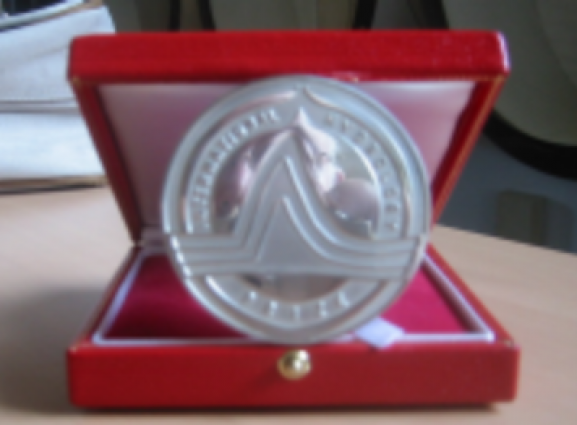 The International Hydrology Prize is awarded annually by IAHS (International Association of Hydrological Sciences), with UNESCO and WMO, to two people who have made an outstanding contribution to hydrological science.

As of 2014, two medals have be awarded under the International Hydrology Prize: the Dooge medal and the Volker medal. Both medals are intended to distinguish outstanding achievements by hydrological scientists but with a different focus. The Dooge medal is aimed at fundamental contributions to the science of hydrology, whereas the Volker medal is aimed at outstanding applications of hydrological science for the benefit of society at large.

Guidelines for both the Dooge and Volker Medals

The International Prizes in Hydrology shall be awarded to persons who have made outstanding contributions to hydrology such as confers on the candidate universal recognition of his or her international stature.

The contribution should have an identifiable international dimension extending beyond both the country of normal work and the specific field of interest of the candidate.

An active involvement in the work of IAHS, UNESCO-IHP or WMO as well as other international organizations in the field of hydrology should be counted as an advantage.

Nominations should consist of:

Nominations should be received by the Secretary General no later than 31 December of the previous year.

Specific guidelines for the Dooge medal

The Dooge medal is particularly intended for hydrologists who have demonstrated scientific excellence, and have made fundamental contributions to the science of hydrology as evidenced by publications in the international scientific literature and other evidence of high standard.

Preference should be given to candidates who have recently exhibited outstanding international leadership in the science of hydrology.

Specific guidelines for the Volker medal

The Volker medal is dedicated for hydrologists who have applied their research and hydrological expertise to the benefit of society, addressing issues of public interest and development.

Applications of hydrology to the benefit of developing countries would count as an advantage.

Preference should be given to candidates who have contributed through both scientific and practical work, and who have made outstanding contributions to the Hydrology community as demonstrated by active involvement in the work of IAHS, UNESCO-IHP, WMO or other international hydrological associations.

The General Assembly of IAHS held at Canberra in 1979 endorsed the principle of an International Hydrology Prize. The prize was awarded annually from 1979 until 2013 on an individual basis in recognition of an outstanding contribution to the science. From 2014 two medals (Dooge and Volker) will be awarded. The Hydrology Division of UNESCO and WMO contribute to the Prize and are represented on the nomination committee. As of the early 2000s,  WMO has been more closely associated with the prize.