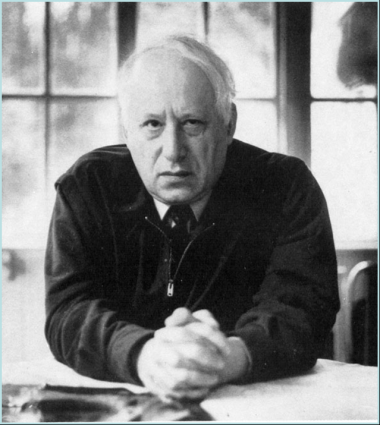 (20.01.1920 – 10.12.2001) is an outstanding Russian scientist who dedicated his life to developing Earth sciences, a member of the Russian Academy of Sciences, recipient of the International Meteorological Organization Prize (IMO golden medal and diploma) for the contribution to the development of climatology.

In 1955-1974, as part of his research Mikhail Budyko assessed land and ocean energy balance components, which was widely recognized in Russia and beyond, laying the foundations of a new area in meteorology – physical climatology (theory of climate). Efforts and work of Mikhail Budyko, his colleagues and students made climate theory one of the most advanced and practically relevant among the existing Earth sciences.

Wide scope of his scientific interests and visionary approach enabled Mikhal Budyko to make a significant and unique contribution to a range of related disciplines: bioclimatology, agroclimatology, paleoclimatology, global ecology, geochemistry, and studies of biological evolution.

His works completed at the end of 1970–beginning of 1980s, were unique and contributed to shaping modern scientific views on the current anthropogenic climate change and future forecasting. Mikhail Budyko was the first to warn the humankind of the unavoidable nature of global climate change resulting from industrial activities. Mikhail Budyko’s 1972 quantitative forecast of average global air temperature increase resulting from rising levels of greenhouse gases in the atmosphere proved to be highly accurate at the end of the XX century.

Further results of this research were published in a co-authored paper “Anthropogenic Climate Change” (1987).

Starting from 1942, Mikhail Budyko’s scientific activities were related to the Main Geophysical Observatory n.a. A.I. Voeikov where he served as Director in 1952–1972. From 1975 and until the end of his days, Mikhail Budyko was the Head of Climate Change Research Department at the State Hydrological Institute. He supervised forecasts of air temperature and precipitation regimes change in certain regions and assessment of planetary climate change impacts on industrial activities and environment.

Over the years of his scientific activities, he authored 24 papers, 2 popular science books on global history and history of literature, and over 200 scientific articles.

Mikhail Budyko was Honorary Member of Russian Geographic Society and American Meteorological Society, was elected as a Deputy of Leningrad district and city councils. He received Order of the October Revolution, Order of the Red Banner of Labour, order of Badge of Honor, Order of Merit for the Fatherland of II degree, medals; was laureate of Lenin Award, awards n.a A.P. Vinogradov and n.a. A.A. Grigoriev; received golden medal n.a. F.P. Litke, golden medal of the International Meteorological Organization, and medal n.a. Robert Horton.

Blue Planet Prize awarded to Mikhail Budyko by Asahi Foundation in 1998 for achievements in environmental research became the greatest recognition of his scientific activities. This prize is the recognition of the outstanding contribution by Academician Budyko into global climatology and ecology.