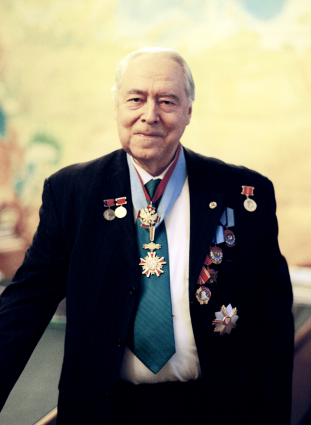 Yuri Antonievich Izrael (15.05.1930-23.01.2014) is a renowned scientist, a prominent scientific administrator, statesman and public figure, born on 15 May 1930 in Tashkent, which is now the capital of the Republic of Uzbekistan. In 1953, he graduated from Physics Department of Central Asian State University.

Upon graduation worked within the Russian (then – Soviet) hydro meteorological system: in 1990-2011 as head of Global Climate and Environment Institute  at the Federal Service for Hydrometeorology and Environmental Monitoring and Russian Academy of Sciences (FSBI ‘GCEI of Roshydromet and RAS’), which he had established to address relevant issues of global climatology and environment. Over the years of work, in 1963 Yuri Izrael defended pre-PhD thesis in physics and mathematics and in 1969 – his PhD thesis. In 1974, he was elected as a Corresponding Fellow of the USSR Academy of Sciences and in 1994 became a full Member of the USSR Academy of Sciences.

Izrael has held significant state and public posts in Russia as well as globally. Particularly, he was the head of the national Hydrometeorological Service, Academic-Secretary at the Oceanology, Atmospheric Physics, and Geography Department of the Russian Academy of Sciences, President of the Russian Ecological Academy, Vice-President of the World Meteorological Organization, Vice-Chairman of the Intergovernmental Panel on Climate Change (IPPC).

Academician Izrael was an outstanding scientist. Despite his busy managerial schedule, he has numerous achievements in various sciences: nuclear geophysics, physics of atmosphere, environmental sciences, oceanology, climatology. These achievements merited many Russian and international awards. Izrael is an Honored Scientist of the Russian Federation, Honorary Member of the   International Environmental Union, recipient of the State Award (Russia, 1981) for successes in environmental protection. He received golden medal n.a. Sukachev of the USSR Academy of Sciences (1983) for outstanding work in environment. In 1992, Izrael was awarded golden medal of the International Meteorological Organization. He holds a golden medal by the international organization Ettore Majorana (Italy) for the work on Tchernobyl accident. He also received the highest award n.a. Sasakava by UNEP for environmental protection activities (1992). On three occasions, Hydrometeorlogical Service awarded Izrael its prize n.a. Academician Fedorov.

Izrael was effective in addressing applied issues. He laid the foundations for science and environmental monitoring and climate monitoring in Russia devoting particular attention to radiation monitoring, particularly in relation to the Tchernobyl accident tragedy, created radionuclide pollution atlases.

Since 1988, Izrael actively participated in the activities of the  Intergovernmental Panel on Climate Change (IPCC). When the First assessment report was prepared by IPPC (issued in 1990), Izrael served as a co-chair of the Working Group II, and during the preparations of the Third and Fourth Assessment Reports by IPPC (issues in 2001 and 2007 respectively) he was Vice-Chairman of IPPC. Since the foundation of IPPC, Izrael was coordinating IPPC activities with the Russian Federation.

For 12 years Izrael served Vice-President of WMO. Areas of his particular interest included methodologies to collect data and assess ‘impact’ component. Upon Izrael’s initiative, the new concept of the World Climate Programme for the first time included the following area: Studying Climate Impacts on Nature and Humans.

Izrael always paid particular attention to organizing environmental forums. Among other events, he initiated the First (1979) and the Second (1990) World Climate Conferences. These largest scientific fora brought together prominent scientists and politicians and had key impact on the further development of Earth sciences and the development of the global weather and climate observation system.

Academician Izrael was widely recognized and appreciated by science communities and governments, by heads of governments and international experts. Izrael always had the best interests of science at heart and was guided by the profound understanding and appreciation of the laws governing scientific developments. His contribution to the development of modern Earth sciences is invaluable.