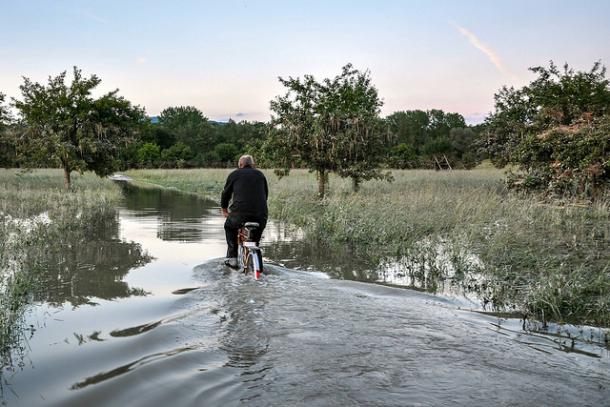 Climate, sometimes understood as the "average weather,” is defined as the measurement of the mean and variability of relevant quantities of certain variables (such as temperature, precipitation or wind) over a period of time, ranging from months to thousands or millions of years. The classical period is 30 years, as defined by the World Meteorological Organization (WMO).  Climate in a wider sense is the state, including a statistical description, of the climate system.

2. What is the climate system?

The climate system is continually changing due to the interactions between the components as well as external factors such as volcanic eruptions or solar variations and human-induced factors such as changes to the atmosphere and changes in land use.

3. What is climate change?

Climate change refers to a statistically significant variation in either the mean state of the climate or in its variability, persisting for an extended period (typically decades or longer). Climate change may be due to natural internal processes or external factors such as persistent changes to the atmosphere or changes in land use.

Article 1 of the the United Nations Framework Convention on Climate Change (UNFCCC) defines "climate change" as:  "a change of climate which is attributed directly or indirectly to human activity that alters the composition of the global atmosphere and which is in addition to natural climate variability observed over comparable time periods.”

4. Is our climate changing?

Experts generally agree that the Earth is warming up. How much this has been directly attributed to or caused by human activity – the effects of which are extremely difficult to assess – is not clear, though increases in greenhouse gases such as carbon dioxide are more than likely taking their toll.

5. How is WMO tackling climate change?

WMO and the United Nations Environment Programme (UNEP) established the Intergovernmental Panel on Climate Change (IPCC) in 1988 to take stock of scientific knowledge of the threat of human-induced climate change. The IPCC is now recognized as the authoritative international, scientific and technical voice on climate change. WMO hosts the IPCC Secretariat.

6. What is climate variability?

Climate Variability is defined as variations in the mean state and other statistics of the climate on all temporal and spatial scales, beyond individual weather events.

The term "Climate Variability" is often used to denote deviations of climatic statistics over a given period of time (e.g. a month, season or year) when compared to long-term statistics for the same calendar period. Climate variability is measured by these deviations, which are usually termed anomalies.

7. What is the difference between Climate Variability and Climate Change?

In essence, climate variability looks at changes that occur within smaller timeframes, such as a month, a season or a year, and climate change considers changes that occur over a longer period of time, typically over decades or longer. A key difference between climate variability and change is in persistence of "anomalous” conditions - when events that used to be rare occur more frequently, or vice-versa.

In statistical terms, the curve of the frequency distribution representing the probability of specific meteorological events changes. The curve may be modified either in amplitude, shifted about a new mean, or both.

Care must be taken not to confuse variability with change. Many regions of the world experience greater variability, climatologically speaking, than do others. In some parts of the world, or in any region for certain time periods or parts of the year, the variability can be weak (i.e. there is not much difference in the conditions within that time period). In other places or time periods, the conditions can swing across a large range, from freezing to very warm, or from very wet to very dry and exhibit strong variability.

A certain amount of this is understood and accepted, instinctively, by the people in a region. What is "normal" for Denver, Colorado in terms of the frequency of precipitation events (high variability) would be "abnormal" for London, England (low variability). Thus, any single event, such as a severe tropical cyclone, cannot be attributed to human-induced climate change.

Occasionally, an event or sequence of events occurs that has never been witnessed before (or recorded before), such as the exceptional hurricane season in the Atlantic in 2005. Yet even that could be part of natural climate variability. If such a season does not recur within the next 30 years, we would look back and call it an exceptional year, but not a harbinger of change. Only a persistent series of unusual events taken in the context of regional climate parameters can suggest a potential change in climate has occurred.

The IPCC is conducting considerable efforts in trying to determine, for various hydrometeorological hazards such as tropical cyclones or tornadoes and related events such as flash floods, whether there is substantial and credible evidence of human-induced climate change. The upcoming fourth assessment report should provide more clarity on this matter. 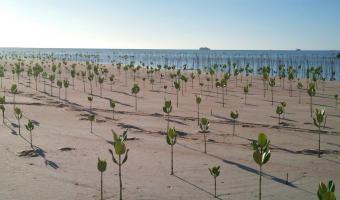 Climate describes the average weather conditions for a particular location and over a long period of time. We study the climate, its variations and extremes, and its influences on a variety of activities including human health, safety and welfare to support evidence-based decision-making on how to best adapt to a changing climate.

Improving the understanding of the climate system for the benefit of societies coping with climate variability and change.

Improving the availability of, and access to, reliable climate data, monitoring and forecasts.