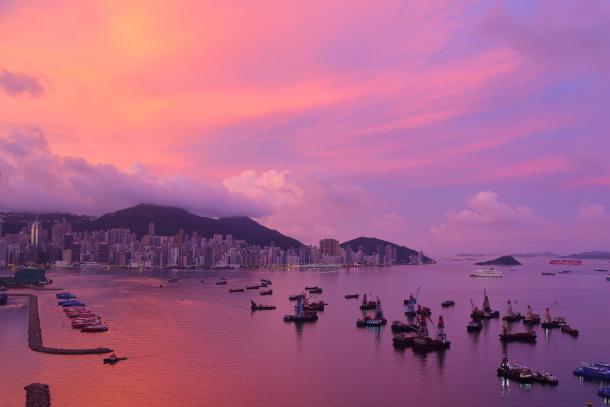 Up to 90% of world trade is transported on ships. Ocean economic activities are forecast to increase rapidly, doubling in size from US$ 1.5 to 3 trillion by 2030. International cooperation and collaboration are key to finding impactful global solutions in support of the sustainability and safety of people, property and the planet. (Ocean Obs Report Card)

The United Nations Decade of Ocean Science for Sustainable Development aims to provide the Science We Need for the Ocean We Want. Ocean science can help us to address impacts from weather and climate, climate change, marine environmental emergencies including pollution, ocean acidification, the loss of marine species and degradation of marine and coastal environments (UN Ocean Decade)

The 2017 Global Ocean Science Report found that ocean science accounts for only between 0.04% and 4% of total government research and development expenditures worldwide. The Ocean Decade helps to mobilize partnerships and increase investment in priority areas where action is urgently needed.

How does the ocean shapes weather and climate?

The ocean acts as the Earth’s thermostat and conveyor belt. It absorbs and transforms a significant portion of the sun’s radiation hitting the Earth’s surface and it provides heat and water vapor to the atmosphere. Enormous horizontal and vertical ocean currents form and circulate this heat around the planet, often for thousands of kilometres.

There are many oscillations in Earth’s ocean and atmosphere that occur naturally over different time and geographic scales. The best known is El Niño, a warming of surface waters in the eastern tropical Pacific Ocean. Together with, La Niña,  these make up two of the three states of the constantly changing El Niño/Southern Oscillation (ENSO) that can affect weather patterns around the globe.

Around 90% of the excess energy that accumulates in the earth system due to increasing concentrations of greenhouse gases, goes into the ocean. Warm ocean temperatures helped fuel a record-breaking Atlantic hurricane season in 2020, with 30 named tropical storms, including 13 hurricanes and six major hurricanes, with direct impacts in many countries in the Atlantic basin, Caribbean Sea and Gulf of Mexico. There were also intense tropical cyclones in the Indian and South Pacific Oceans in 2020. (WMO State of Climate report)

El Niño/La Niña Southern Oscillation (ENSO)
How does the work of WMO ensure safety at sea?

The International Convention for Safety of Life at Sea (SOLAS), administered by the International Maritime Organization (IMO), is generally regarded as the most important of all treaties concerning the safety of ships. The first version was adopted in 1914, two years after the sinking of the Titanic.

The Arctic is warming more than twice as rapidly as the global average. Sea-ice loss is expected to lead to an increase in maritime traffic. Less ice does not mean less danger because there is a constant and often hidden threat. The consequences of a major accident in Arctic waters would be devastating for the environment. It is important to improve forecasts and warnings of both weather and ice conditions in Polar and marginal regions.

About 40% of the global population live within 100 km of the coast. WMO works to protect communities from coastal hazards, such as waves, storm surge and sea level rise, through improved Multi Hazard Early Warning Systems and impact-based forecasts.

How are ocean observations collected?

Over 2 million in situ ocean observations are reported daily from the systems which are part of the Global Ocean Observing System. (Ocean Ops Report Card 2020)

Important ocean observations are collected by roughly 4 000 Argo robotic floats which make temperature, salinity, pressure and biogeochemical measurements. In Greek mythology, Argo was the ship in which Jason and the Argonauts set sail to search for the golden fleece. Argo floats sail the 21st century seas and Argo is teamed with a satellite called JASON-1 that measures the shape of the ocean surface.  Data from Argo and JASON-1 together monitor the ocean currents, the oceans’ transport of heat and freshwater around the globe and sea-level rise.

Animal borne ocean sensors are used to retrieve a variety of variables in several chronically under-sampled regions. These variables include temperature and salinity profiles, but also fluorescence, oxygen or surface wave and wind activity. These observations also provide data on animal movements and behaviour, beneficial to protecting the animals and their habitats. (Ocean Ops Report Card 2020)

Global Ocean Observing System
How is the role of climate in forecasting climate variability?

There are many naturally occurring ocean-atmosphere oscillations in the Pacific, Atlantic and Indian Oceans, that cause climate variability. The most well-known is El Niño and La Niña. These are opposite phases of a natural climate pattern across the tropical Pacific Ocean that swings back and forth every 3–7 years on average. Together, they are called ENSO (pronounced “en-so”), which is short for El Niño-Southern Oscillation (NOAA). El Niño is Spanish for "the little boy" or "the Christ child," and was named by Peruvian fishermen when they noticed changes in anchovy populations around Christmas more than 100 years ago.

The longest El Niño in the modern record lasted 18 months, while the longest la Niña lasted 33 months. 2016 was the warmest year on record because of a combination of the strong El Niño and climate change. The 2020/2021 La Niña has peaked, but its impacts continue.

The Arctic Oscillation  involves a seesaw pattern in atmospheric pressure between the North Pole and middle northern latitudes. Its negative (cool) phase often means that much of the U.S., as well as Northern Europe and Asia, experience cold and stormy winters. (Woods Hole Oceanographic Institution)

What is the link between the ocean and climate change?

Around 90% of the excess energy that accumulates in the Earth system due to increasing concentrations of greenhouse gases, goes into the ocean. (WMO State of the Global Climate 2020 Report) As the ocean warms, its volume increases. Thermal expansion, as well as the melting of ice sheets in Greenland and the Antarctic and glaciers all over the world are causing sea levels to rise. Sea level has risen by around 15 cm during the 20th century. IPCC projections show that sea level rise can reach around 30 cm to 60 cm by 2100 even if greenhouse gas emissions are sharply reduced and global warming is limited to well below 2°C.

The ocean absorbs around 23% of the annual emissions of anthropogenic CO2 to the atmosphere.

CO2 reacts with seawater and increases its acidity. It endangers organisms and ecosystem services, including food security, by endangering fisheries and aquaculture. It also affects coastal protection by weakening coral reefs, which shield the coastline, and tourism. A 100-150% rise in ocean acidity is projected by 2100, affecting half of all marine life. (UN Stats, SDGs Report 2020, Goal 14)

In 2020, 82% of the ocean experienced at least one marine heatwave, causing significant impacts to marine life and the communities that depend on it.

The State of the Global Climate 2021