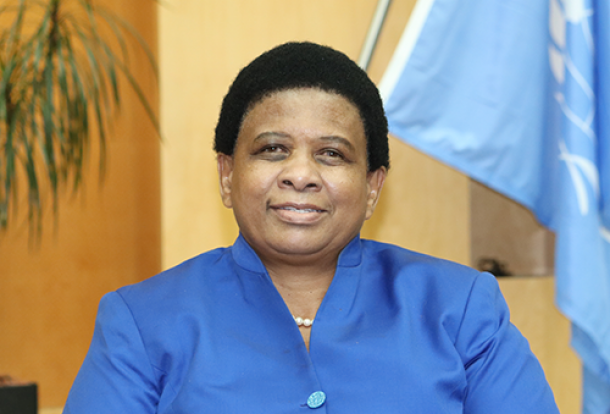 Third Vice-President of the WMO

Agnes Lawrence Kijazi was elected Third Vice-President of WMO by the Eighteenth World Meteorological Congress in 2019 for a four-year term beginning immediately after the closure of the Congress. She has been the Director General of Tanzania Meteorological Agency since 2011.

She was inspired to become a WMO Vice-president in order to take on a leading role in the global implementation of the WMO Vision, Strategic and operational Plan on reforms to better address the Global challenges of the 21st Century. She is convinced that the WMO reform will be of great benefit to Members and she will strive to ensure that no Member is left behind.

Agnes Kijazi rose from the lowest rank in the field of meteorology, as a Meteorological Assistant, to become the Director General of Tanzania Meteorological Agency in 2011. She has contributed significantly in the field of meteorology. She became the first woman in the East African Region to hold the top post in a national service and to be elected to the WMO Executive Council. She has also extensively contributed in the development and implementation of various WMO programmes at country, regional and global levels. Prior to her appointment as Director of the Agency, she was Director of its Technical Services from 2007 to 2011 and Manager of Modelling and Verification from 2004 to 2006.

Dr Kijazi has been active at the international level in WMO, the United Nations and as Vice Chair Person of the Meteorological Association of Southern Africa (MASA). She is an advocate for gender mainstreaming within the National Hydrological and Meteorological Services and in the entire WMO Community.

She obtained her Bachelor in Science (major in meteorology) with honours in 2000, then completed a Masters in Environmental Science in 2003 and a PhD in Meteorology (Climate Prediction, Extreme Events) in 2009.