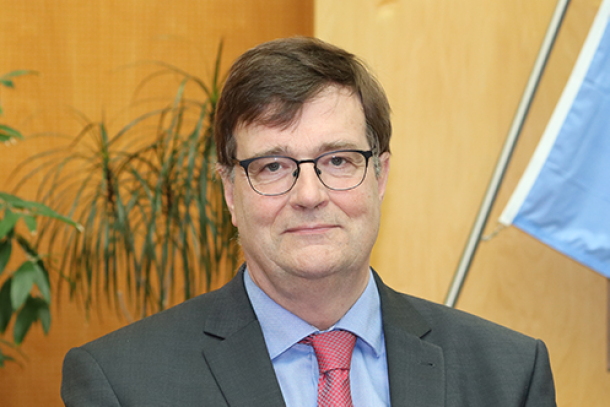 Gerhard Adrian was elected by the Eighteenth World Meteorological Congress in 2019 for a four-year term beginning immediately after the closure of the Congress. This is his first term as President of WMO.

After 19 years of collaboration within the World Meteorological Organization (WMO) bodies and committees, Gerhard Adrian became President of WMO in June 2019.  His main interest is to strengthen the WMO through a sustainable strategic plan and effective and efficient governance structures. He aims to implement the Governance Reform approved the Eighteenth World Meteorological Congress (Cg-18) in a way that preserves the motivation and commitment at all levels and to ensure that all Members can contribute equally to the programmes of WMO.

Gerhard Adrian has served as President of Deutscher Wetterdienst (DWD) since July 2010 and was its Vice-President from 2006 to 2010.  From 1999 to 2011, he was the Head of Business Area Research and Development and Member of the Executive Board of Directors of DWD. Prior to that, from 1997 to 1999, he was the Head of the Mesoscale Climate and Climate Modelling section at the Institute for Meteorology and Climate Research, Karlsruhe Research Centre.

In addition, Professor Adrian has remained active in academia as a professor, lecturer and researcher:

Professor Adrian obtained his graduate degree in Meteorology in 1981 then completed his PhD in Natural Sciences in 1985.

Activities in the governance of WMO

Activities in the governance of European intergovernmental organizations