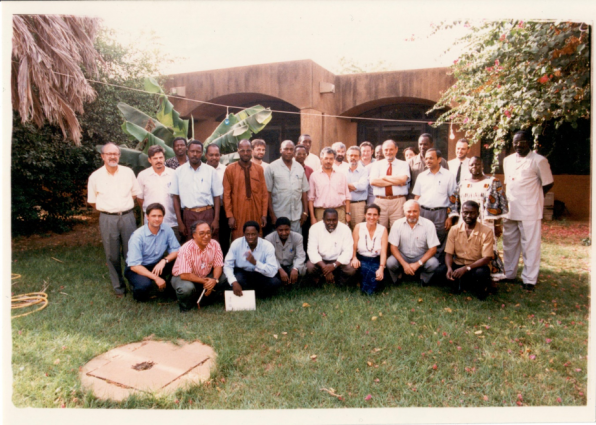 The WMO Regional Training Centre in Italy (RTC-Italy), operated by the Institute of BioEconomy of the National Research Council (CNR-IBE), began its activities in the mid-1980s, although officially it was designated by WMO as an RTC only in 1997 and reconfirmed during the sixty-eighth session of the WMO Executive Council in 2016. In 2019, WMO, RTC-Italy and the Permanent Representative of Italy with WMO signed a new Memorandum of Understanding during the International Conference on Climate Services for West Africa, held in Rome, in the presence of the main stakeholders in West Africa: the directors of meteorological services of the 17 countries members of the Permanent Inter-State Committee on Drought Control in the Sahel/Economic Community of West African States (CILSS/ECOWAS).

The initial project for an RTC in Italy slowly developed in the course of the continuous and fruitful collaboration between Prof. G. Maracchi and the WMO Agricultural Meteorology Division. From 1980, the institute hosting the WMO RTC was known as CNR-IATA (Institute of Environmental Analysis and Remote Sensing Applied to Agriculture). In 2000, it became CNR-IBIMET (Institute of Biometeorology) and, in 2019, it was renamed CNR-IBE. Prof. G. Maracchi, who was initially the scientific coordinator of the training centre and director of CNR-IATA, became the first director of CNR-IBIMET. He was succeeded by Dr Antonio Raschi and, finally, by Dr Giorgio Matteucci, the current director of CNR-IBE.

For several years, Prof. G. Maracchi, in his position as a member of the Regional Association VI Working Group on Agricultural Meteorology, and of CAgM maintained a fruitful collaboration with WMO. It was his belief that training and capacity building are essential if communities are to face, through adaptation measures, the consequences of climate change on agriculture, and develop disaster risk reduction strategies. Several scientists from CNR collaborated with him over the years, from the foundation through the consolidation of the RTC (among others, in chronological order: Zipoli, Di Vecchia, Sabatini, De Filippis and Tarchiani). The Permanent Representatives of Italy with WMO have also provided key support.

At the beginning of the 1980s, the time was just right: agrometeorology was becoming a discipline of world interest after the great droughts that had hit Sub-Saharan Africa in previous years. Two devastating droughts affected the entire semi-arid belt of Sub-Saharan Africa, from the Atlantic Ocean to the Red Sea in 1972–1973 and then again in 1983–1984. During the 1984 rainy season, many rural areas received zero or insignificant rainfall. Agricultural production was at a minimum and the impact on local populations was devastating also because their resilience was already undermined by a decade of recurrent drought.

For this reason, the international meteorological community and its governments launched programmes to support affected populations, further driven by the pressure of a public opinion shaken by the dramatic images from the affected regions broadcast by television and newspapers worldwide. Thanks to the intervention of the media, this catastrophic situation was finally recognized worldwide.

Public and private initiatives flourished everywhere and, in 1982, Italy launched a project for the Sahel, promoted by the Italian Ministry of Foreign Affairs and International Cooperation, in favour of the CILSS member countries most exposed to famine and degradation of environmental resources.

This initiative of the Italian government, promptly supported by WMO, focused on two axes: the Integrated Rural Development Programmes, among which the best known is the Keita programme in Niger and, beginning in 1985, the AGRHYMET Programme, promoted by WMO in support of the CILSS regional centre for the prevention and management of food crises. The year 1985 can be considered a milestone in the history of collaboration between Italy (through CNR-IATA and the budding RTC), WMO and AGRHYMET. After a visit to Florence in 1987 to discuss the proposed activities, Dr D. Rijks, then Chief of the WMO Agricultural Meteorology Division, stated:

I have been impressed by the way the Director of the Institute aims to use four basic activities: ecophysiology, remote sensing, agrometeorology, instrumentation and information sciences in a consolidated manner in the implementation of the project. It appears to me that this project forms a strong basis for the extension of the pilot project activities to other areas of the region (Rijks D., 1987: Report on Mission to Florence, 29–30 April 1987, WMO).

At that time, CNR-IATA started to organize its training activities in a more systematic manner in order to establish a WMO Regional Training Centre in Italy. The seed had been planted, and the active participation in the tenth session of CAgM, held in Florence in 1991, with a lecture of Prof. Maracchi on “Agrometeorological information for agricultural systems subjected to climatic variability”, was greatly appreciated by the participants (Commission for Agricultural Meteorology (CAgM) – Abridged Final Report of the Tenth Session (WMO-No. 775)).

The AGRHYMET Programme was the first of a series that consolidated the collaboration between WMO, the RTC in Italy and the AGRHYMET Regional Centre in the development of methodologies and tools for agriculture and in education and training in their application. It was a great example of international cooperation and understanding.

The Early Warning and Forecast of Agricultural Production (AP3A) project was conducted from 1995 to 2002. It was financed by the Italian cooperation agency and involved once again WMO, the Italian RTC and the AGRHYMET Regional Centre. The main purpose was to provide capacity development in the target countries to mitigate the effects of extreme events such as drought, desertification and famine in semi-arid regions of West Africa.

The Italian cooperation agency financed another project from 2003 to 2008: Monitoring Vulnerability in the Sahel (Suivi de la Vulnerabilité au Sahel (SVS)), led by WMO in collaboration with AGRHYMET and CNR. The project focused on the integration of vulnerability analysis and early warning systems, consolidated the results of previous projects, and strengthened collaboration with individual countries.

Thanks to AP3A and SVS, numerous other initiatives were launched leading to research projects with scientists from Burkina Faso, Mali, Niger and Senegal. Such initiatives always included training offered by the Italian RTC in agrometeorology and disaster risk reduction in agriculture.

Today the Italian RTC serves WMO Members in Regional Associations I and VI in the key areas of agrometeorology, response to climate change and climate services. Such activities are carried out in the framework of a number of international initiatives such as DIPLOMAzia, the Programme in Support of National Investments in Senegalese Agriculture – Technical Assistance, Research and Development (Programme d'Appui au Programme National d'Investissement dans l'Agriculture au Sénégal (PAPSEN/PP/AT&RD)) and ANADIA, and in collaboration with international organizations (the United Nations Convention to Combat Desertification (UNCCD), the Food and Agriculture Organization of the United Nations (FAO) and the African Centre of Meteorological Applications for Development (ACMAD)), regional climate initiatives (the Mediterranean Climate Outlook Forum (MedCOF), Seasonal Climate Forecasts for West Africa (Prévisions Climatiques Saisonnières en Afrique de l’Ouest (PRESAO)) and European Cooperation in Science &Technology (EU-COST) Actions and other RTCs.

In the last 20 years, RTC-Italy has offered 29 short-term classroom courses, for a total of 520 hours of training to 536 participants. In parallel, it has offered several other training activities, mainly for Sahelian countries, in the shape of formal short-term courses and workshops, distance learning modules and long-term hands-on training (2 to 4 months) at its premises in Florence.

As in the past, the RTC develops domestic and international training activities taking into consideration the educational needs of recipient countries. Highly qualified and experienced trainers offer lectures and workshops, covering the following main topics:

The collaboration between RTC-Italy, the Sahelian countries and WMO is as intense now as it was in the past, and the Italian Ministry of Foreign Affairs and International Cooperation recently co-funded two major projects: ANADIA 2.0, a training and research project in Niger, and a training Programme on Climate Change Adaptation and Disaster Risk Reduction in Agriculture (PACC-RRC), for CILSS/ECOWAS countries.

ANADIA 2.0 is a bilateral Italy-Niger project aiming to contribute to the development of sustainable agriculture, through the adaptation of production systems to climate change, to make them less vulnerable to extreme events by supporting food security. In order to achieve these objectives, the project is designed to strengthen the capacities of different actors at the national and local level. It provides methodologies, theoretical and practical training modules, and practical case studies; it increases awareness and disseminates information on project results.

The PACC-RRC programme aims to reduce the impact of natural disasters and climate change on the agricultural sector in West Africa.

As part of those two projects, the RTC offered short-term courses, workshops and seminars, always stimulating the collaboration between different institutions and countries in order to strengthen the regional network that brings together the community of technical services involved in climate change adaptation and disaster risk reduction.

The T.O.P. on Seasonal Forecast is a set of online resources whose goal is to enhance knowledge of the theory and operational use of seasonal climate forecasts. The material, created by well-known researchers and scholars for RTC-Italy training initiatives, has been reorganized in a new conceptual structure, partially re-edited, and enriched with videos and other resources. The aim is to make this freely available to other trainers so that they can develop their own courses, facilitating knowledge sharing and dissemination.

TOPaCS is a new distance-learning initiative developed by RTC-Italy. It provides a permanent e-Learning platform offering training courses on different topics related to climate and risk analysis and management.

The main goal is to build knowledge and skills through customizable learning paths within the Compendium of WMO Competency Frameworks (WMO-No. 1209), and to ensure consistency with other WMO education initiatives, such as the WMO Global Campus.

T.O.P and TOPaCS, developed in accordance with the suggestions from the WMO Education and Training Office, represent contributions of RTC-Italy to the WMO Global Campus: an initiative based on the WMO tried and tested practice of linking Members’ facilities in order to create a coordinated network of existing WMO-related education and training institutions.

Identifying learning needs; designing, co-designing and offering courses; collecting and reorganizing educational material and redistributing it to a wide community, all these tasks represent new challenges for the WMO RTC community. This is only possible if the RTC network is robust and motivated, and determined to use novel tools and Internet facilities such as learning platforms or course management systems, with the ultimate goal of providing people and institutions with the learning opportunities needed for well-functioning meteorological, hydrological and climate services. The 35-year-long history of cooperation between WMO, RTC-Italy and AGRHYMET demonstrates that this is not only feasible, but a win-win strategy to be pursued with determination.