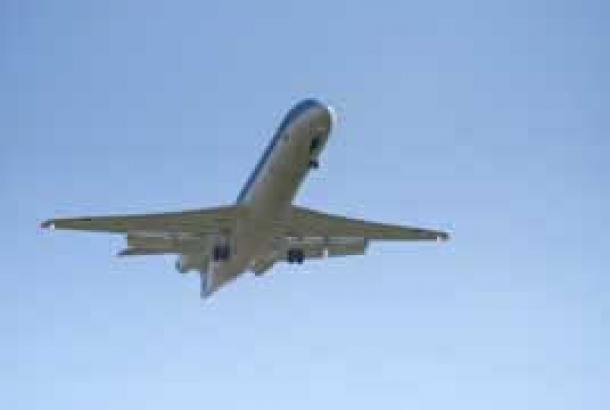 How aircraft observations benefit the safety, efficiency and environmental footprint of international civil aviation and contribute to the Global Observing System.

The WMO Aircraft Meteorological Data Relay (AMDAR) Panel was established in 1998 for a worldwide application of the inherent observing capability of aircraft.

It consists of representatives of WMO Member countries that participate directly in the AMDAR programme and provide funding for its activities. Other bodies with direct interest include providers of airline communications, aircraft avionics and sensors, and research institutes.

Since the beginning of flight, weather observations taken from aircraft have made an important contribution towards understanding the current state of the atmosphere so that better weather forecasts can be made.

Today, the AMDAR system facilitates the fully automated collection and transmission of weather observations from commercial aircraft, as well as some military and private aircraft. The primary dataset from each aircraft participating in the AMDAR programme includes position in time and space, wind speed and direction, and ambient temperature.

AMDAR data are used operationally to support a wide range of meteorological applications and are considered by WMO to be an essential source of basic upper-air information. Some aircraft also provide information on moisture, turbulence and ice accretion. They have similar accuracy to radiosonde data and can be used in the same manner.

Perhaps one of the most important attributes of AMDAR data is their cost: a vertical sounding of temperature and wind derived from an aircraft on ascent or descent produces a profile that is typically less than 1 per cent of the cost of a radiosonde sounding. In addition, in some areas of the world, AMDAR soundings provide the only information available on the detailed vertical structure of the atmosphere.

A specific AMDAR software package, together with onboard sensors, flight computers and aeronautical communications systems, collect, process, format and transmit the data to existing ground stations via satellite, VHF or HF radio links. The transition management is performed via the Aircraft Communications Addressing and Reporting System (ACARS) or other reporting system. Once on the ground, the data are relayed to the global network of National Meteorological Services and other authorized users as shown in Figure 1.

Currently, around 230 000 observations per day are available via the WMO Global Telecommunication System (GTS) both en-route and from ascents and descents in the form of profiles for many airports in different parts of the world.

AMDAR data from en-route aircraft are a vital component of the global observing network over ocean areas, deserts, near the poles and other areas normally devoid of in situ observations.

The availability of very frequent profile information and location of jet streams contributes to the increased accuracy of wind and temperature information to be used in flight planning (optimization of routes) and air traffic management, e.g. continuous descent, reduced holdings and maximum benefit of free flight.

Two new alternative AMDAR systems have been developed that offer flexibility and independence from conventional aviation systems and have their own internal and external data-processing and monitoring capabilities. Tropospheric Meteorological Data Reporting (TAMDAR) comprises a complete sensor package (position, time, wind, temperature, humidity, turbulence, icing) and communications system. The Automated Flight Information Reporting System transmits data from either existing or specially installed sensors to the airline and National Meteorological Service using another independent communication system. Both systems are suitable for smaller aircraft that normally do not have ACARS, but can also be installed on almost any aircraft.

Operational evaluation trials in Canada and the USA and at the European Centre for Medium-Range Weather Forecasts indicate that good-quality observations have a significantly positive impact on numerical weather prediction and operational forecasting. These systems are ideally suited to areas not normally serviced by the larger aircraft equipped with ACARS, such as in Africa and developing countries in general.

The quality of observations obtained from each reporting aircraft is routinely monitored by meteorological centres and the information is fed back to airlines. These benefit directly by using it to help maintain the high standard of aircraft performance.

Studies show a conclusive, positive impact of AMDAR data in weather-forecast operations. Real-time use of high-quality vertical profiles of AMDAR temperature and wind in Australia, Canada, Hong Kong (China) and the USA has proved to contribute significantly to the improvement in short-to medium-term forecasting applications. They are particularly useful for nowcasting situations, where conditions are changing rapidly and are therefore of special use to the aviation industry. Areas where they have proved to have significant impact include:

Improved information pertaining to the location and strength of jet- stream cores has also led to improved forecasts of major storm events.

Special collaborative programmes between countries operating long-haul-flights from Europe, North America and other developed regions to countries in data-sparse regions that are unable to develop local programmes of their own have helped target areas of special meteorological interest like the squall lines over West Africa.

In recognition of its importance and value as a reliable source of high-quality upper-air data, AMDAR is being integrated into WMO’s World Weather Watch Global Observing System. AMDAR will also form an important component of the Global Earth Observing System of Systems (GEOSS) that will be supported by WMO and countries committed to providing and using AMDAR data. More aircraft, implemented with AMDAR software and flying northerly and southerly routes have, in addition, been activated as a contribution to International Polar Year 2007-2008.

Work continues to expand the number of additional weather elements to be reported in the next couple of years. A small number of operational aircraft in the USA have begun to report water vapour/humidity, but several countries have plans to install sensors over the next few years. After testing, these water-vapour sensors are expected to give full information of comparable quality at significantly reduced cost near airport locations as quasi-vertical atmospheric profiles. It is anticipated that such information will significantly improve all forecast operations.

Specific to aviation, turbulence information is used operationally at some forecasting centres and new capabilities are being tested and evaluated, together with icing information.

Widespread use of water-vapour sensors may be used to determine, predict and avoid areas or layers of super-saturation with respect to ice, thus reducing the climate-active Cirrus and contrails caused by aviation, reduce fuel consumption and carbon dioxide output. Aviation contributes 2 per cent of global carbon dioxide emissions and it is expected that efforts in improving efficiency will limit this number to 3 per cent by 2050, despite the envisaged industry strong growth.

Again, the uses of frequently updated profile information for the en-route, approach and departure sectors of flight will permit the further optimization of flight operations, derivation of maximum benefit from accurate wind information and a reduction in the impact of weather on delays, holdings and diversions.

Such information will not only allow the mitigation of low-level wind shear and turbulence, as well as low visibility operations, but will also support new concepts such as continuous descent approaches and early runway selection, avoiding complex re-arranging of arrival patterns in case of significant changes in surface wind.

Continuously updated information on the strength and height of low-level temperature inversions derived from ascent and descent profiles of aircraft will be beneficial for the prediction of local air quality.

The increased spatial and temporal distribution of AMDAR data will make an important contribution to finer resolution numerical weather prediction models that are being introduced. It has already been demonstrated in some countries that high-resolution AMDAR data improve both broad-and mesoscale forecasts.

It is therefore anticipated that, as coverage extends to other regions, these low-cost data will similarly provide more accurate forecasts. At the same time, a global optimization scheme will help ensure the lowest cost possible for the collection of these data. Such schemes, already operational in Europe and under development in Australia and the USA, are assessing the need for additional data on the basis of existing reports, with a flexible selection algorithm determined by the Meteorological Service requiring the data, which will determine the location, time interval and horizontal and vertical spacing of the data to be downlinked. As the measurement itself does not incur any real cost and the downlinking of the data is the main cost driver, such a selection algorithm could be optimized for a composite observing system, targeted observations and could even be situation-dependent, e.g. in case of severe weather developing.

The expected growth of air traffic in the developed world and even more so in the emerging economies of South-East Asia, requires a radically new concept of air traffic management to maintain safety and efficiency.

With both air routes and terminal aerodromes operating at or near their maximum capacity, weather events such as convective activity, snowfall, ground icing, low ceilings and visibility could severely impact the flow of air traffic. Many a weary traveller has experienced such difficulties when inclement weather strikes at times of maximum demand near peak holiday times!

Both in Europe and North America, ambitious new concepts of air traffic management are being developed with a 20-year time frame in an attempt to optimize the use of airspace and terminal aerodromes based on four-dimensional trajectory methods, a high degree of computer-to-computer data exchange in a networked fashion and a high degree of automation, with the human being taking on a new role as supervisor rather than as manual operator of the system.

These concepts will rely to a large extent on highly accurate, timely and ubiquitous meteorological data that are available within a system-wide information management framework. It is envisaged that aircraft data, due to their low cost, frequent update rate and high quality, will form an essential source of the data required for such concepts.