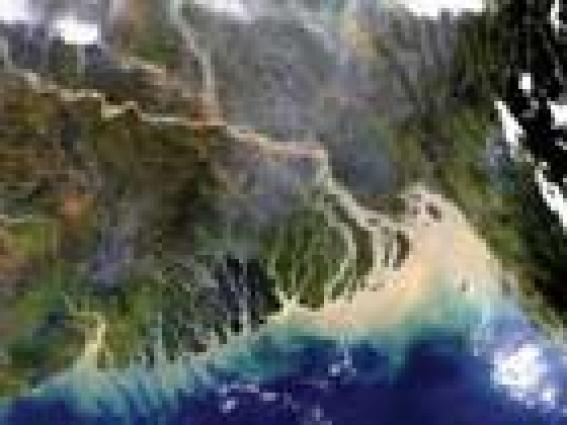 The Prime Minister concluded: “We have no other alternative but to reject all our short-sighted needs and remain united to our pledge of a safe, secure world for our future generations.”by Her Excellency Sheikh Hasina 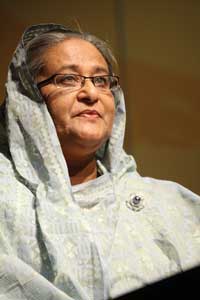 Her Excellency Sheikh Hasina, Prime Minister, Government of the People’s Republic of Bangladesh, addressed 16th World Meteorological Congress in Geneva, 16 May 2011. She spoke about an issue she described as “very close to my heart” – climate change.

Ms Hasina congratulated the World Meteorological Organization (WMO) for making the world aware of the impacts of climate change, and the Inter-Governmental Panel on Climate Change (IPCC) for its success so far in climate talks. She told delegates that she participated in the 3rd World Climate Conference (WCC-3) after assuming the office of Prime Minister in 2009.

“It was because I was keen to draw the attention of the world to Bangladesh’s dire predicament with climate change. In WCC-3, we took a resolve for collective action to save our planet, followed by the hope rekindled, for a consensus in Copenhagen, and then keeping our faith alive for working collectively in reducing greenhouse gas emissions and halting global warming, in Cancun,” she said.

She also congratulated Co-Chairs of the High-Level Task Force for their timely presentation of the report on WMO’s Global Framework for Climate Services (GFCS), as mandated in Geneva during WCC-3. Implementing GFCS would be a significant step in the world’s collective efforts in combating the impacts of climate change.

“It would be an essential first step in improving our ability to predict climate, and to help users incorporate the information into their decision-making. GFCS needs, therefore, to operate at global, regional and national levels,” the Prime Minister added. “There is also merit in establishing the Inter-Governmental Board on Climate Services with membership of all countries.”

The Prime Minister Hasina reminded delegates that adequate allocation of funds for capacity building in vulnerable countries is vital and that industrialized countries with historic responsibility for climate change challenges to “generously invest funds for adaptation, and for easy access of green technology at an affordable price”, to vulnerable economies.

All countries “should assume their due responsibility”, but the burden falls heavily on industrialized countries. The fund should be adequate, sustainable and easily accessible to meet the full cost of adaptation. Contribution to this fund should be over and above the usual official development assistance, based on population and vulnerability ratio.

Bangladesh on the frontline

“This climate fund must be made operational soon,” she urged. “Today, climate change poses a serious challenge to human existence. Among the frontline countries confronted by the impacts of climate change, stands Bangladesh.”

The Prime Minister noted that for several decades her country has been experiencing a gradual increase in erratic floods, river erosion, cyclones, earthquake murmurs, tidal bores, encroachment of salinity in the low lying coastal areas due to sea rise, and desertification. These natural disasters have been threatening the population’s food, water and health security, biodiversity and ecological balance as well as diminishing livelihood options and income levels.

Since Bangladesh’s independence in 1971, the country has spent more than US$ 10 billion on adaptation, including flood management schemes, protection of riverbanks, cyclone shelters, polders and elevation of road levels. These measures were accomplished by diverting funds allocated for development priorities. As a result, this has slowed development, including achievement of the Millennium Development Goals (MDGs).

However, the country has registered a Gross Domestic Product (GDP) growth rate of 6 per cent for the last decade, and remained on course to achieving the MDGs targets by 2015. “This is due to the ingenuity, resilience and hard work of our people,” Prime Minister Hasina said.

Bangladesh is a negligible emitter of greenhouse gases and yet is among its worst victims. The country has adopted a 134-point Climate Change Strategy and Action Plan. The country is also carrying out its “moral responsibility” in terms of mitigation obligations. Agricultural practices are being changed, crops attuned to climate change are being developed — 20 per cent of the land will be covered with forests by 2015 to create a large carbon sink. Bangladesh is following “a low-carbon path to development” with renewable energy covering 5 per cent of its energy requirements by 2015, and 10 per cent by 2020.

Other major adaptive measures include capital dredging of rivers to ensure flow water and to enhance navigability, strengthening coastal belts with mangrove plantations, modernizing disaster management systems, expanding social safety-net programmes and creating jobs. Without waiting for assistance from others, the Government is using funds from its own Climate Change Trust Fund, established with US$ 200 million. In addition, a Multi-Donor Trust Fund with the support of development partners has been established.

“The amounts are, however, meagre in comparison to the needs. Bangladesh is most vulnerable to climate change in terms of scale and intensity,” she added, pointing out that scientific studies estimate a one metre rise in sea level by 2050 would submerge one-fifth of the country, displacing over 20 million people. Mass migration to cities is inevitable impacting livelihoods, biodiversity, food, water, sanitation and basic infrastructure.

Such migration could “cause complications with neighbours and enhance cross-boundary crime such as human trafficking, gunrunning and drugs”, Prime Minister Hasina warned. She called for a “new legal regime” under the UN Framework Convention on Climate Change (UNFCCC) to ensure “social, cultural and economic rehabilitation” of climate-induced displaced migrants.

Through decades of living with natural disasters, Bangladesh has engaged in disaster preparedness, which is now a major focus in the country’s development planning. For effective management, a book is now available – Standing Orders on Disasters – outlining functions of all concerned agencies to handle emergency situations.

In 2009, the government developed a National Plan for Disaster Management 2010–2015 in line with commitments under the Hyogo Framework for Action. This aims to reduce vulnerability of the poor to manageable levels. To date, 14 000 cyclone shelters have been constructed. A new approach to managing disasters is the total participation of government and non-government bodies and the local community. A national preparedness committee is in place to formulate strategies for rescue operations and 64 000 volunteers have been registered in the coastal areas. The capacity of early warning systems of concerned organizations has also been strengthened and mobile telephony is in use for early warning. The meteorological offices have been modernized. However, they require greater science-based facilities and capable human resources.

The Prime Minister called on GFCS to facilitate international cooperation in science-based climate prediction and services. She also called on the international community to craft a binding agreement on cutting greenhouse gas emissions in face of the “looming danger” of climate change.

Prime Minister Hasina pointed to the missed opportunities in Copenhagen and Cancun and made a plea for collective action in Durban. “Today some countries face climate challenges, but tomorrow, the whole world will. To save our planet and ourselves, we have to reduce greenhouse gas emissions. This has to be on the basis of equity and the principle of common but differentiated responsibilities with the participation of all countries,” she said.

The Prime Minister concluded: “We have no other alternative but to reject all our short-sighted needs and remain united to our pledge of a safe, secure world for our future generations.”