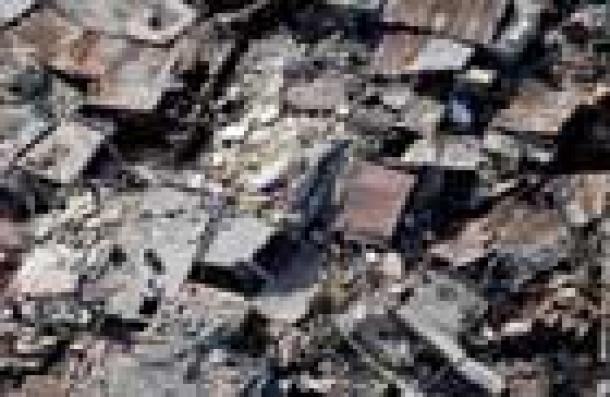 Climate services are a key to supporting Haiti’s effort to rebuild its country, after the devastating earthquake early this year.

35 seconds of devastation, decades of vulnerability

The earthquake that hit Haiti on 12 January 2010 was the strongest earthquake in 200 years. Measuring 7.0 on the Richter scale, it lasted 35  seconds. What emerged after that short time was a different country – transformed by a disaster of almost unprecedented scale and complexity.

Nearly a third of the population – some 3 million people – were affected. More than 230  000 lost their lives and another 300  000 were injured. The earthquake crippled Haiti’s capital and economic heart, Port-au-Prince, and destroyed hundreds of thousands of homes in the city and elsewhere. There were 1.3  million people who sought refuge in makeshift settlements in and around the capital, while half a million more sought refuge with family and friends in other parts of the country. Damage and economic losses from the earthquake are estimated to be US$  7.9 billion – over 120 per cent of Haiti’s 2009 GDP.

It was not the power of the earthquake alone that killed so many Haitians, but the chronic poverty and vulnerability of the population as well. Haitian society has struggled throughout its history to plan for and manage frequent extremes in weather, particularly hurricanes and intense rainfall. While devastating, the earthquake has offered an opportunity not just to reconstruct, but to “re-found” the country, as its President has said.

Haiti’s semi-arid tropical climate, frequent hurricanes and mountainous terrain have combined with environmental degradation, political instability and extreme poverty. In this context, it is understandable that planning for climate risks has historically been weak.

Food security is an issue. About two thirds of Haitians work in agriculture – mainly subsistence farming – yet the sector only accounts for a third of GDP. Agriculture is acutely vulnerable to damage from frequent hurricanes, floods and landslides. The rough, mountainous terrain limits the land available for cultivation and irrigation. Local production provides just 45 per cent of Haiti’s food consumption. Dependence on food imports makes the country – especially its poorest citizens – highly vulnerable to increases in international food prices.

Deforestation and environmental degradation make things worse, increasing flooding and landslide risks and reduces soil cohesion, so that fertile farmland is lost to erosion. Only two per cent of Haiti’s original forest cover remains, as most has been cut for charcoal, timber and agriculture. More than 80 per cent of the country’s watersheds are critically or totally deforested. Approximately 1 600 hectares of agricultural land are lost to soil erosion each year. Infertile areas make up a quarter of all land under cultivation.

With 75 per cent of the population dependent on precarious rural employment, many Haitians have sought employment in urban areas, but there are no new jobs.

The poor often have no choice but to occupy the lowest valued land in disaster-prone areas such as riverbanks, unstable hillsides, flood plains, coastal areas and deforested lands. Poor quality housing is prevalent, and it is not constructed to withstand the impacts of natural hazards.

Haiti has a hot and humid tropical climate. Rainfall occurs throughout the year, with major rains in April to June and August to November. The average annual rainfall is 140 to 200 cm, unevenly distributed. On the path of tropical storms that originate in the Atlantic and Caribbean Sea, Haiti is hit by one tropical storm every 2-3 years on average and by a major hurricane every 6-7 years. Drought-prone areas are on the rise, due to environmental degradation and subsequent desertification.

Haiti is feeling the impact of climate change. The percentage of days with very warm temperatures has increased considerably since the 1950s, with the number of consecutive dry days decreasing and the number of heavy rainfall events increasing. Sea-level rise is expected to increase the risks of floods, storm surge, erosion and other coastal hazards, putting settlements and people at risk.

The Haiti National Meteorological Service and the National Water Resources Service lost office facilities, equipment and a staff member during the earthquake. WMO coordinated an international effort among WMO Members, its own technical programmes, UN bodies and other international partners to help these Haitian institutions dealing with weather, water and climate. The aim was to support humanitarian response and early recovery during the 2010 rainy and hurricane seasons, with a view to longer-term reconstruction. A WMO-led task team provided assistance, including Canada, Cuba, Dominican Republic, France, UK and USA. WMO also explored fund-raising opportunities for these Haitian institutions by including the assessment results in consolidated UN disaster management appeals, the Haiti Reconstruction Fund and by approaching bilateral donors. This has resulted in stronger Haitian services. 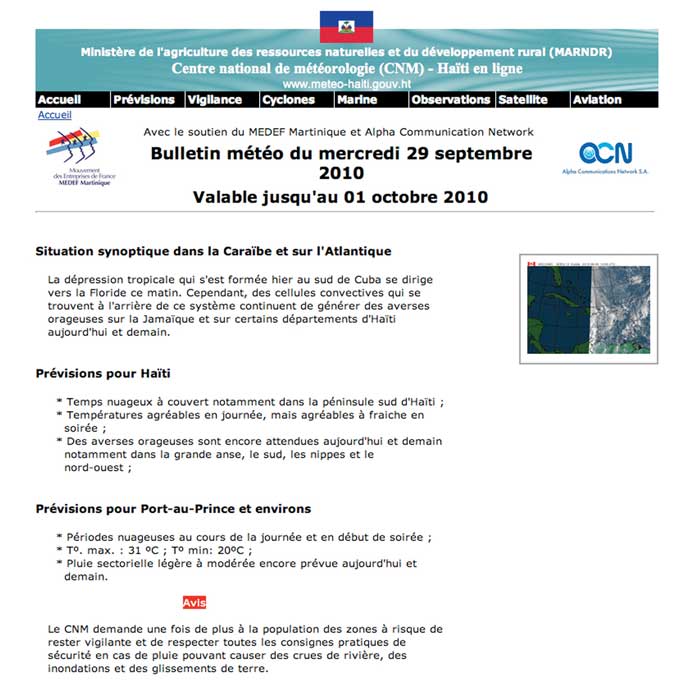 Climate services for recovery and development

Rebuilding Haiti does not – and cannot – mean returning to the situation that existed before the earthquake. To rebuild the country on new foundations will require addressing first the urgent humanitarian situation, and then sustaining the effort to restart and develop economic, governmental and social activity while reducing Haiti’s vulnerability to natural hazards.

Climate services are vital to this effort. Management of climate risks – and now the new risks presented by climate change – is not peripheral to Haiti’s development. Improved access to climate information is needed to guide recovery and development in disaster risk management, agriculture, natural resources management and infrastructure development.

Climate services are critical for rebuilding devastated areas and constructing new settlements and development centres, as well as for supporting infrastructure such as ports, airports and energy facilities. Weather forecasts are needed for operating Haiti’s airports and ports, which are vital for the development of tourism and industry.

The daunting task facing the Haitian Government and its partners after the catastrophic earthquake is to rebuild a country already weakened by two centuries of political instability, natural disasters and environmental devastation.

Haiti, the least developed country in the Western Hemisphere, occupies the westernmost third of the Caribbean island of Hispaniola, which it shares with the Dominican Republic. Its rapidly-growing population is approximately 10 million, densely packed into a land area of 27 750 km2. In 2004 the United Nations intervened to help establish security, re-launching democratic politics with peaceful elections that produced a legitimate, accountable government.

Poverty is widespread and natural resources are badly depleted. More than 70 per cent of the population survives on less than US$ 2 per day, and 46 per cent are undernourished. Nearly half the population has inadequate access to clean water. Haiti’s health indicators are the worst in the Western Hemisphere, with nearly half of deaths attributable to HIV/AIDS, respiratory infections, meningitis and diarrhoeal diseases, including cholera and typhoid.

Flash floods from hurricanes, tropical storms or heavy rainfall are devastating. Exacerbated by deforestation, landslides often occur after heavy rain. Eroded watersheds wash down on poor floodplain communities in river valleys or on the coast.

For example, in less than one month in 2008, two tropical storms and two hurricanes devastated Haiti, killing 793, leaving 80 0 000 people destitute, and causing economic losses equivalent to 15 per cent of GDP, particularly in agriculture and road infrastructure. With the entrenched problems that have faced the country for decades, the most vulnerable members of the population have been consigned to a vicious circle of poverty and increasing disaster risk. 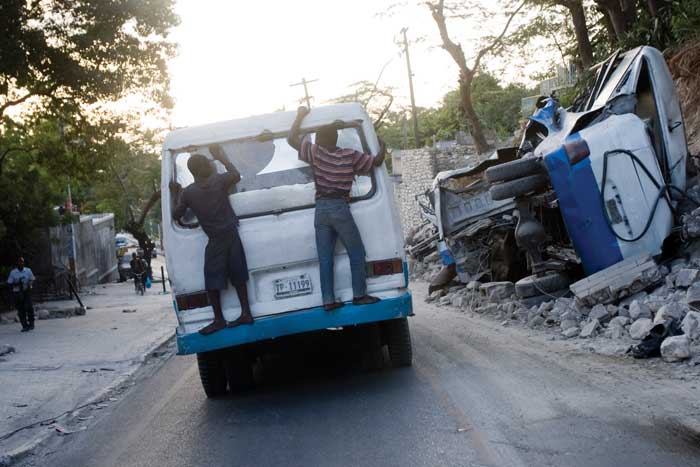 Responsibility for climate services is divided between the National Meteorological Centre (CNM) and the Service National des Resources en Eau (SNRE), the later operating the hydroclimatological network and related data management. Unfortunately, their relatively limited operational capacities were weakened further by the disaster. The capacity to access essential local data and produce forecasts, early warnings for hydrometeorological hazards and other services was severely constrained, compounded by unreliable telecommunications.

Since the earthquake, several countries and organizations have supported the Haitian national meteorological services, especially to prepare for the 2010 hurricane season. However, sustained capacity building efforts are required to improve national capabilities and strengthen regional links. For instance, Haiti would benefit greatly from being part of a regional cooperation framework, in order to leverage resources, expertise, data exchange and forecasting capabilities.

Training and long-term educational opportunities are needed for Haitian technical staff, forecasters and management. An example is the need to spend time in an advanced climate centre where research is undertaken the impact of climate change in the Caribbean. They also need adequate basic resources, including computers and communications facilities.

Access to local data from a modern, sustainable observing system is also very important. Water and rain measurement networks need to be upgraded, and an agroclimatological network established. Databases are needed to store current and historical observational data, and archives need to be digitised. Systems to forecast and spread weather and climate information require significant improvement.

Access to effective climate services is vital to Haiti’s recovery and long-term sustainable development. The Global Framework for Climate Services will provide a mechanism to sustain climate services in Haiti even when current international attention eventually decreases. It can bring experts together, prioritise actions, raise funds and coordinate spending. As it evolves, it may also provide technical help to carry out regional programmes, while leveraging regional networks and resource.

* Office for the Coordination of Humanitarian Affairs (OCHA)