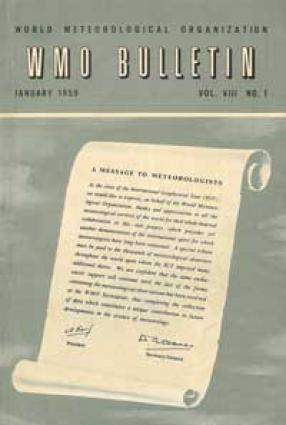 WMO and the development of meteorology

The immense tasks thus placed before the Organization have been successfully carried out, in spite of relatively modest budgets, thanks to the generous invitations from our Members, the ability and unselfishness of our experts and to hard work. Most of the latter was the result of unflagging devotion to duty on the part of the Secretariat staff under the leadership of the late G. Swoboda—who was responsible for ensuring that the vital transition from the former IMO was made without a hitch—and subsequently under that of the dynamic D.A. Davies, both of them efficiently seconded by the Deputy Secretary-General, M.R. Rivet.

Fortunately, all this effort was not in vain. The many achievements of which WMO has every right to be proud include the following:

All these achievements are in harmony with the aims of our Organization, one of the most important of which is to “further the application of meteorology to aviation, shipping, agriculture and other human activities”. More special attention should perhaps be given in the near future to another or our aims, namely “to encourage research and training in meteorology and to assist in coordinating the international aspects of such research and training”.

In the meantime, the Organization has had to tackle some entirely new and urgent problems such as those connected with the use of atomic energy and the introduction of commercial jet aircraft. Thanks to the cooperation of those Members which have willingly lent the services of experts in these fields, the Executive Committee has been able to take appropriate and effective action. …

The collaboration of our Organization has been solicited in another important field, that of hydrology, because it has become apparent that there is need for intergovernmental coordination of hydrological observations and investigations throughout the world. The Economic and Social Council of the United Nations has recommended that the responsibilities of WMO be extended to cover a large part of this field. … a preliminary inquiry carried out by the Secretariat has shown that many Members would be in favour of such a step, which would increase the importance and prestige of the Organization. The final decision lies with Third Congress.

… I think that the results obtained by WMO are such as to convince the governments of its Members that the best possible use has been made of the contributions which they pay. … F.W. Reichelderfer [has] pointed out quite rightly that “they [meteorologists] have of necessity practised their profession with minimum facilities and meagre information and data—facilities that would be regarded as less than reasonable standards in other physical sciences”. This spirit of economy—which is a sort of professional characteristic of meteorologists—has resulted, when transferred to the international level, in WMO being one of the best investments amongst the international organizations.

We can justifiably be proud of the results already obtained, but we must ensure that this very praiseworthy desire for economy does not lead to harmful cheese-paring. To use an anatomical metaphor, our Organization can be slim but it must not run the risk of becoming rickety.

This is particularly important at the moment, for meteorology is now undergoing an evolution which with the passage of time may one day be considered as a revolution. The traditional charts showing the isobars, fronts and air masses, used exclusively until quite recently, are now supplemented by contour charts which may in turn be partly replaced by tropopause and streamline charts. Our knowledge of the general circulation, jet streams and the structure of the tropopause is constantly growing. Study of the upper winds between 20 and 40 km north of the Tropic of Cancer show, for example, that in addition to the seasonal variations in the easterlies, there are also variations in speed and direction which merit closer study in order to determine their cause and their relationship with the development of the wind field, up to at least the level of the tropopause. Moreover, it is possible to confirm beyond all doubt the existence of a layer with a mean thickness of 7 km, lying 2 km above the tropopause, in which wind speed decreases considerably and the temperature variations are very small: a layer, therefore, where the conditions, free from clouds and probably of turbulence, are ideal for long-distance flights by the turbo-propelled aircraft of tomorrow. Thus, every day brings new confirmation of the notion of the worldwide interdependence of all atmospheric phenomena.

The charts prepared by the meteorological services formerly covered areas of varying, but often limited, extent. Today, the drawing of hemispheric charts will have to become a part of the daily work, at least in a certain number of services; planetary charts will, in their turn, soon be introduced into routine practice.

Parallel with the increase in the intensity of meteorological work, there is also an expansion in its scope. Observations of radiation, ozone, the chemical composition of the air and radioactivity, which hitherto were not very widespread, are acquiring increasing importance; they are no longer made only at isolated stations, but also in organized networks. This development has been speeded up by the International Geophysical Year and it would be regrettable if these new networks were to be closed down.

New techniques are on the point of making a valuable contribution to this mass of data. It is still too early to make a complete inventory of all that meteorology may expect to obtain from the extra-atmospheric observations made by means of rockets or artificial satellites. We can already imagine, however, that the measurements of the Earth’s albedo which these observations include, will be of the greatest value to meteorologists. The first photographs taken over vast areas of clouds also open up very encouraging perspectives.

The transmission and application of this immense accumulation of information raises considerable problems, for which solutions can only be found by ever-expanding international coordination which our Organization alone is able to ensure, provided that it has the necessary means. All meteorological services should preferably possess their own transmission networks. They would then be sure of being able to obtain directly and with the least possible delay the basic synoptic data essential for the regular operation of their forecasting services, which have to provide the information needed for a large number of human activities dependent on changes in meteorological conditions.

The progress which is being made in numerical weather forecasting has led to the increasing use by meteorological services of electronic computers. The efficiency of these machines is to a great extent linked with the possibility of satisfying their huge appetite for fresh observations. This new obligation makes it more than ever essential to keep the international meteorological telecommunications plans up to date.

One of the heaviest and most urgent tasks faced by meteorologists is the processing of the International Geophysical Year data. Immense benefits for humanity may be expected from this, the most important scientific enterprise of all time. All meteorologists are certainly prepared to make every possible effort to ensure that these benefits are acquired without too much delay.

There is a proverb—Union is strength. For many years meteorologists throughout the world, intent on problems relating to the atmosphere, which recognizes no political frontiers, have shared the same preoccupations. In this undisputed field of understanding, the human contacts happily made possible by our meetings lead to the development of ever closer links of friendship. It is this fraternal unity, transcending all our changes of fortune, which offers the greatest encouragement in the face of the immense tasks which are already known and those which are still to come.

A. Viaut
President of WMO

It is with regret that we have learned of the death of Sir Gilbert Walker, C.S.I., F.R.S., on 4 November 1958 at the age of 90 years. Sir Gilbert was educated at St Paul’s School, London, and Trinity College, Cambridge, where his mathematical interests were mainly in the fields of dynamics and electromagnetism. It was only in 1903 when he became director-general of observatories in India that he became closely associated with meteorology.

Sir Gilbert will be remembered principally for his outstanding work in establishing correlations between meteorological phenomena in different parts of the world which formed the basis for his method of forecasting the course of the Indian monsoon. He was also responsible for initiating some of the early investigations into atmospheric electricity and the upper air. In 1924 he succeeded Sir Napier Shaw as professor of meteorology at the Imperial College of Science and Technology in London where he remained until his retirement in 1934. During this period he gave much attention to research work on the formation of clouds.

For more than 20 years Sir Gilbert also played a very active part in the work of the IMO. During much of this time he was a member of the International Meteorological Committee and also served on a number of commissions dealing with many different aspects of meteorology.

After a long and distinguished career which brought him many honours Sir Gilbert pursued his research work in retirement with as much enthusiasm as ever. On his 90th birthday he was reported to be collaborating in the writing of a textbook on the aerodynamics of the flute.

* An accidental release of radioactive material into the atmosphere which occurred at an atomic installation in the United Kingdom.

* This article is a personal contribution by T.E.W. Schumann, former director of the Weather Bureau of the Union of South Africa, and for many years actively interested in international meteorology.