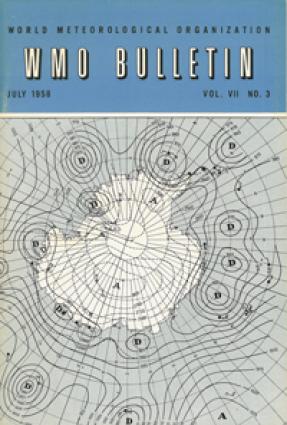 One of the most spectacular achievements of the International Geophysical Year (IGY) is the establishment of over 25 meteorological stations on the Antarctic continent through the cooperative efforts of 12 countries ... As a result, the synoptic weather maps being prepared ... are undoubtedly the most comprehensive ever produced; apart from their immediate operational value, they will provide material for research workers who are endeavouring to solve some of the outstanding problems of Antarctic meteorology. The picture on the cover is a simplified version, supplied through the good offices of the president of WMO, André Viaut, of the synoptic map for 0600 GMT on 7 January 1958, the original of which was prepared at McMurdo Sound. The full lines represent the mean sea-level isobars and the dashed lines are the isohypses of the 85-mb surface. With the IGY approaching its end, may people are wondering if it will be possible to continue this magnificent example of international collaboration in the Antarctic.

The July 1958 Bulletin contained articles on meteorology and long-haul civil turbine-powered aircraft operations, emerging needs in development of the world’s rivers, WMO and hydrology, meteorology in Ghana, observational characteristics of the jet stream, and the new building for the central office of the Deutscher Wetterdienst.

… Members of WMO were requested … to comment on a proposal, arising from the first session of the WMO Panel on Water Resource Development, that the Organization should accept responsibilities in hydrology similar to its present responsibilities in meteorology. The majority of the Members which replied supported the proposal, the full implementation of which would probably require an amendment of the WMO Convention. Most of the other Members agreed that WMO should increase its activities in hydrology, for example by setting up a Technical Commission for Hydrology... .

... To enable the Secretariat to handle the increased workload, the Panel suggested that a hydrological unit should be established with a minimum total staff of six persons, to be recruited progressively during the third financial period (1960-1963) ... a 15 per cent increase in the WMO budget, based on the maximum expenditure authorized for the second financial period, would provide a reasonable sum for all the new hydrological activities. …

... [The tenth session of the Executive Committee] finally agreed unanimously to recommend that WMO’s future policy should be that, in addition to those aspects which fall within the common ground of meteorology and hydrology (precipitation and evaporation), WMO should accept responsibilities in all other aspects of hydrology which involve meteorological considerations It was also generally agreed to support the view that a WMO Technical Commission for Hydrology should be established at Third Congress.

Emerging needs in development of the world’s rivers

A new view of the opportunities and needs for river development has been taking shape among national and international agencies. The streams of the land surface—ranging from great rivers ... to smaller ones—increasingly are seen as suited to integrated development and as requiring international scientific cooperation to achieve their wise use. ...

This emerging view of the potentialities of water resource development is a product of converging technological, political and economic trends which are at work over large areas of the world. These, in turn, create special needs which seem to call for international organization on a world scale.

Three lines of thinking and action play a major part in shaping this unfolding view of water resources. First is the concept of integrated river basin development. The idea of orderly marshalling of water resources of entire river basins for multiple purposes to promote human welfare has taken hold in many countries ... Such integrated programmes typically combine several elements. They employ the device of the multiple-purpose dam which stores water to serve two or more purposes. Advancements in techniques of building concrete structures, moving large volumes of earth and transporting electric power economically over long distances have made it practicable to use a single structure to produce electricity, control floods, promote navigation and supply water for municipal and irrigation purposes. Such systems and their accompanying land and auxiliary programmes in many areas are regarded not as ends in themselves but as means of promoting desirable social change.

... large-scale application of techniques of integrated river development did not begin until the 1930s ... Today, there are numerous efforts in the same direction ... such schemes will increase in number over the years immediately ahead in response to social and economic pressures and partly because and partly in spite of international political complications.

A second line of thinking relates to the strategy of water resources regulation in world economic growth. Rapid and gigantic growth of the global population combined with low levels of living prevailing over large areas foster a lively interest in means by which the process of economic development with its associated social changes may be stimulated. River-basin schemes are among the investment possibilities now being canvassed with enthusiasm in many regions ... It would be a mistake to regard all proposed water construction projects as necessarily sound or timely in aiding under-developed countries to accelerate their rate of economic growth. Some unduly expensive projects may lack social justification. Some heavy capital outlays for dams and canals may be wise at one stage of a country’s development but unwise at an earlier time.

... it seems likely that large-scale planning and construction of water projects will be in order in the decades immediately ahead. The pressure for new land through irrigation and for new energy sources through hydro-electric installations will be great. Even accepting optimistic estimates of the spread of nuclear power facilities and of improved farming techniques, many water programmes will be required. The increasing urbanization of the population, which is proceeding faster in Asia and Africa than in Europe, is placing heavier demands upon streams for industrial water and also is loading them with polluting wastes.

In a unique way river-basin development commands the imaginative interest of peoples around the world as a symbol of efficient utilization of water and land resources. This seems particularly the case in less well developed areas ... economically attractive river development might claim several hundred billions of dollars in investment in the next 40-50 years. Outlays on this scale would not seem out of proportion to probable investment and saving rates.

A third line of thinking has to do with the political conditions in which river development of that magnitude might take place … a large proportion of the world’s rivers are international. Indeed, most of the great streams ... drain more than one country. The total number of international steams exceeds 125. In place after place, the international character of these rivers has been an obstacle to their integrated development. It is easier to obtain agreements as to river navigation rules than as to water allocations and new regulation schemes. Several of the international streams are now the subject of bitter controversy. Others are certain to become involved in disputes unless sound measures are taken to substitute constructive cooperation for tardy recriminations. Regardless of the international character of the drainage areas it seems likely that international action will be necessary in several directions to prevent needless waste, delay and friction in the new developments.

... There is persistent need for focusing the interests of both governments and specialized agencies upon methods, procedures and standards for studies affecting the shape and results of river development. Much more attention should be directed, for example, to means of evaluating water resources—both surface and underground—and to estimating prospective requirements. Obviously, many nations and several specialized agencies are working on aspects of these problems ... In general, the pace and interchange of scientific research in the water field will have to be stepped up if maximum effectiveness is to be gained for the huge new programmes.

The field of hydrology is especially lacking in concerted attention. Although the meteorological borders of the field are covered by WMO, hydrology is a kind of no-man’s-land into which many national agencies and a few international agencies venture without any clear definition of responsibility. It now seems evident that several tasks affecting hydrology and hydrological data should be tackled on a world scale as a base for much of the future river development.

Hydrological instruments and survey methods should be standardized so that comparable observations may be available on stream discharge, moisture storage water quality and similar phenomena. This may be urgent in the international basin but is important in all areas. Data publication also should be standardized.

Much more systematic work on recording of basic measurements should be encouraged. In some major basins the observations are pitifully sparse and discontinuous.

Not only are international observation networks lacking but there are only a few instances ... of well articulated river forecasting services. These also should be promoted in the international basins.

It would be unfortunate, however, if emphasis on what must be an expanding programme in hydrology were to centre solely upon networks and data collection. Of equal if not greater importance is the personnel sufficiently trained to make discriminating use of the scanty data available.

It will be impracticable in numerous areas to wait for 20 years of records before beginning the design of additional engineering works. A concentrated amount of imaginative analysis may be far more fruitful than expensive outlays for pedestrian data collection.

Some aspects of the hydrological cycle are not well understood. The movement of water through unsaturated formations, for example, requires more searching examination ... with the knowledge already at hand it is beginning to be practicable to make reasonable estimates of some critical hydrological features where long-term records are missing. Thus, river-forecasting methods, which are vital to successful operation of systems of storage dams and navigation control works, are improving rapidly. One of the limiting considerations in dam and spillway design is the frequency or maximum probable volume of flood flows resulting form intense rainfall and this apparently may be estimated from upper-air observations. The amount of water available to runoff in a drainage basin after accounting for evaporation and transpiration from soil surfaces is another critical factor for design of storage works. Here, the water-balance analysis may suggest ways of determining volumes of water from temperature and precipitation records without requiring long stream discharge measurements.

... these and other analytical methods and their associated data must be widely tested, applied and refined if they are to serve as they should in the design and operation of new water-regulation structures. Some methods and findings have wide applicability in basins in dry areas and humid areas alike. In other cases it may be desirable to compare results from widely separated areas, such as humid, tropical mountain regions having similar hydrological conditions. In any event, international collaboration on a worldwide scale seems in order.

Current investments in new river development programmes and the prospect for the spread of such works to other areas makes it likely that the next few decades will see continued activity in this process of changing the time and place of water on the land surfaces. Whether those new dams and control works are wisely designed and operated to avoid disaster and to promote social growth will depend in no small measure upon steps which are taken in the years immediately ahead to improve the basic services in hydrology.