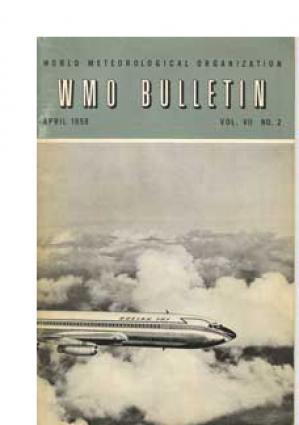 The contents of the April 1958 Bulletin covered meteorological transmissions in Europe, reducing evaporation from reservoirs, aviation aspects of mountain waves, the 50th anniversary of the Australian Bureau of Meteorology (see MeteoWorld/February 2008/Anniversaries) and Part II of “The conquest of the third dimension”, as well as reports of the second session of Regional Association III, the second session of the Commission for Synoptic Meteorology and activities of regional associations and technical commissions.

... To make mountain flying safer, a considerable amount of research has been conducted in recent years to gain better understanding of airflow over mountains. Probably the most important information, from the aeronautical viewpoint, which emerged from this research concerns the standing waves which not uncommonly form to the lee of mountain barriers. Many past air accidents can now be explained in terms of these so-called mountain waves which, because of the vertical currents they set up, the severe turbulence they sometimes generate and their effect on the accuracy of pressure-altimeter readings and air navigation can constitute a real danger to the unwary pilot.

A visible evidence of mountain waves is provided by the stationary or quasi-stationary lens-shaped clouds which form downwind from mountain ridges and are arranged in bands parallel to these ridges. These clouds are appropriate to an airstream undergoing vertical oscillations associated with standing waves. As many as ten or more of these cloud bands have been observed at one time, whilst two or three bands are commonly seen.

Other cloud types associated with mountain waves are the cap clouds and the rotor clouds. The former are low-hanging clouds with their base near or below mountain-top level and their relatively smooth top only a few thousand feet above the ridge. Their major portion is found over the windward slope. To an observer on the downwind slope, the clouds resemble a bank or a wall with fibrous fingers reaching partway down the lee slope. Rotor clouds appear in the form of stationary rolls at varying distances downwind from the ridge. They develop in standing eddies under the crests of the waves.

Among the most important aspects of mountain waves from the viewpoint of aviation are the vertical currents associated with these waves. Downward currents of 5-10 m/s are not at all uncommon. In one extreme case ... , a pilot estimated the vertical currents to be of the order of 40 m/s. ... when mountain waves develop, downdraught areas generally occur immediately downwind from the mountain crest, so that an aircraft flying upwind towards the ridge, if caught in one of these downdraughts, might not be able to regain enough altitude in time to clear the mountain.

... By far the most important and most common seat of severe turbulence in mountain waves is the area of the rotor clouds. Violent sharp-edged gusts exceeding 12 m/s have been measured in some Sierra waves and experienced pilots have reported complete loss of control of their aircraft for short periods while flying in the rotor area. Rotor turbulence generated by smaller ridges is generally not quite so severe; nevertheless it often constitutes a source of discomfort and possible hazard to aircraft.

Other aspects of mountain waves which adversely affect the performance and safety of aircraft are the air navigation errors caused by the fluctuations in the horizontal wind speed between crest and trough, the errors in pressure-altimeter readings and the increased probability and intensity of aircraft icing.

Detecting the presence of mountain waves

The easiest waves to detect are those accompanied by the typical wave clouds. Mountain waves, however, may occur with cloudless skies or with completely overcast skies. Under these circumstances other means of detecting the presence of waves must be employed. The possibility of using routine radiosonde ascents for this purpose has recently been demonstrated.

The possibility of detecting the actual presence of mountain waves does not eliminate the necessity for determining the meteorological conditions which are favourable for wave formation and for advising pilots when these conditions obtain and waves are likely to occur. …

The above requirements are in substantial agreement with theoretical results obtained by applying the method of perturbations to the flow of a stably stratified current crossing a mountain. The most successful results to date have been obtained by R.S. Scorer who considered a frictionless, steady, laminar and isentropic flow, but allowed for the variation of lapse rate and wind with height. By applying the criterion obtained by Scorer to a representative radiosonde ascent made in the unperturbed current, it is possible to determine without much difficulty whether waves are likely to develop in a given air mass.

Theory also gives an insight into the factors affecting the wavelength and the amplitude of the standing waves. A resonance effect is shown to exist such that large amplitude waves occur only if the natural wavelength of the air stream corresponds to the size of the mountain ridge. Since the former increases with the wind speed, larger mountains would require stronger winds for large amplitude waves. This fact is confirmed by observations.

Much useful information can be given to a pilot with regard to the effect of mountain waves on his air route by applying the theoretical and observational results briefly discussed above. …