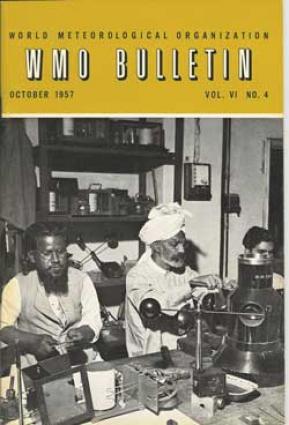 A fuller account of the October Bulletin 50 years ago is available in the October 2007 edition of MeteoWorld on the Web.

Contents in the October 1957 Bulletin covered the second sessions of the Commission for Instruments and Methods of Observation and of the Commission for Aerology, international coordination of meteorological activities, International Geophysical Year, Hamburg comparisons of long-wave radiometers and meteorology as a three-dimensional science, as well as activities of the technical commission and regional associations and the Technical Assistance Programme.

The opening of the International geophysical Year on 1 July 1957 was appropriately heralded by a burst of solar activity ad a severe magnetic storm which were duly announced to observing stations all over the world by the ALERT warning system. For meteorologists the IGY began a few minutes before midnight on 30 June 1957 when several hundred radiosonde balloons were launched to measure the temperature, pressure and humidity to heights of up to 30 km.

That is was possible to attain unanimous decision on the technical aspects of this major project [world weather charts] is a good illustration of what might be termed “the IGY spirit”, thanks to which countries have shown themselves willing to make considerable sacrifices in order to contribute to the success of the IGY.

The Hamburg comparisons of long-wave radiometers

The Hamburg comparisons of long-wave radiometers and radiation balance-meters represent a very satisfactory success of international cooperation in the field of meteorological radiation research; they have led to a thorough knowledge of the problems arising in such investigations and to a better understanding of the various constructions.

… It is to be hoped … that the occasion of the International geophysical Year will increase the interest for the study of long-wave radiation processes in the atmosphere and of the radiation balance of the ground.

New building for the Secretariat

Since 1951, when the Secretariat moved from Lausanne to Geneva it has been housed in a barrack-type building which was offered temporarily by the Canton of Geneva.

The question of a permanent building for the Secretariat was discussed as early as first Congress but the realization of this project has always been delayed by various difficulties.

As a result of its growth during the last six years, it has become increasingly difficult for the Secretariat to perform its functions adequately in this temporary building both on account of its unsuitable nature and its inadequate size. Last year it became necessary to rent three flats in the neighbourhood of the Secretariat to house the Technical Assistance Unit and the International Geophysical Year Meteorological Data Centre, and storerooms have also had to be rented in other parts of the town. This dispersal of accommodation has proved to be very inconvenient.

After various possibilities of constructing a permanent building for the Secretariat had been carefully investigated, the Executive Committee in January 1957 agreed that the offer of the Canton to construct this building in the Avenue Giuseppe-Motta near the Place des nations should be put before the Members of the Organization for their final approval. After a postal ballot the Members approved the proposal by a very large majority. Negotiations are now proceeding with the Canton authorities for the construction of the building which should be completed in 1959 or 1960.

The building will consist of a main part, containing offices and an annex containing the library and a conference room large enough for the sessions of the Executive Committee. The total useful space will be approximately 2 360 square metres. The building may be either rented from the canton or purchased by the Organization.

The photographic archives of the WMO Secretariat now contain a series of photographs illustrating the activities of the Organization in various parts of the world as well as different aspects of meteorology and its applications. A selection of these photographs has appeared in past issues of the WMO Bulletin.

Carl Gustaf Rossby died suddenly, aged 59, in Stockholm on 19 August. Rossby was an outstanding scientist in meteorology and oceanography and pioneered research in many branches of these sciences.

Together with E. Palmén, Rossby proved the existence of the jet steam and his work on the conservation of absolute vorticity became the basis for modern numerical forecasting methods.

Alf Nyberg recalled that Rossby had studied under Vilhelm Bjerknes in Bergen. He went on to work at the Massachusetts Institute of Technology where he established a meteorological department, which he directed until 1939. After two years with the United States Weather Bureau he became professor at the University of Chicago in 1941. After 6 years there he was called back to Sweden as professor at the University of Stockholm and scientific adviser at the Swedish Meteorological and Hydrological Institute.

Rossby created the International Meteorological Institute in Stockholm with support from UNESCO.

Albania became a Member State of WMO on 28 August 1957. There were now 75 Member States and 22 Territories.