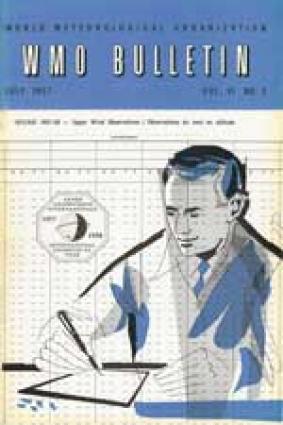 A WMO Secretariat inquiry in 1956 revealed that 15 countries had adopted the Celsius temperature scale for coding their reports for international exchange and 13 had adopted metric units.

More recently, Japan had announced that the metric system was in use for all meteorological reports and India that it was being used only for international reports but also in daily observational practice. This change-over was part of a plan to introduce metric measurements into all spheres of life in India and had been made earlier than anticipated in order to simplify the task of collating meteorological observations made during the International Geophysical Year.

These changes, together with the decision that Celsius degrees and metric units would be used for all meteorological reports made in Antarctica during the IGY, gave welcome proof of the accelerating trend towards uniformity in meteorological practice throughout the world.

The programme for 1957 exceeded US$300 000 with projects involving expert missions to 20 countries, the award of 16 fellowships and one regional project. As many meteorological problems were essentially regional in character, regional projects were thus a particularly appropriate form in which technical assistance could be rendered.

In some countries, where no Meteorological Service existed, WMO encouraged the governments concerned to apply for an expert mission to assist in the establishment of the basic essentials of a Meteorological Service, including, in particular, a network of meteorological stations, properly equipped with instruments and manned by trained personnel.

Experience had shown that, through this medium, WMO could do much to ensure the useful application of meteorological knowledge and techniques in many fields of national development and so to help in the fulfilment of many of the purposes laid down in its Convention.

Much publicity had been given to this project but little had been said about the work which would be carried out at meteorological stations all over the world. The meteorological observations would be much greater in number than the observations made in any other branch of geophysics during the IGY and would probably exceed the total of all the other disciplines put together.

In what ways would the National Meteorological Services be contributing to the IGY programme? They would be carrying out expanded programmes of observation: more than 300 additional upper-air ascents would be made each day during the IGY over the world. Several new stations would be established in isolated places, 22 in Antarctica alone. Many Services were also branching out into new types of observations, such as ozone and radiation. What optimist would have guessed that WMO would be able to publish a list of over 700 radiation stations for the IGY?

The possibility of making radiosonde observations from merchant ships had been studied for a number of years as a means of supplementing the observing programme of ocean station vessels and as a possible method of securing additional upper-air data over the oceans at minimum cost.

The vessels carried two Weather Bureau observers, who took two radio-sonde observations and four surface synoptic observations daily. The lightweight radiosondes were carried on 300-g balloons to an average altitude of about 16 000 m. Radiosondes were not released when the vessels were in territorial waters outside the United States and parachutes were used when a release is made within 100 miles of land. All observations were transmitted in WMO codes to the international data exchanges. It had not been found possible to devise a satisfactory, low-cost electronic method that could be employed on these ships for obtaining the winds aloft.

It had been decided to increase the speed of the entire the teletype network from 60 to 75 words per minute.

On the day of the change-over, 30 March 1957, a servicing engineer was present at each of the 300 stations extending across Canada from Newfoundland to British Columbia. The change-over involved more than 1 000 pieces of equipment and 30000 miles of teletype circuit.

An even more significant advance in operating speeds was carried out on 23 April 1957 when the speed of the Canadian Weatherfax system was increased from 60 to 120 revolutions per minute.

The majority of stations enjoyed good reception. Charts examined at Vancouver, 3 000 miles from the transmitting station at Montreal, revealed little or not ghosting and the loss of definition was minute. There was good reason to think that the new speed of 12 rpm would become the permanent operating speed.

The fact was often overlooked that “we are constantly and permanently subjected to the influence of either cosmic radiation or natural radioactivity and that the effects of these two phenomena are in no way harmful to our health”.

The success of work at the aerological station of the Swiss Meteorological Institute at Payerne led to hope for the establishment of a network of similar stations covering the entire world. The application of these measurements on a worldwide scale and at regular intervals and using the same observational procedures would produce reliable scientific and statistical results which would be of undoubted value for synoptic meteorology in the proper sense of the term—it would provide information which would be extremely valuable in weather forecasting.