The Global Atmosphere Watch: a History of Contributing to Climate Monitoring 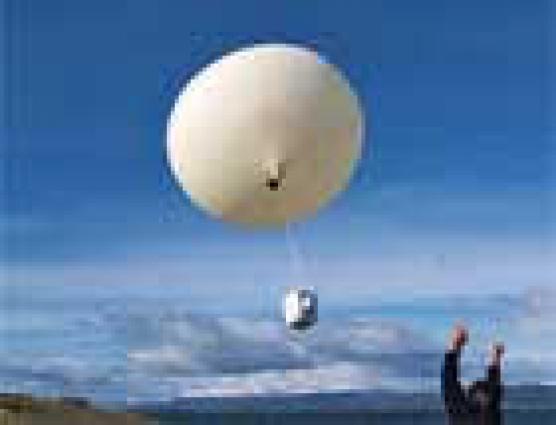 The Global Atmosphere Watch: a History of Contributing to Climate Monitoring

Monitoring of trace atmospheric constituents was originally driven by scientific curiosity. It was not long, however, before questions were raised over the connection between observed increases in certain trace chemicals and human activities, and what the consequences would be for humanity if it should continue unabated. Over the past 60 years, WMO has provided a substantial contribution in converting scientifically driven events into regular monitoring.

WMO formally embarked on a programme of atmospheric chemistry and meteorological aspects of air pollution during the 1950s. Collecting adequate information on the chemical composition of the atmosphere and on the consequences of the anthropogenic impact on a global scale is possible only if all the relevant measurements are expressed in the same units or on the same scale; the measurements performed by different countries and at different sites must be comparable.

The first step towards international coordination of chemical measurements was made by WMO during the 1957 International Geophysical Year. WMO took a responsibility for development of Standard Operating Procedures for uniform ozone observations and established the Global Ozone Observing System (GO3OS). It developed a coordinated Dobson and later Brewer spectrophotometer network to measure total atmospheric ozone. The system also includes ozonesonde observations and intercomparisons, preparation of the WMO Antarctic Ozone Bulletins, the quadrennial WMO/UNEP Scientific Assessment of Ozone Depletion and support of the WMO World Ozone and UV Data Centre in Canada.

In the late 1960s, the Background Air Pollution Monitoring Network (BAPMoN) was established. It focused on precipitation chemistry, aerosol and carbon dioxide measurements, included regional and background stations, and had a WMO World Data Centre established in the United States of America.

During the 1970s, three important atmospheric issues were addressed: (1) the threat of chlorofluorocarbons (CFCs) to the ozone layer; (2) acidification of lakes and forests in large parts of North America and Europe, caused principally by the conversion of sulphur dioxide into sulphuric acid in the atmosphere and; (3) potential global warming caused by the build-up of greenhouse gases in the atmosphere. Each of these issues is now the subject of international treaties or conventions. The initial development of these agreements and the subsequent assessments of the mitigation measures they contain relied heavily on information derived from the WMO atmospheric composition monitoring programme.

In 1989, the two observing networks BAPMoN and GO3OS were consolidated into the current WMO Global Atmosphere Watch (GAW) programme.

The GAW programme provides data for scientific assessments and for early warnings of changes in the chemical composition and related physical characteristics of the atmosphere that may have adverse effects on the environment. Monitoring has focused on green­house gases and aerosols for possible climate change, ozone and ultraviolet radiation for both climate and biological concerns, and certain reactive gases and the chemistry of precipitation for a multitude of roles in pollution chemistry.

As highlighted by the Intergovern­mental Panel on Climate Change (IPCC) Fourth Assessment Report, observations have confirmed that warming of the climate system is unequivocal. The global observations must be sustained into the future to monitor the effectiveness of policies implemented to mitigate climate change.

The WMO/GAW office and leaders of its Scientific Advisory Groups have been actively involved in supporting the United Nations Framework Convention on Climate Change (UNFCCC) through contributions to the Strategic Implementation Plan of the Second Report on the Adequacy of the Global Observing Systems for Climate by the Global Climate Observing Strategy. The document officially recognizes essential climate variables (ECVs) that need to be systematically measured globally in order to address major issues. In the area of atmospheric composition these variables are carbon dioxide, methane and other long-lived greenhouse gases, ozone and aerosols, supported by their precursors (nitrous oxide, sulphur dioxide, formaldehyde and carbon monoxide, in particular).

Most of the ECVs connected with atmospheric chemical composition are observed in the framework of the GAW programme. Every variable requires a robust supporting infrastructure to establish a global observing system, including the following components:

Together, these components help to ensure the global measurement of important atmospheric constituents that affect the climate.

Projections of a changing climate have added a new dimension to the issue of the stratospheric ozone layer and its recovery. New data and models show the interconnections between these two global environmental concerns. Projected cooling in the stratosphere (upper atmosphere, between about 10 and 50 kilometres high) will slow down ozone recovery in the polar regions. On the other hand, ozone-depleting chemicals and ozone itself provide a positive forcing of the climate. Therefore, the reduction of ozone-depleting substances not only helped the ozone layer but also lessened climate forcing.

Routine measurements of column ozone from ground-based UV spectrophotometers are performed under the guidance of the WMO GAW programme. Weather balloons carry instruments from the surface of the Earth to 30 to 35 kilometres altitude to measure the vertical distribution of ozone (Figure 2). Currently, the WMO/GAW Global Ozone Monitoring Network consists of 132 stations measuring total ozone with a combination of Dobson and Brewer spectrophotometers and 63 stations measuring profile ozone with ozonesondes. The ozonesonde sites are run by WMO/GAW, NASA/Southern Hemisphere Additional Ozone Sondes and the Network for the Detection of Atmospheric Composition Change.

The Spanish Meteorological Institute hosts the Regional Brewer Calibration Centre for Europe (RBCC-E), officially nominated by WMO in November 2003. It consists of a triad of Brewer spectrophotometers. Together with the Brewer triad maintained at Environment Canada (Toronto), this constitutes an international Brewer calibration system with quality assurance procedures similar to those of the Dobson network. In addition to serving the 50 Brewer spectrophotometers in Europe, RBCC-E also takes care of stations in North Africa (Casablanca and Cairo). The first two GAW regional Brewer intercomparisons for Europe were arranged by RBCC-E in Spain in September 2005 and 2007, and the most recent campaigns took place in September 2009.

A recent comparison between satellite column ozone data and ground-based measurements indicated a need to recalculate some long-term total ozone series. In order to provide support to homogenize such series, a data re-evaluation workshop for the station data managers was recommended by the Seventh Meeting of the Ozone Research Managers of the Parties to the Vienna Convention and is scheduled for 2010.

Understanding the global budget of the greenhouse gases in the atmosphere and predicting its evolution under future climate scenarios is one of the biggest challenges facing science today. One of the challenges is to distinguish between natural and anthropogenic sources, which requires accurate global measurements. Resolving the uncertainty in the natural sinks of the carbon cycle is also essential for climate predictions due to the feedbacks between climate change and the carbon reservoirs.

As reported in the November 2009 Greenhouse Gas Bulletin, published by WMO/GAW, the globally averaged mixing ratios of carbon dioxide, methane and nitrous oxide reached new highs in 2008 with carbon dioxide at 385.2 ppm (the number of molecules of the gas per million molecules of dry air), methane at 1797 ppb (parts per billion) and nitrous oxide at 321.8 ppb (Figure 3). These numbers were higher than those in pre-industrial times (before 1750) by 38 per cent, 157 per cent and 19 per cent, respectively. These data were obtained on the basis of the greenhouse gas observations in the GAW programme.

A rolling review process of the data quality objectives is performed through the biennial meetings of experts co-sponsored by WMO and IAEA. The first meeting of this expert group was held in 1975 at Scripps Institution of Oceanography and was co-sponsored by WMO. It was a milestone in leadership of global greenhouse gas monitoring by NOAA.

In October 2005, the steering committee of the Global Climate Observing System (GCOS), which is co-sponsored by WMO, approved the GCOS-GAW Agreement establishing the “WMO-GAW Global Atmospheric CO2 & CH4 Monitoring Network” as a comprehensive network of GCOS; ozone is a GCOS variable as well.

The GAW global network for surface based carbon dioxide observations includes 180 stations (Figure 4). Obtaining global distributions and trends of a particular variable with sufficient resolution to provide quantitative estimates of regional sources and sinks of greenhouse gases requires not only surface-based stations but also aircraft and satellite observations.

Other in situ measurements will provide the observational resources to undertake regional analyses. Measure­ments of the isotopic composition of carbon dioxide and methane can help to distinguish between various emission sources and thus improve our understanding of the budgets of these gases. These measurements are already carried out by a number of observatories in the GAW network. Moreover, development of new and more accurate measurement techniques, such as cavity ring-down laser spectroscopy, needs consideration of the carbon dioxide and methane isotopic composition in the process of calibration.

Several projects and networks contribute to provide a three-dimensional picture of the greenhouse gases distribution. In particular, Japanese scientists are using Japan Airlines, and European researchers are working within the framework of the CARIBIC project.

The need for satellite data validation and data across the globe led to the development of the Total Carbon Column Observing Network (TCCON) of upward looking Fourier Transform Spectrometers. TCCON measurements, once calibrated, can help validate satellite measurements from the SCIAMACHY instrument and those on the GOSAT and the future OCO2 satellites. TCCON, which collaborates closely with NDACC, was established in 2004 and became a GAW contributing network in 2009.

In addition to the main greenhouse gases, several other potent greenhouse gases are emitted in the atmosphere through human activity. Halocarbons are currently one of the contributors to the global radiative forcing playing a role comparable to that of nitrous oxide. Some halocarbons (CFCs and most halons) are decreasing slowly as a result of emission reductions under the Montreal Protocol on Substances that Deplete the Ozone Layer, whereas others (HCFCs and HFCs) are increasing rapidly.

A number of networks contribute to the aerosol measurements in the GAW programme. They are the Aerosols Robotic System, the GAW Aerosol Lidar Observations Network and the Background Solar Radiation Network sites. Several regional networks of measurements directly related to aerosol properties are in place for addressing air quality and acidification issues, as well as for supporting satellite calibration and validation.

The establishment of a WCC for the long list of aerosol parameters is an important task in ensuring high quality of the data. It was therefore decided to distribute this task between two different institutions. The Institute for Tropospheric Research in Leipzig has agreed to host the WCC for the physical parameters. A host for the WCC for the chemical parameters still must be located.

Supporting measurement of precursors for aerosols and ozone

Global observations of the precursors are also performed within the GAW programme (in the group of reactive gases). Some of the networks are quite mature and have all necessary elements (for example for carbon monoxide), while others are in the stage of establishment. In 2006, a network was established for volatile organic compounds, which serve as precursors for tropospheric ozone. A GAW workshop took place in October 2009 at Hohenpeissenberg to establish a network for global observations of various nitrogen oxides.

WMO has a long history of working on atmospheric issues that has continued through the GAW programme. The programme is evolving, filling the gaps in the measurement parameters, building new central facilities and increasing the number of observations. This progress is due to the dedication and contributions of many scientists all over the world, some of whom are no longer with us, but from whose efforts we all continue to benefit.

The authors wish to express their thanks to Oksana Tarasova and Geir Braathen, both with the WMO Secretariat, for their contributions and work on this article. For more information, visit: http://public.wmo.int/en/programmes/global-atmosphere-watch-programme