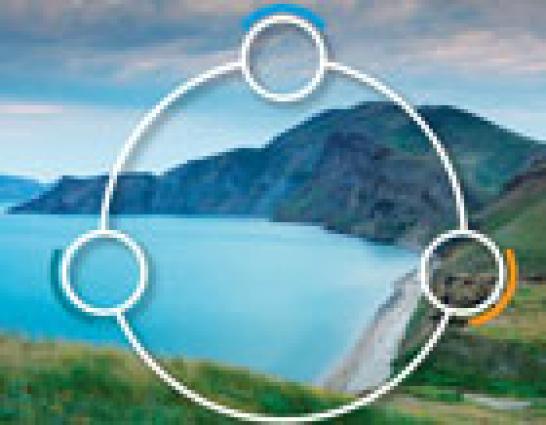 by David Goodrich1 and William Westermeyer2

April 2012 marked the 20th anniversary of the Global Climate Observing System (GCOS) Programme, which ensures provision of the observational data and information that is the foundation for decisions on climate. The Global Climate Observing System is built on existing operational and scientific observing, data management and information distribution systems. It is based on the climate-relevant components of the WMO Global Observing System, the Global Ocean Observing System, the Global Terrestrial Observing System, and on various programmes monitoring additional key components of the climate system, such as atmospheric constituents. GCOS is sponsored by WMO, the Intergovernmental Oceanographic Commission (IOC) of United Nations Educational, Scientific and Cultural Organization (UNESCO), the United Nations Environmental Programme (UNEP), and the International Council for Science (ICSU). It formally came into being at the first meeting of the GCOS Joint Scientific and Technical Committee in Geneva in April 1992.

In the 1980s and early 1990s, several global research initiatives were set up to help scientists better understand and predict various climate phenomena. But these scientists soon become aware of major problems embedded in the long-term observational record of climate – a record that would be vital to understanding and addressing climate change. The First Assessment Report of the Intergovernmental Panel on Climate Change (IPCC), published in 1990, touched on the issue. In addition to its findings on the state of the climate system, the IPCC Report made the following statement on the observing system:

Systematic long-term observations of the system are of vital importance for understanding the natural variability of the Earth’s climate system, detecting whether man’s activities are changing it, parameterising key processes for models and verifying model simulations. Increased accuracy and coverage in many observations are required. Associated with expanded observations is the need to develop appropriate comprehensive global information bases for the rapid and efficient dissemination and utilization of data.

In addition, the Second World Climate Conference (WCC-2) in 1990 issued an invitation to the World Meteorological Congress to strengthen monitoring and research within the World Climate Programme (WCP). Following this invitation, an expert meeting, hosted by the UK Meteorological Office in January 1991, elaborated the concept and sponsorship arrangements for a Global Climate Observing System. By early 1992, a Memorandum of Understanding to establish the Global Climate Observing System was in place among the proposed sponsors. A Joint Planning Office (later renamed the GCOS Secretariat) was established at WMO Headquarters in Geneva, a Joint Scientific and Technical Committee (which eventually became the GCOS Steering Committee) was appointed, and, by mid-1995, a comprehensive GCOS Plan had been finalized.

The Global Climate Observing System supports all aspects of the World Climate Programme, the climate change assessment role of the IPCC, and the international climate policy role of the United Nations Framework Convention on Climate Change (UNFCCC). In particular, it was conceived to provide sustained, comprehensive, climate and climate-related observations to:

Thus, the GCOS Programme aims to provide comprehensive information on the total climate system, involving a multi-disciplinary range of physical, chemical and biological variables across the atmospheric, oceanic and terrestrial domains, including hydrological and carbon cycles and the cryosphere. It is intended to meet the full range of national and international requirements for climate and climate-related observations on all scales – global, regional and national.

The GCOS Programme will formally celebrate the 20th anniversary of the Global Climate Observing System on Friday, 29 June 2012 during the 64th WMO Executive Council meeting in Geneva. The celebration will provide an opportunity to review the origins of the Global Climate Observing System, to take stock of the accomplishments of the GCOS Programme in the first twenty years of its existence, and to plan ahead for new opportunities and challenges.

While there remain many gaps and deficiencies in climate-observing networks, there have been some notable accomplishments in the first two decades of the Global Climate Observing System. In the atmospheric domain the GCOS Surface Network (GSN) and GCOS Upper Air Network (GUAN) were created from the larger World Weather Watch network. GSN and GUAN consist of high-quality, long-duration stations especially appropriate for climate purposes. To assist in upgrading and/or renovating the stations in these networks, the GCOS Secretariat created the GCOS Cooperation Mechanism in 2001. This is a mechanism by which developed countries can make contributions toward the resolution of problems at priority climate stations in developing countries. As a result, the dedicated GCOS System Improvement Programme has renovated over 30 GSN and 20 GUAN stations and provided over 25 station-years of radiosondes to date. Another notable accomplishment in this domain has been the launch of a reference network for upper-air observations, the GCOS Reference Upper Air Network (GRUAN). This network is a hybrid observing system, combining operational upper-air measurements sites with research sites and providing high-quality reference data for atmospheric profiles.

A significant example of progress in the ocean domain is the creation of the global Argo float network. The Argo Programme reached its goal of 3 000 floats in 2007 and currently has over 3 500 floats in the water, providing one of the key data sets for monitoring ocean temperature and salinity. With Argo in mind, the global expendable bathythermograph (XBT) network was redesigned to consist of frequently repeated and high density lines. In addition to the broad coverage provided by these networks, a worldwide system of reference stations, known as OceanSITES, has been deployed, providing full-depth coverage at 60 sites for dozens of variables. Overall, the number of in situ oceanographic reports has gone from roughly 4.5 million in 1999 to more than 16 million in 2009. Taken as a whole, these platforms provide a rich and complementary perspective on the global ocean.

There has also been progress in terrestrial networks for climate since the Global Climate Observing System was founded, although progress has not been as rapid as in other domains. Examples include the increased commitment of space agencies to produce fundamental climate data records from existing systems, which has led to improved availability of global datasets, such as of burned area, fraction of absorbed photosynthetically active radiation, and land cover; the improved overall performance of in situ glacier monitoring networks; and the increasing collection of permafrost data as a result of a focus on this data during the 2008-2009 International Polar Year.

Aside from facilitating improvements in specific networks, the GCOS Programme has been active in a number of other ways that have facilitated improvements in the long-term climate record. An important example is the formulation of the GCOS Climate Monitoring Principles. Today, these principles provide the framework for the design and operation of climate networks globally, both satellite and in situ. The GCOS Programme has also established important links with the UNFCCC, becoming the respected voice of the climate-observing community in this forum. It reports regularly to the UNFCCC’s Subsidiary Body on Scientific and Technological Advice and is frequently asked by the Conference of the Parties to the UNFCCC to assess the status of climate observing networks and to report on progress in implementing needed improvements. Thus, the GCOS Programme, drawing on its large network of experts, produced the Report on the Adequacy of the Global Climate Observing Systems in 1998, which it updated in 2003. It was then asked by the UNFCCC to prepare an implementation plan addressing the needs identified in the “Adequacy Report.” The Implementation Plan for the Global Observing System for Climate in Support of the UNFCCC was first prepared in 2004 then updated in 2010, following the release of a progress report in 2009. The UNFCCC has found these documents very useful, and the GCOS Programme plans to update them at regular intervals every five or six years.

In addition, in 1999 the UNFCCC asked the GCOS Programme to organize a Regional Workshop Programme to identify priority observing system needs in developing countries. Conducted between 2000 and 2006, this Programme led to the preparation of Regional Action Plans in ten regions of the world. However, implementation of the project proposals has proved more difficult than preparation of the Plans. While some have been implemented, many remain to be carried out. In an attempt to assist African regions in identifying funding for implementation, the GCOS Secretariat helped organize a meeting in Ethiopia in 2006 that led to the establishment of the Climate for Development in Africa Programme. This important programme is now poised to assist funding of African observing system needs. The GCOS Programme will continue to work with other regions to help them mobilize resources for addressing priority needs.

Finally, the GCOS Programme can take satisfaction in its promotion of the development of satellite observing systems for climate. There has been direct and intense interaction between the GCOS Programme and the satellite community over the 20-year history of the Global Climate Observing System. One of the highlights of this interaction has been the development of a strong working relationship between the GCOS Programme and the Committee on Earth Observing Satellites, the primary international forum for coordination of space-based Earth observations. In 2006, for example, space agencies, through the Committee on Earth Observing Satellites, responded to the GCOS climate requirements across the atmospheric, oceanic, and terrestrial domains identifying 58 separate actions to be undertaken. In addition, the Committee on Earth Observing Satellites requested a more detailed analysis of satellite climate observing needs. This was provided in 2006 as the so-called Satellite Supplement to the GCOS Implementation Plan and again in 2011, following the release of the updated Implementation Plan.

Despite these key accomplishments in the last 20 years, there are still a significant number of needs to be met. This is especially the case in developing countries, where some networks have been deteriorating, rather than improving, despite the efforts of the GCOS Programme and others.

The GCOS Programme has been an active participant in preparing the Implementation Plan for the Global Framework for Climate Services. With the WMO Observing and Information Systems Department and with other UN agencies and interested parties, it is assisting in the preparation of the Observations and Monitoring Annex to the Plan. It is anticipated that the Global Framework for Climate Services Implementation Plan and its Annexes will be approved at the Extraordinary Session of the WMO Congress in October 2012.

In addition to a new need for climate observations to support the development and use of climate services, there is a related need for climate observations for climate risk management and adaptation to climate change. A prerequisite for effective climate risk management and adaptation is the availability of reliable information about how regional climate is likely to vary in the future on seasonal and interannual time scales or change on decadal and longer time scales. In the near future, the GCOS Programme plans to organize a major workshop to better understand observing system requirements to support the design of effective adaptation measures. In the longer term, it will work to ensure that those requirements are met.

To summarize, much has been accomplished by the GCOS Programme in the last 20 years in support of the Global Climate Observing System. However, the challenge of creating and sustaining a fully functioning climate observing system that can meet the need for observations of the climate for science, policy, services, and assessment continues.

GCOS, April 2003, Second Report on the Adequacy of the Global Observing Systems for Climate in Support of the UNFCCC (GCOS-82), Geneva.

GCOS, October 2004, Implementation Plan for the Global Observing System for Climate in Support of the UNFCCC (GCOS-92), Geneva.

GCOS, August 2009, Progress Report on the Implementation of the Global Observing System for Climate in support of the UNFCCC 2004-2008 (GCOS-129), Geneva.

GCOS, August 2010, Implementation Plan for the Global Observing System for Climate in Support of the UNFCCC (2010 Update) (GCOS-138), Geneva.