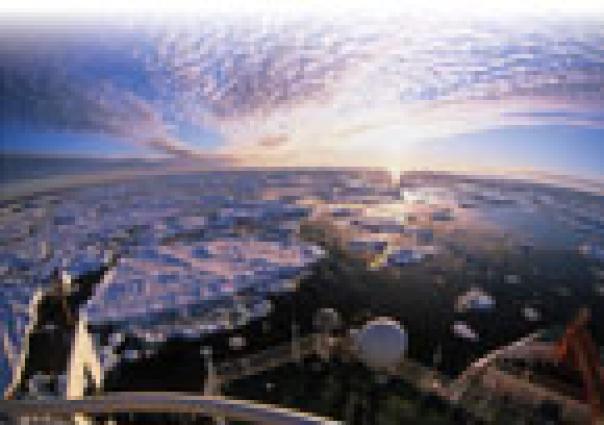 The International Polar Year (IPY) 2007-2008 was successfully launched by WMO and the International Council for Science on 1 March 2007. The fundamental concept of IPY is an intensive burst of internationally coordinated, interdisciplinary, scientific research and observations focused on the polar regions. IPY provides the opportunity to obtain long-term series of observational data on the state of the atmosphere, ocean, cryosphere and other components of the climate system in polar regions. It will extend our knowledge of the variability of the processes in the polar environment and facilitate the development of sophisticated techniques for weather forecasting, operational oceanography and climate prediction and, therefore, offers an opportunity for the further improvement of hydrometeorological services worldwide in support of socio-economic development.

To intensify international attention on IPY and emphasize the role of polar regions in the global climate system, World Meteorological Day in 2007 was dedicated to the topic “Polar meteorology: understanding global impacts”. Three prominent persons were invited to give lectures. Arthur Chilingarov, eminent Russian polar scientist, described IPY as a unique platform for international cooperation. Chris Rapley, President of the Scientific Committee for Antarctic Research, gave a presentation “Shrinking ice: the global impact of polar warming”. Explorer Mike Horn, who, in 2006, with Borge Ousland, was the first to walk to the North Pole in the sunless Arctic winter gave a presentation entitled “On site—visual impact: acting for the future”. These lecturers ensured that World Meteorological Day 2007 was an interesting and significant element in promoting IPY.

This issue of the WMO Bulletin is a significant input to the education and outreach aspects of IPY. The range of scientific topics and specialities coverd by IPY is enormous. The IPY projects address challenging issues driven by the need to understand recent and rapid changes in the polar regions. Four key issues stand out as requiring urgent attention: shrinking snow and ice; interactions of the poles and the rest of the planet; individual well-being and polar community resilience in the face of extraordinary environmental and social change; and attaining new scientific frontiers. WMO, through the National Meteorological and Hydrological Services (NMHSs), will be offering substantial contributions to the IPY in the areas of polar meteorology, oceanography, glaciology and hydrology in terms of scientific research and observations.

Although the polar regions are generally distant from population centres, there is great need for reliable weather forecasts in these areas. In the Arctic, forecasts are needed for the protection of indigenous communities, as well as in support of maritime operations, tourism and oil and gas exploration. In the Antarctic, reliable forecasts are required for logistical operations in the air and at sea in support of scientific research and the tourism industry. Weather forecasting in both polar regions presents unique challenges. The development of new weather and environmental prediction systems through WMO’s World Weather Research Programme-THORPEX IPY projects will be a step forward in the generation of hydrometeorological information needed to monitor and forecast the state of the polar environment on a wide range of scales, from a few hours to weeks. These improvements will, in turn, generate socio-economic benefits for polar communities.

IPY provides the opportunity to organize an international study of the chemical composition of the polar atmosphere in both hemispheres. Of importance are the exchange mechanisms and drivers of exchange of chemical trace species between the atmosphere, land surfaces, the oceans and snow and ice surfaces, which depend on the physical, chemical and biological state of the Earth system components. Attention is required concerning the coupling mechanisms between climate, ozone depletion in the stratosphere and the boundary layer and the environmental changes linked to the long-range transport of pollutants. There is a need to understand the system well enough that the effects of future changes in climate and the relative proportions of snow, land and ocean surfaces of the atmosphere—with associated feedbacks—can be quantified.

One key element of IPY atmospheric research are studies addressing stratospheric polar ozone depletion—one of the strongest anthropogenic signals in the global climate system. Much research activity in the polar stratosphere during IPY is based on the Match method, which was developed to measure precisely the rate of loss of ozone in the polar stratosphere. Multi-annual data from the Match campaigns allowed the sensitivity of Arctic ozone loss on changes in climate—a key parameter for future projections of polar ozone loss—to be established.

In recent decades, some significant changes were detected in the polar environment, such as a decrease in perennial sea ice, a reduction in the amount of snow cover, the melting of glaciers and permafrost and a decrease in river and lake ice. The timing of IPY for observing and increasing our knowledge about the rapid change in the polar cryosphere could not have been more appropriate. Satellite data are critical for the derivation of new high-latitude cryosphere products, as in situ data are sparse or non-existent in these remote regions. A project entitled the Global Interagency IPY Polar Snapshot aims to obtain high-resolution, broad spectral snapshots of the polar regions. In addition, a system of satellites on a highly elliptical orbit—called Arctica—is planned by the Russian Federation in four years’ time to observe wind speed and direction, clouds, ice cover and other parameters in the Arctic.

International, long-term, multi-disciplinary observing networks should be a particularly significant legacy of IPY 2007-2008. The establishment of a Global Cryosphere Watch would be an important part of this. These observing systems would provide scientists and decision-makers with real-time information on the evolving state of the polar environment for decades to come.

Lastly, statistical seasonal tropical cyclone forecasting has come a long way since the early 1980s. As well as predictions of total seasonal activity, several forecasts now include individual monthly forecasts and predictions of probability of landfall. As the availability of global datasets such as the various re-analysis products continues to be improved, so will statistical forecasts of tropical cyclones.