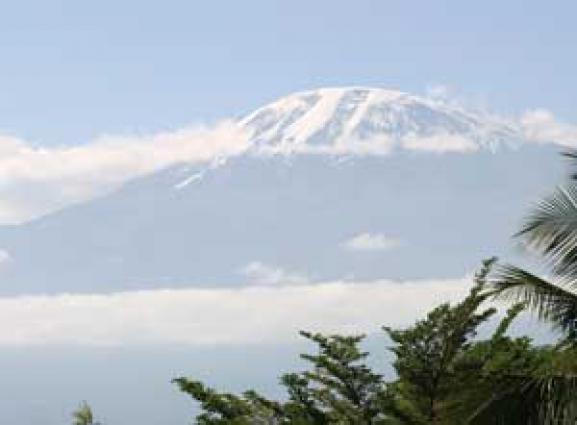 The IPCC Fourth Assessment on Climate Change 2007: Impacts, Adaptation and Vulnerability (IPCC, 2007(a)) addressed three main issues: impacts of climate change which are observable now; future effects of climate change on different sectors and regions; and responses to such effects. The assessment included 12 key messages, which are summarized here.

A new development in the IPCC Fourth Assessment was the introduction of a chapter dedicated to observed and measurable impacts. The author team of this chapter examined more than 29 000 environmental data series and found that 89 per cent of these exhibited trends consistent with warming. Most of the available data are terrestrial, rather than oceanic, and are concentrated in Europe and North America, leading to dif­ficulties in drawing a global pic­ture. Nevertheless, the conclusion is that natural systems around the world are being affected by regional climate changes, particularly temperature increases, and that these temperature increases are very likely to be the result of anthropogenic emissions of greenhouse gases.

Most evident are reductions in snow, ice and frozen ground, which, in turn, are leading to enlargement and increased numbers of glacial lakes, and increased ground instability in permafrost and mountain regions. Although the greatest redu­ction in ice extent has occurred in the Arctic, some of the most obvious has been in tropical mountain environments such as on Mt Kilimanjaro (Figure 1).

There is extensive evidence that recent warming is strongly affecting terrestrial biological systems, including such changes as earlier timing of spring events (e.g. leaf unfolding, bird migration and egg laying; and shifts in ranges of plant and animal species). In the oceans, and mainly at high latitudes, we can currently observe shifts in ranges and abundance of algae, plankton and fish.

Probably the most important effect of greenhouse gas emissions is in the oceans, which have become increasingly acidic as carbon dioxide is absorbed by water to become carbonic acid. So far, we have recorded an average pH reduction of 0.1. Increasing acidity is expected to have major effects on shell-forming organisms, but research on this is in its infancy.

Other effects of regional climate changes on natural and human environments are emerging, although many are difficult to discern due to adaptation and non-climatic trends such as land-use change. These include earlier spring planting of crops, increase in forest fires in northern high latitudes and warmer and drier conditions in the Sahel, leading to a reduced length of growing season.

2. Key impacts and the most vulnerable places can now be identified

Since the IPCC Third Assess­ment (2001), many additional studies, particularly in regions that previously had been little researched, have enabled a more systematic understanding of how the timing and magnitude of impacts are likely to be affected by changes in climate and sea level associated with differing amounts and rates of change in global average temperature. The main conclusions regarding these impacts are summarized in Figures 2 and 3. From this assessment, the IPCC author team identified those systems, sectors and regions most likely to be especially affected by climate change.

The most vulnerable systems and sectors are:

The most vulnerable regions are:

Within other areas, even those with high incomes, some people can be particularly at risk (such as the poor, young children and the elderly) and also some areas and some activities.

Many of the regional differences in impact will stem from changes in water availability (which is essential for human health and food production). Over the past five years, we have developed a clearer picture of how water availability may change regionally, with indications of important decreases in southern Europe and in northern and southern Africa. If these projected changes should occur, then impacts in these regions could be severe (Figure 4).

3. There are very likely to be impacts due to altered frequencies and intensities of extreme weather, climate and sea-level events

The IPCC Fourth Assessment Report con­cluded, with increased confidence over the Third Assessment, that some weather events, such as heat waves, storms and droughts, that can have large impacts, are likely to become more frequent and widespread in the future and, in some cases, more intense. In general, the related impacts are expected to be broadly negative, including reduced water availability, damage to crops and increased potential for diseases, especially those transmitted by insect vectors. For example, it is a conclusion of the Fourth Assessment that intense tropical cyclone activity is likely to increase through the 21st century. Thus, it is reasonable to expect events such as Hurricane Katrina, which hit New Orleans in August 2005 and caused an estimated 4 000 fatalities, to occur more often in the future (Figure 5).

4. Some large-scale climate events have the potential to cause very large impacts, especially after the 21st century

The IPCC Working Group I Fourth Assessment Report concluded that complete melting of the Greenland ice sheet, associated with a 1.9°C to 4.6°C global average temperature increase relative to pre-industrial levels, could lead to sea-level rises, over millennia, of 7 m. For the West Antarctic ice sheet, complete melting would contribute 5 m to sea-level rise. If this occurred, there would be widespread inundation of low-lying areas. Working Group II concluded that an abrupt change in the Meridional Overturning Circulation in the North Atlantic (i.e. weakening of the Gulf Stream), which could lead to cooling in north-western Europe would be very unlikely to occur during this century.

5. The overall effect of climate change will be negative

The IPCC Fourth Assessment Report makes it clear that the impacts of future climate change will be mixed across regions, but negative overall. Some low-latitude and polar regions will experience net costs, even for small increases in temperature. Other regions might experience some benefits for increases in temperature up to 2°C or 3°C before negative effects become more general. An example of this is possible increases in wheat yield for a temperature increase of 1°C-3°C at middle and high-latitudes but decreases in yield above 3°C (Figure 6).

These regions are the current “breadbaskets” of the world, so the effects here would be keenly felt on food prices elsewhere; and, since agricultural production is a major part of global production, this explains why there is a wide band of uncertainty about the aggregate effects of climate change (with global losses between 1 and 5 per cent of gross domestic product expected for a 4°C warming—a conclusion which reinforces that of the Third IPCC Assessment). It is virtually certain, however, that such aggregate estimates of costs mask significant differences in impacts across sectors, regions, countries and populations. In some locations and among some groups of people with high exposure, high sensitivity and/or low adaptive capacity, net costs will be significantly larger than the global aggregate.

6. Adaptation will be necessary to address impacts resulting from the warming which is already unavoidable, due to past emissions

Working Group I concluded that, even if emissions were stabilized now, global temperatures would increase on average by a further 0.6°C by 2100. Furthermore, some current targets to reduce emissions assume a global average temperature increase of about 1.5°C above present (i.e. 2°C above pre-industrial temperatures). A significant amount of potential impact will therefore need to be adapted to, regardless of how effective are our efforts at mitigation.

7. Some adaptation is occurring now, but on a limited basis, and more is needed to reduce vulnerability to climate change

There is growing evidence of human ability to adapt to observed and anticipated climate change. For example, climate change has been included in the design of infrastructure projects such as coastal defences in the Maldives and the Netherlands. Other examples include prevention of glacial lake outburst flooding in Nepal, policies of water management in Australia, and government responses to heat waves in some European countries.

Much more adaptation is needed, however. The array of potential adaptive responses avail­able is very large, ranging from purely technological (e.g. sea defences), through behavioural (e.g. altered food and recreational choices), to managerial (e.g. altered farm practices) and to policy (e.g. plan­ning regu­lations). We do not know, however, how effective various options are at fully reducing risks, nor their cost. This is especially true for larger amounts of warming over the long term and the IPCC authors concluded that adaptive capacity cannot be expected to cope with large amounts of long-term warming. This is why (as argued below) the combination of mitigation and adaptation will be essential.

8. Vulnerability to climate change can be exacerbated by the presence of other stresses

Non-climate stresses can increase vulnerability to climate change by reducing resilience and can also reduce adaptive capacity because of resource deployment to competing needs. For example, lower-than-normal receipts of rainfall in the Sahel have contributed to the reductions in the area of Lake Chad over the past 30 years. Equally important, however, may have been increased human abstraction of water from the rivers and streams that feed the lake. It is probably the combination of climate change and other trends that explain the lake’s shrinkage (Figure 7).

9. Future vulnerability depends not only on climate change but also on development pathway

Projected impacts of climate change can vary greatly due to the choice of future economic and social development pathway. New research on potential impacts allows for dif­ferences in regional population, income and technological develop­ment under alternative scenarios. It is now clear that development can be a strong determinant of vulnerability to climate change.

To illustrate, Figure 8 shows estimates of the global number of people at risk of flooding under different assumptions of socio-economic devel­opment. This indicates that the projected number of people affected is considerably greater under the A2-type scenario of development (a future world characterized by low per capita income and large population growth) than under other futures such as A1 (a high income/high population world); B1 (sustainable development/global gov­ernance); and B2 (sustainable devel­op­ment/local governance). Thus, difference in impact between these future conditions is largely explained, not by climate change, but by differences in vulnerability due to wealth and technology. This is important, because it suggests that choice of development pathway can be a key to reducing impacts from climate change.

Sustainable development can reduce vulnerability to climate change by enhancing adaptive capacity and increasing resilience. At present, however, few plans for promoting sustainability have explicitly included either adapting to climate change impacts or promoting adaptive capacity. On the other hand, it is very likely that climate change can slow the pace of progress towards sustainable development (e.g. impede achievement of Millennium Devel­opment Goals), either directly through increased exposure to adverse impacts or indirectly through erosion of the capacity to adapt.

11. Many impacts can be avoided, reduced or delayed by mitigation

A small number of impact asses­s­ments have now been completed for scenarios in which future atmospheric concentrations of greenhouse gases are stabilized. Although these studies do not take full account of uncertainties in projected climate under stabilization, they nevertheless provide indications of damage avoided or vulnerabilities and risks reduced for different amounts of emissions reduction.

12. In conclusion: we will need a mix of adaptation and mitigation measures to meet the challenge of climate change, but this is hampered by a lack of information on the costs and benefits of adaptation

Even the most stringent mitigation efforts cannot avoid some impacts of climate change over the next few decades. Indeed, we are beginning to see these impacts now. This makes adaptation essential, particularly in addressing near-term impacts. However, unmitigated climate change would, in the long term, be likely to exceed our capacity to adapt.

It is essential, then, to develop a portfolio or mix of strategies that includes mitigation, adaptation, tech­nological development (to enhance both adaptation and mitigation) and research (on climate science, impacts, adaptation and mitigation). But analysis of the benefits of various mixes of strategy is severely restricted at present by lack of information on potential costs of impacts, by lack of comparable information on the damage that could be avoided by adaptation and, especially, by lack of understanding of how these impacts will vary under different socio-economic development pathways. It is important that these gaps in our knowledge are filled quickly.