Laying the Foundations for Climate Science 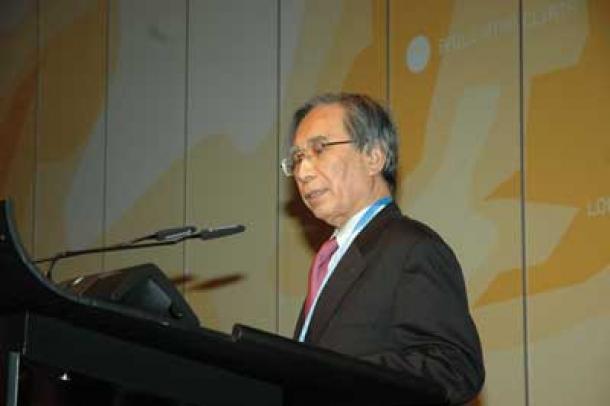 Laying the Foundations for Climate Science

An interview with Taroh Matsuno

WMO presented its most prestigious award to Professor Taroh Matsuno of Japan during the 16th World Meteorological Congress, held from 16 May to 3 June 2011. The award recognizes his contributions to the progress of studies on climate change.

Professor Matsuno has been motivated by the potential to use meteorological science to benefit humanity, first in Japan, then in developing countries. During the World Meteorological Congress, Professor Matsuno delivered a lecture on The Future of Numerical Modelling of Weather and Climate in the Tropics. Many participants, particularly from developing countries, commented on how his research had influenced them. The Intergovernmental Panel on Climate Change and the World Climate Research Programme have also recognized the impact of his contributions in their work.

Q. You’ve received the most prestigious WMO award. What does this mean for you? How do you relate your work to the everyday world?

A. Receiving this award from WMO is a great honour. WMO supports national meteorological and hydrological services, and these national bodies are very practical for society. I am in the academic sector, rather than in operational services, so this award is especially meaningful for me. My contribution to establishing climate research centres was cited as on of the reasons for my award.

I worked on theoretical studies of equatorial dynamics in the ocean early in my career. In my thesis work, I obtained the solution of the dynamics equation for the atmosphere and the ocean in the equatorial area. I found that waves of a very unique character were propagating along the equator, including the eastward propagating Kelvin wave and the westward propagating Mixed Rossby-Gravity wave. These waves were unknown in 1966, but soon after this theoretical prediction they have been discovered both in the atmosphere and the ocean.

In the 1970s when studies of the El Niño–Southern Oscillation phenomenon developed, it was recognized that these waves play decisive roles in the mechanism of the phenomenon. Kelvin waves in particular appear quite often in diagrams that analyse the atmosphere and ocean states in connection with El Niño and the Madden Julian Oscillation. Thus, I am happy to see that the equatorial wave theory is successfully applied to these real atmospheric and oceanic phenomena. For example, these studies helped organizations such as the Japan Meteorological Agency and the US Climate Prediction Center to operationalize the effects of El Niño and La Niña in the Pacific Basin.

Q. What motivated you to become a scientist?

A. My personal experience in Japan when I was young influenced my decision to become a scientist. At the time just after World War II, Japan was attacked by many typhoons year after year. This gave me the strong impression that the power of the nature is enormous, being far beyond humankind’s controls. At the same time I learned that at weather stations meteorologists make analysis of weather maps to predict the movement of typhoons. In fact, when I was a junior high student the teacher took us to the local weather station where I saw their work. Then I gradually became interested in weather prediction and meteorology and decided to study meteorology at university.

When I became a graduate student of the University of Tokyo there were many smart young people such as Kiku Miyakoda, Suki Manabe and Michio Yanai. However, most of them left Japan for the United States because conditions for researchers were tough in the 1960s. There were few academic positions, salaries and research grants were low, and there were no computers accessible to young researchers. After moving to the United States, eventually they became leading scientists. I believe they were initially motivated by our country’s vulnerability to natural disasters. Now Japan is much better prepared and we see much less damage.

Today, some people in tropical countries may have the same motivation to become scientists. I encourage them to do so.

Q. What are the greatest challenges in forecasting and research?

A. Numerical Weather Prediction (NWP) for the tropics is the single greatest challenge. NWP Prediction in the middle and high latitude regions has made great strides, and is now very accurate. Dr Adrian Simmons showed the remarkable progress of NWP in his lecture during the World Meteorological Congress.

More needs to be done for the tropical region. During the World Meteorological Congress, many delegates from the South commented on the fact that Numerical Weather Prediction could be improved.

We need powerful computers for the tropics because we need very high resolutions or grid boxes as small as five kilometres or less for treating convective clouds. My own organization is working on this, and it would be great if such high-resolution models became feasible for operational use.

Q. The WMO Secretary General said your work is critical to the Global Framework for Climate Services. Is it because of your attention to the South?

A. Yes, I believe this was a factor. More attention needs to be paid to the climate research and operations of the South. NWP in the middle to high latitudes is mature. What I emphasized in my presentation was that so far numerical modelling of the atmosphere for NWP or general circulation studies aimed at reproducing weather and circulation systems in the middle and high latitude, for which observation was plentiful, and more importantly, the theoretical basis was firmly established.

On the contrary, for the tropical atmosphere even systematic description and classification of weather and circulation systems are incomplete, despite the fact that they are quite different from those in the middle and high latitudes. Looking from the theoretical viewpoint the difference between the two are clear and well known.

In the middle and high latitudes weather changes associated with extra-tropical cyclones, anticyclones and fronts are well known as the Norwegian Cyclone model. Charney and Eady established the mechanisms for them in the late 1940s, which are known as the baroclinic instability theory. Its essence is that they are generated from the temperature gradient between the polar and tropical regions and transport heat from lower to higher latitudes.

In the tropics the temperature is rather uniform over a very large area, about half of the Earth’s surface. Therefore, the latitudinal temperature gradient which act as the driving force of mid-latitude baroclinic weather systems does not exist. Instead, in the vertical direction the atmosphere is unstable by being heated at the bottom and cooled by thermal radiation at upper layers. Thus, convective clouds such as cumulonimbi develop over most parts of the tropics. Further, this vertical convection appears not as separated cumulonimbi but as cloud clusters with a size of a few hundred kilometres as seen from satellite imagery. Despite this essential difference between the middle to high latitude regions and the tropics, there has been no attempt to treat explicitly the vertical convection in the tropics by a model equally explicit as the treatment of baroclinic instability in mid-latitude weather systems.

Especially in the tropics, climate change due to global warming is serious.

I would like to add that we must do all we can to support the creation of development opportunities for people in developing countries. Brilliant, talented persons may emerge from anywhere in the world. Fostering growth will help talent emerge and may help us to find new technological solutions that address the impact of climate change.

Q. How can research be translated into climate services that reach users effectively?

A. The key is to link research to operational centres. It’s also important to link different types of expertise. Atmospheric scientists should collaborate even more closely with hydrologists and water resource managers, who are concerned about changes in water balance.

In Japan, I am working as a programme coordinator for climate change projections. We are looking at projections of 300 years, 30 years and changes in extreme events. For our work to be meaningful, we include engineers, hydrologists and disaster prevention experts because they are the users of our results. They can best evaluate its effectiveness by use of the projected climate change data.

Q. In conclusion, what message would you like to convey to the WMO community?

A warm climate is ahead of us. We have to prepare. It’s clear, but it’s not easy.

A distinguished leader in climate research

An eminent research scientist in atmospheric dynamics and a distinguished leader in climate research, Matsuno’s leadership in climate and meteorological research and his devotion to the scientific community have contributed to the progress of studies on climate change.

He has also conducted important modelling studies on sudden stratospheric warming, such as when the temperature rises suddenly for a few days in mid-winter. Recently, he has been working on climate modelling and global change research projects. 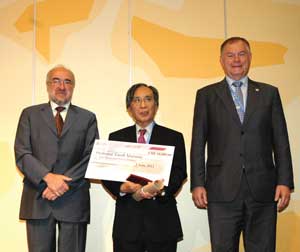 From left to right: M. Jarraud, Prof. Matsuno and A. Bedritskiy

Brillant, talented persons may emerge from anywhere in the world