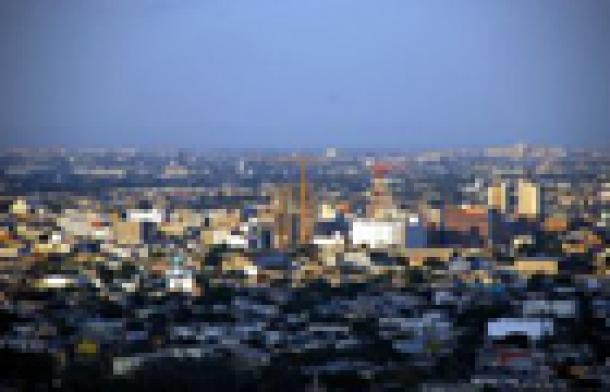 Urbanization is growing rapidly worldwide. At present, 3.2 billion people live in cities, accounting for about 50 per cent of the total population. It is estimated that the number of people living in cities will increase to 5 billion in 2030, which will be about 61 per cent of the total population. Moreover, urbanization is more rapid in developing countries than in developed countries. In China, the urban population is projected to grow from 170 million in 1978 to 870 million in 2017, an increase rate of 500 per cent (State of World Population, 2007).

In 2010, the number of large cities (with more than 1 million people) will reach about 125. A big city acts like a big “oven”, emitting a large amount of heat, air pollutants and waste materials. This large oven effect has profound impacts on many aspects of cities and their surrounding areas, including dynamical, thermo-dynamical, chemical effects and cycling interactions of air, water and soil (Xu and Tang, 2002). City weather services therefore face many new challenges in changing urban environments.

Impacts on urban weather and climate

In cities, natural vegetative surfaces are replaced by buildings and paved streets. These changes alter the surface absorption of solar radiation, heat storage capabilities and evaporation rates and result in significant changes in meteorological conditions, such as surface temperature, local turbulence and wind pattern. Measurements show that urban surface temperature is often higher than the rural one by 1 to 5, depending on the size of the city. This phenomenon is known as the “urban heat island” effect.

The urban heat island effect can modify local weather and climate (see Figure 1). According to Orville et al. (2000), the urban heat island produces a strong convergence of winds and resulted in a local effect of sea breeze in the urban area of Houston, Texas. This local convergence of winds further leads to increased thunderstorms, convective activities and changes of urban circulation (Semonin, 1981). In addition, these enhanced convective activities, combined with an increase of aerosol loading, appeared to cause more lightning activity (Orville et al., 2000).

An increase in the population of cities means that more energy is consumed for heating, air conditioning and transportation. In Mexico City, there are some 20 million inhabitants and some 3.5 million vehicles. The city’s energy consumption results in large emissions of air pollutants, such as gas-phase pollutants (sulphur dioxide, carbon monoxide, nitrogen oxides (nitric oxide and nitrogen dioxide) and volatile organic compounds), particular matter and toxic gases.

These air pollutants play different roles in atmospheric chemistry. The most harmful in urban environments are aerosols, ozone and toxic gases. Among these gases, sulphur dioxide is a main precursor for the formation of sulphate particles and emissions of particulate matter have a direct effect on aerosol concentrations. On the other hand, carbon monoxide, nitrogen oxides and volatile organic compounds (as ozone precursors) are major factors in the formation of ozone (Zhao and Tang, 2007).

With high nitrogen oxides and volatile organic compound emissions in Mexico City (Molina and Molina, 2002), hourly averaged ozone concentrations exceed the Mexican air quality standard of 110 parts per billion nearly every day and are often twice the standard amount (Garfias and Gonzalez, 1992). Toxic gases such as benzene can be released either as air pollutants by the exhaust fumes of vehicles or by accidents. Dense constructions arising from urban expansion reduces wind speeds and the dispersal of air flow, which tends to keep polluted air inside the city. As a result, the toxic gases released in large cities have more harmful effects on human health, especially during days when stratification is highly stable.

Scientists have been studying the effects of ozone on human health for many years, and found that ozone affects primarily the respiratory system. According to a study by Santa Barbara County Air Pollution Control District, California, roughly one out of three people in the USA is at risk of experiencing ozone-related health effects;

Aerosol particles can inflame and damage the lining of the lungs, leading to possible permanent damage and reduced quality of life (Parent et al., 2007). An air-quality management system developed by the Norwegian Institute for Air Research provides a series of products related to air quality and its interaction with human health, such as magnitude of air pollution, duration of exposure to air pollution, etc.;

Because of urban heat islands, urban temperatures are much higher than rural temperatures. As a result, in a very hot summer, heat waves often occur in large cities and can profoundly affect inhabitants. For example, in the summer of 2003, a heat wave in Europe caused 34 071 deaths in Italy and about 10 000 deaths in France. In Shanghai, during the past 10 years, the number of days with temperatures higher than 35°C reached 22—i.e. 13 days more than 30 years ago.

The potential for ozone to damage vegetation has been known for more than 30 years (Fuhrer and Achermann, 1994). A study by the Fifth Framework Programme of the European Communities within the Programme Energy, Environment and Sustainable Development (EU FP5 BIOSTRESS Programme) shows that ozone may affect the surface of plant leaves. Corrosive effects of ozone on the cuticles (a waxy layer that covers the surface of leaves) have been observed in trees which had been sprayed with ozone. As a result, many urban ecosystems and rural agricultural products are influenced by high ozone concentrations, especially rice, wheat and cotton.

A study under the CHINA-MAP project (the Yangtze Delta of China as an evolving Metro-Agro-Plex) suggests that high ozone concentrations have a significant influence on rice production in the Yangtze River Delta region where more than 15 large cities are located (Zhou et al., 2004).

Approaches to the new service developments

Through the WMO Global Atmosphere Watch (GAW) Urban Research Meteorological Environment (GURME) project, for example, the interactions of air, water and soil pollution in Beijing have been studied and an operational integrated monitoring network has been set up in the metropolitan area. Another GURME activity is improving air-quality observations with passive samplers and air-quality forecasts in cities such as Moscow, Mexico City and Sao Paolo. An air-quality decision-making system has been developed by the Technical University of Madrid, Spain. This is a robust tool to take emission reduction actions based on 72-hour air-quality forecasts. In Shanghai, under a GURME pilot project, an ozone warning system has been implemented and the Shanghai-MARAGE experiment has been carried out. From experience and lessons learned, several approaches should be taken as discussed below.

In order to meet the above needs, forecast and alert (early warning) systems for urban environments should be established. The systems require various measurements, methods such as statistics and diagnosis, and models, including a fine-scale meteorological model and a chemical (aerosol and ozone) model. A regional weather prediction model and a dynamical and chemical model have been adapted at the Shanghai Meteorological Bureau for new services. A fully interactive model system, including an interactive emission model and an environment impact model, is under development through cooperation between the China Meteorological Administration and the US National Center for Atmospheric Research.

Based upon improvements of the three-dimensional monitoring net works and the establishment of prediction and early warning systems, future urban weather services will provide not only the traditional weather services, such as forecasts, but, also, various alerts and early warnings. These new alert services will be distributed to emergency service organizations and disaster-management authorities such as government decision-makers (city and district), as well as sectors that are vulnerable to the impacts of severe weather such as the general public, villages, schools, hospitals and commercial enterprises. The public weather service will distribute the alerts or warnings through multi-communication channels, such as TV, cell phones, radio, newspapers and the Internet.

An example of the new services

The information system provides large-scale prediction of dynamical inputs, chemical emission inventory and land-surface information. The physical and chemical system is based on a recently developed regional dynamical/chemical model. This model will first predict small-scale meteorological conditions with higher resolution, depending upon the requirements. The output of meteorological conditions will be used as inputs of the chemical model to predict chemical composition and aerosol concentrations the next day. The impact analysis of chemical and aerosol concentration is then conducted. If the predicted ozone concentrations exceed the national standard, an early warning message will be issued and distributed to different levels of city authorities and the public.

In accordance with a multi-agency response policy, the Shanghai Meteorological Bureau will distribute a warning message to the public with colour-coded warning signals in either yellow or orange, according to their severity. The traffic control authority will conduct several emission-reduction strategies at certain districts in the city. The feedback from them is very important for assessing potential ozone reduction. Similarly, the health authority and hospitals are prepared for an abnormal increase in the number of patients suffering from respiratory disorders (Figure 4).

Rapid urbanization brings many challenges and new services are demanded in large cities. Many studies have been conducted in the fields of impacts of urbanization, such as urban weather and climate, urban atmospheric chemistry, residents’ health and urban ecosystems. Outcomes of these studies can be used to establish new operational services in the fields.

WMO has developed several guidelines and established several projects to help National Meteorological and Hydrometeorological Services (NMSs) improve their new services. As a result of practice, experiences and lessons learned, several approaches have been developed for monitoring and early detection, prediction and early warning, distribution and partnership.