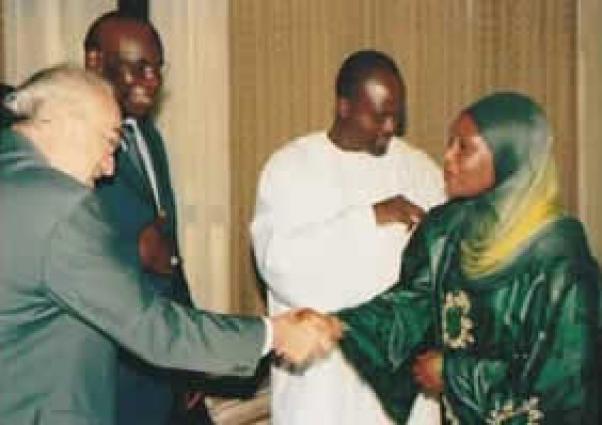 On 29 September 2008 the Secretary-General visited Amsterdam at the invitation of the President of the European Meteorological Society (EMS), to participate in the opening of the 8th Annual Meeting of the EMS and the 7th European Conference on Applied Meteorology. Mr Jarraud gave a presentation entitled “The evolving role of WMO in climate change adaptation”, which was followed by questions and lively discussion.

At the invitation of the Government, made through HE the Hon. Momodou Cham, Secretary of State for Forestry and the Environment, the Secretary-General visited The Gambia to participate in the The Gambia Climate Change Forum, which opened in Kololi on 6 October 2008.

Among the main session objectives was enhancing awareness on a number of key environmental reports, including the Fourth Assessment Report (AR4) of the Intergovernmental Panel on Climate Change (IPCC), which WMO has co-sponsored since 1988. Mr Jarraud underscored the importance of rapidly advancing both the mitigation of greenhouse-gas emissions and adaptation to the local effects of climate change. He welcomed the The Gambia climate change initiative and highlighted the urgent need for all Africa to address the climate change issue.

The Secretary-General met with HE Ajaratou Isatou Njie-Saidy, Vice President of the Republic of The Gambia, for discussions on sustainable development. He also visited the Central Weather Forecast Office at Banjul International Airport.

The Secretary-General attended the second 2008 regular session and retreat of the United Nations System Chief Executives Board for Coordination (CEB), chaired by the UN Secretary-General at United Nations headquarters in New York, on 24 and 25 October 2008. The session focused on climate change, staff security and safety, the financial crisis, the global energy challenge and the customary briefing on political, economic and social issues. Regarding climate change, CEB reviewed progress in the development of the common United Nations system approach, in which WMO, jointly with UNESCO, plays a key convening role in coordinating efforts to enhance climate knowledge, including climate system and impacts monitoring, assessment, predictions and early warnings on climate extremes. Climate knowledge supports five main focus areas: adaptation, mitigation, REDD (Reducing Emissions from Deforestation and Forest Degradation), technology transfer, capacity building and financing.

CEB reviewed the draft report prepared by conveners of all areas through the High Level Committee on Programmes. The resulting paper entitled “Acting on climate change: the UN delivering as one” was adopted for submission to Member States at the UN Climate Change Conference in Poznan in December 2008, as work continued toward the development of a common framework for presentation at the meeting of the Conference of Parties (COP) to the United Nations Framework Convention on Climate Change (UNFCCC) in Copenhagen in 2009.

The President of WMO and the Secretary-General visited China from 27 to 29 October 2008, to present the 53rd International Meteorological Organization (IMO) Prize to Mr Qin Dahe and the 2008 WMO Research Award for Young Scientists to Ms Sun Ying.

During their visit, they met with HEMr Hui Liangyu, Vice-Premier of the State Council of China, for an exchange of views on issues of common interest, in particular climate change and the role of the China Meteorological Administration (CMA), the enhancement of global cooperation and collaboration between China and WMO.

Messrs Bedritskiy and Jarraud visited CMA and were briefed by the Permanent Representative of China with WMO, Zheng Guoguang, on the achievements and the progress made in various areas, including satellite meteorology, disaster risk reduction and the key contributions of CMA to the recent hosting by China of the 29th Summer Olympics and the Paralympics Games.

Following a special invitation of the World Economic Forum, the Secretary-General visited Dubai between 7 and 9 November 2008, to participate in the Summit on the Global Agenda.

Mr Jarraud took part in a number of discussions in which he highlighted the role of WMO in natural hazard risk reduction and climate change, as well as WMO’s activities in support of its Members in the areas of climate change adaptation and natural disaster prevention and mitigation.

The Secretary-General gave a presentation entitled “Climate change and drylands: Impacts on natural resources and the role of WMO”, focusing on the key issue of ensuring long-term agricultural productivity while conserving land, water and biodiversity. Mr Jarraud underscored that sustainable development of regions affected by drought and desertification can only come about through concerted efforts based on a sound understanding of the different factors contributing to land degradation.

The Secretary-General visited Algiers on 19 November 2008 to participate in the African Conference of Ministers in Charge of Environment on Climate Change for Post-2012. The meeting was a high-level preparatory event for the COP 14 of the UNFCCC in Poznan, Poland, in December 2008.

Addressing the meeting, Mr Jarraud highlighted the importance of developing African climate change strategic plans, which will contribute to better prepare the continent for the impacts of climate change in the 21st century, including an effective regional framework for all the relevant national and regional climate change programmes, with a view to identify shortcomings and to remedy them in the African context, in particular by reinforcing and mobilizing the relevant structures and institutions.

The conference was also an opportunity for discussions with ministers and executive heads of international organizations present at the session.

The Secretary-General visited Poznan, Poland, from 9 to 11 December 2008, to attend the United Nations Climate Change Conference (14th session of the Conference of the Parties to the United Nations Framework Convention on Climate Change (UNFCCC)). He hosted a working lunch for 30 permanent representatives and other senior representatives of NMHSs, which provided an opportunity for free interaction and exchange of views among on the ongoing conference.

Mr Jarraud had a meeting with Elisabeth Lipiatou and Lars Mueller of the European Commission to discuss the participation of the Commission in World Climate Conference-3 (WCC-3) (August/September 2009).

The Secretary-General gave a press conference and a number of interviews with media representatives, in which he underlined the importance of climate information and prediction and the need to fill gaps in data observation networks, especially in developing countries. A press release was issued in the six UN official languages and was widely disseminated.

Mr Jarraud held a meeting with the Deputy Minister of Environment Mr Ales Kutak of the Czech Republic, which will have the next European Union presidency. Among the proposals was the possibility of the country hosting a preparatory WCC 3 meeting, and of support in ensuring high-level participation in the Conference.