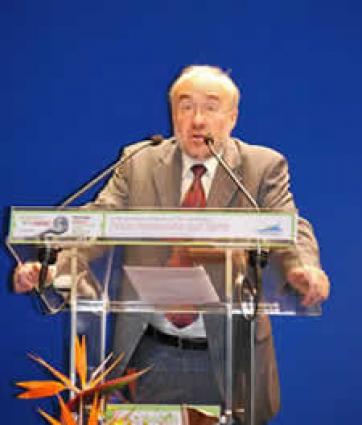 The Government of South Africa, through HE Mr André Okombi Salissa, Minister of Tourism and Environment of Congo and President of the African Ministerial Conference on the Environment (AMCEN), invited the Secretary-General to visit Johannesburg on 10 June 2008 and to participate in the 12th AMCEN session. In his address to the Conference, Mr Jarraud recalled that South Africa had made key contributions to sustainable development, environmental protection and food security, in particular by hosting in 2002 the historic World Summit on Sustainable Development in Johannesburg.

Mr Jarraud took the opportunity to visit the South African Weather Service (SAWS) and meet with the Permanent Representative of South Africa with WMO, Mrs Linda Makuleni, for discussions on international and regional cooperation and strengthening of National Meteorological Services. Mr Jarraud underscored the principal role of SAWS in the development of meteorology and hydrology and capacity-building within the South African Development Community (SADC) and beyond.

The French Presidency of the European Union invited the Secretary-General to participate in the international conference “The European Union and its Overseas Entities: Strategies to counter Climate Change and Biodiversity Loss”, which was held in La Réunion from 7 to 11 July 2008. In his address, Mr Jarraud referred to the key role of WMO in supporting adaptation to climate change and the development of appropriate strategies to offset climate change impacts on the biosphere.

Mr Jarraud visited the Météo-France office in La Réunion and met with Mr Paul Vergès, President of La Réunion Regional Council, for discussions on the benefits that National Meteorological and Hydrological Services of WMO Members, in particular those of the European Union, can provide to overseas territories in a wide regional context.

The Secretary-General visited Dhaka, Bangladesh, from 24 to 26 August 2008 to address the opening session of the International Symposium on Climate Change and Food Security in South Asia, organized by WMO, FAO, UNESCAP, Ohio State University and the University of Dhaka from 25 to 30 August 2008. Mr Jarraud also participated in a press conference on 25 August 2008 together with Ms Arjumand Habib, Director, Bangladesh Meteorological Department and Permanent Representative of Bangladesh with WMO,

On this occasion, Mr Jarraud met with Messrs Kamarul Hassan and Shah Mohammed Sultanuddin Iqbal, Secretary and Joint Secretary, respectively, Ministry of Defence. Mr Jarraud visited the Meteorological Department and had discussions with Ms Arjumand Habib. He addressed the senior staff and attended a reception held in his honour. Mr Jarraud also visited the SAARC Meteorological Research Centre in Dhaka and held discussions with senior staff.

On 31 August 2008, the Secretary-General made an address at a ceremony at the Bâtiment des Forces Motrices to celebrate the 20th anniversary of the Intergovernmental Panel on Climate Change (IPCC). Other speakers were Rajendra Pachauri, the IPCC Chair; Ban Ki-moon, UN Secretary-General; Moritz Leuenberger, Federal Councillor and Head of the Department of Environment, Transport, Energy and Communications, Switzerland; Achim Steiner, Executive Director, UNEP; and Roberto Acosta, United Nations Framework Convention on Climate Change. The Secretary-General also participated in a panel discussion on the evolution of climate change science since 1988, which followed the opening ceremony.

The Secretary-General was invited by the International Water Resources Association (IWRA) to participate in the XIIIth World Water Congress in Montpellier (1-4 September 2008), as keynote speaker on the theme: “Rising to climate change challenges in the water sector”.

IWRA organized the Congress to enhance knowledge and raise global consciousness of the critical impacts of global change on water resources. Mr Jarraud recalled, in particular, that at least six of the eight United Nations Millennium Development Goals (MDGs) are linked, directly or indirectly, to sustainable water availability and management and that achieving the MDGs could be imperilled if appropriate adaptation measures to climate change impacts on water resources are not adopted urgently. He reviewed further possible consequences on food security, hydropower generation, health, ecosystems and biodiversity in terms of the frequency and intensity of severe weather, climate and water events, while stressing that risk prevention and adaptation should become integral parts of development planning.

On 4 September 2008, Mr Jarraud visited Offenbach am Main to participate in the inaugural ceremony of the new headquarters building of the Deutscher Wetterdienst. The ceremony was presided by HE Mr Wolfgang Tiefensee, Federal Minister for Transport, Building and Urban Affairs. Mr Horst Schneider, Mayor of Offenbach am Main, was also present.

The Secretary-General seized the opportunity to thank Germany, through Mr Wolfgang Kusch, President of the Deutscher Wetterdienst and Permanent Representative of Germany with WMO, for more than half a century of fruitful cooperation with the Organization and for Germany’s vital support to WMO’s scientific and technical programmes and activities. Mr Jarraud recalled that German meteorology had a rich tradition that could be traced back to 1781 and the beginning of continuous weather observations at Hohenpeissenberg, within the framework of the Societas Meteorological Palatina, and the foundation of the Prussian Meteorological Institute in 1847.