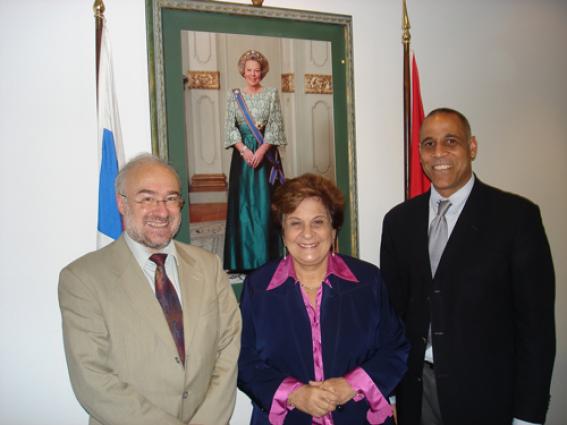 On 28 March 2008, the Secretary-General visited Washington DC with the President of WMO to attend a ceremony for the presentation of the 52nd IMO Prize to Jagadish Shukla at the US National Academy of Sciences. The event was chaired by James L. Kinter III, Director of the Center for Ocean-Land-Atmosphere Studies. Also present were Ralph J. Cicerone, President of the National Academy of Sciences; John L. Hayes, NOAA Deputy Assistant Administrator and Permanent Representative of the United States with WMO; Alan G. Merten, President of George Mason University; and a number of other distinguished scientific and academic figures.

During the high-level thematic debate, Mr Jarraud stressed climate-change impact risks in the area of food security, in particular for Africa, and WMO’s role in facilitating adaptation to this vital issue.

On 28 and 29 April 2008, the Secretary-General visited Bern to participate in the spring 2008 session of the United Nations Chief Executives Board for Coordination. The session was chaired by UN Secretary-General Ban Ki-moon and gathered the heads of UN System organizations and programmes to address a number of key issues, which included, in particular, food security and climate change.

On 6 May 2008, the Secretary-General visited the European Centre for Medium-Range Weather Forecasts (ECMWF) in Reading to participate in the opening of the World Modelling Summit on Climate Prediction. The Summit, which was jointly organized by WMO’s World Weather Research Programme, the WMO co-sponsored World Climate Research Programme and the International Geosphere-Biosphere Programme, brought together some of the world’s leading scientists with the objective of developing a new strategy for climate prediction.

The Secretary-General visited New York from 13-16 May 2008 to participate in the 16th session of the United Nations Commission on Sustainable Development (CSD-16).

He participated in the High-Level Segment of the session and the Closed Ministerial Meeting, where he underscored the relevance of WMO in a number of key thematic issues of CSD-16, in particular: agriculture, rural development, drought, desertification and Africa. He also made a presentation at the UNEP-hosted side event “Agriculture and environment: climate change and policy recommendations”.

The Secretary-General visited Athens on 29 May 2008 to represent WMO at the International Conference on Climate Change and Human Security, where he addressed the issue “Climate change: a challenge to human security”.

The Secretary-General gave a keynote presentation at the 28th session of the Conference of the Insurance Association of the Caribbean, held in Curacao from 1 to 3 June 2008.

The Secretary-General visited Warsaw on 4 June 2008 to deliver a keynote presentation at the high-level segment of the 38th International Federation of Agricultural Producers (IFAP) World Farmers’ Congress. Mr Jarraud’s presentation addressed the issue “Global warming and the impacts of changing weather patterns on food and agricultural production”.