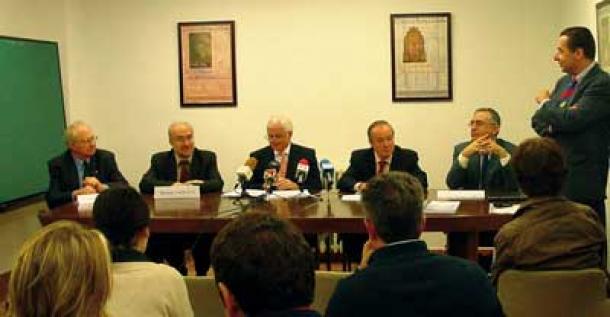 On 1 October 2007, the Secretary-General visited San Lorenzo de El Escorial, on the occasion of the Seventh European Meteorological Society (EMS) Annual Meeting and Eighth European Conference on Applications of Meteorology, which were held jointly over the period 1-5 October 2007. The focus of the EMS meeting being on high-impact weather, Mr Jarraud delivered a strategic lecture in the form of a presentation highlighting WMO disaster-risk reduction policy and activities.

In London, from 1 to 3 October 2007, the Reuters Environmental Summit gathered senior business leaders, investors, decision-makers and international officials, in order to focus on environmental issues and thereby provide an accurate analysis to better inform the public. The Secretary-General participated in the Summit on 2 October and briefed participants on WMO’s climate-related activities, in particular through several in-depth discussions and interviews with different Reuters correspondents. The talks centred mainly on climate-change issues and the role of WMO.

On 8 October 2007 in New York, the Secretary-General participated in the fifth session of the Management Oversight Board of the International Strategy for Disaster Reduction (ISDR), which was chaired by Sir John Holmes, UN Under-Secretary-General for Humanitarian Affairs and Emergency Relief Coordinator, as head of the ISDR System. Mr Jarraud highlighted WMO recommendations pertaining to cooperation among the UN system agencies concerned and activities organized to facilitate joint planning in the implementation of the Hyogo Framework for Action and disaster-risk reduction at the national and regional levels.

The Secretary-General visited Belgrade on 11 October 2007, to participate in the Sixth Ministerial Conference “Environment for Europe—Building Bridges to the Future”, which was organized by the United Nations Economic Commission for Europe (UNECE). The Conference focused on the state of the European environment and addressed key issues such as monitoring and assessment, implementation of multilateral environment agreements and the findings of UNECE environmental performance reviews. At the plenary, Mr Jarraud delivered the main keynote address “Capacity building: south-eastern European perspectives”, emphasizing the need for improved cooperation within the region and the fostering of international partnerships to raise the capacities of the countries concerned to cope with emerging issues related to climate change adaptation and mitigation. The Conference endorsed the establishment in Belgrade of a climate change centre for south-eastern Europe.

During his mission, the Secretary-General met with HE Boris Tadcić, President of the Republic of Serbia, and HE Božidar Djelić, Deputy Prime Minister. He also met with HE Saša Dragin, Minister of Environment, for discussions on climate change and natural disaster risk reduction issues. Furthermore, the Secretary-General visited the Republic Hydrometeorological Service of Serbia, where he was received by the Director and Permanent Representative of Serbia with WMO, Jovanka Andrejevic. Mr Jarraud also participated in the seventh Meeting of Directors of the South-east European National Meteorological and Hydrological Services, which was held in Belgrade from 11 to 12 October 2007.

The meeting brought together Directors of NMHSs, key development partners, representatives of regional and subregional economic and technical institutions and other stakeholders, in particular the Economic Community of West African States, the African Union, France, Portugal and the USA, in order to develop innovative ways to meet some of the vital challenges facing the countries of West Africa today. Among the principal outcomes of the meeting was the establishment of a Forum of Directors of NMHSs of West and North Africa.

In Buenos Aires, on 22 October 2007, the Secretary-General presented the WMO Research Award for Young Scientists to one of its two 2007 recipients, Paola Salio, for her paper entitled “Mesoscale convective systems over south-eastern South America and their relationship with the South American low-level jet”. Present at the ceremony were HE Nilda Garre, Minister of Defence of Argentina; Oscar J. Cuattromo, Undersecretary of State for Planning; Hector H. Ciappesoni, Permanent Representative of Argentina with WMO; and representatives of the University of Buenos Aires and the national meteorological community. In the course of his mission, Mr Jarraud visited the National Meteorological Service and held discussions on international cooperation in meteorology with the Permanent Representative and with key members of the Argentine meteorological community.

On 24 October 2007, in the course of a ceremony organized at the Oceanographic Institute of the University of São Paulo, the Secretary-General presented the 2006 Research Award for Young Scientists to Dr Walter Collischonn, who, on the occasion, also represented his five colleagues: Sidnei Gusmão Agra, Glauco Kimura de Freitas, Gabriela Rocha Priante, Rutinéia Tassi and Christopher Freire Souza. These six Brazilian scientists received the Award for their paper “Searching for an ecological hydrograph” (“Em busca do hidrograma ecológico”). Present at the ceremony were Rolf Roland Weber, Vice Director of the Oceanographic Institute, Antonio Divino Moura, Permanent Representative of Brazil with WMO, and senior representatives of other Brazilian scientific and environmental organizations.

On 26 and 27 October 2007, at UN Headquarters in New York, the Secretary-General participated in the regular meeting of the United Nations System Chief Executives Board for Coordination (CEB), chaired by UN Secretary-General Ban Ki-moon. The CEB is composed of the Executive Heads of all United Nations specialized agencies, funds and programmes, as well as the World Bank, the International Monetary Fund, the International Atomic Energy Agency and the World Trade Organization. The CEB contributes to UN coordination and cooperation over a wide range of substantive and management issues facing UN system organizations.

In particular, the Board agreed to work expeditiously towards the development of a UN system-wide strategic approach to support UN international commitments to meet the important challenges being presented today by climate change. On behalf of the Board, the UN Secretary-General presented a UN system-spanning coordinated action plan for the United Nations Climate Change Conference to be held in Bali in December 2007. The CEB further agreed on a process to ensure that the entire UN system would move decisively toward the establishment of climate neutrality in its operations worldwide.

On 5 November 2007, the Secretary-General visited Brussels to present the 2007 WMO Research Award for Young Scientists to the second 2007 recipient, Gabriëlle De Lannoy, for her paper entitled “Assessment of model uncertainty for soil moisture through ensemble verification”. The ceremony took place in the presence of the Permanent Representative of Belgium with WMO, Henri Malcorps, as well as senior representatives of Belgian scientific organizations, the meteorological community and other distinguished guests.

At the invitation of the European Commission and the Government of Portugal, the Secretary-General gave a keynote address and participated in panel discussions on “Climate change and development cooperation” during the second edition of the European Development Days, held in Lisbon, from 7 to 9 November 2007. The meeting focused on innovative ways to respond to the special needs of the most vulnerable countries, in particular in terms of adaptation measures, since these countries will be among those expected to suffer the largest impacts from climate variability and change.

On 16 and 17 November 2007, in Valencia, the Secretary-General participated in the 27th session of the Intergovernmental Panel on Climate Change (IPCC). The major session highlight was the approval and official release of the Fourth Assessment Synthesis Report and Summary for Policy Makers. Present at the closing ceremony were UN Secretary-General, Ban Ki-moon; Achim Steiner, Executive Head of the United Nations Environment Programme; IPCC Chairman, Rajendra Pachauri, senior representatives of the Government of Spain and the President of the Valencia Generalitat. “On behalf of the entire United Nations family”, Ban Ki-moon congratulated the present and all former IPCC Chairs, as well as the thousands of scientists who had worked tirelessly for the Panel, for their landmark achievement and the outstanding distinction received through the 2007 Nobel Peace Prize. He further congratulated WMO and UNEP for their common vision in creating the IPCC and their continuing efforts to support its work.

At the press conference which followed, the three senior UN system representatives responded to numerous questions by the international press through powerful messages on climate change and relevant policy issues. In particular, Mr Jarraud spoke of the need, now that the issue of climate change had been established, to increase observational and research efforts. This was because societies needed more detailed information about anticipated impacts at regional and local levels in order to be able to respond and adapt. Mr Jarraud also gave numerous interviews for print and broadcast media, including BBC World television news and BBC News 24.

On 30 November 2007, the Secretary-General visited Cape Town, on the occasion of the Earth Observations for Sustainable Growth and Development Ministerial Summit. He delivered a joint statement on behalf of the Food and Agriculture Organization of the United Nations, the United Nations Environment Programme, the United Nations Educational, Scientific and Cultural Organization, including its Intergovernmental Oceanographic Commission, and WMO. The joint statement welcomed an arrangement under which the governance of the Global Earth Observing System of Systems (GEOSS) would eventually become integrated with the UN system, so adding value to the various observing systems sponsored or co-sponsored by the UN organizations and by the non-governmental International Council for Science. The Ministerial Declaration further recognized the important contributions that GEOSS can make through collaboration with the UN system agencies.

The Summit, which was the first such event since the establishment of the international Group on Earth Observations, served to review GEOSS progress and to highlight the need for coordinated, comprehensive and sustained observations. More than 70 GEO members and 40 participating organizations were represented at the session.

The Secretary-General visited Berlin on 3 December 2007 to participate in the Group of Eight (G8) Conference on the Role of Foreign Policy in Guaranteeing a Secure Energy Supply and Protecting the Global Climate. On the occasion, Mr Jarraud made a statement on the issue “Climate change: a challenge to global security”, indicating that the consequences of climate change had the potential to pose considerable risks to global security, in particular through climate-induced degradation of freshwater resources, agriculture and health standards, as well as through climate-triggered migrations and an increase in the number and intensity of natural disasters.

On 10 December 2007, the Secretary-General attended the presentation of the 2007 Nobel Peace Prize, which was awarded to the WMO-UNEP co-sponsored Intergovernmental Panel on Climate Change (IPCC) and to Former US Vice-President Albert A. Gore, Jr. Mr Jarraud met with officials from the Norwegian Ministries of Foreign Affairs and Environment and International Development. He also visited the Norwegian Meteorological Institute for discussions on international cooperation.

The Secretary-General visited Bali from 13 to 15 December 2007 to address the High-Level Segment of the 13th session of the Conference of Parties (COP-13) to the United Nations Framework Convention on Climate Change (UNFCCC). He participated in a WMO press conference with the President of WMO, Alexander Bedritskiy, and met with permanent representatives of WMO Members and senior officials who were present in Bali for COP‑13 and the third meeting of the Parties to the Kyoto Protocol.