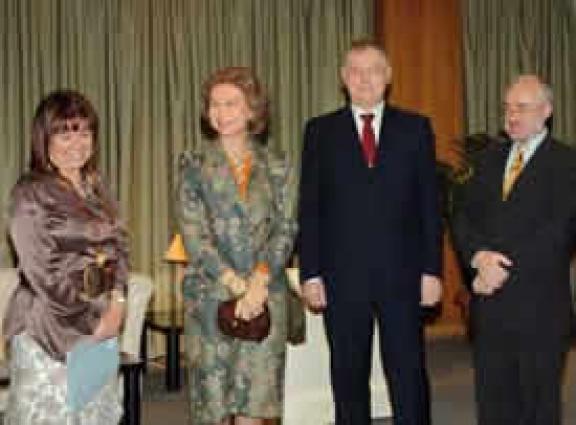 The Secretary-General, Mr Michel Jarraud, recently made official visits to a number of Member countries as briefly reported below. He wishes to place on record his gratitude to those Members for the kindness and hospitality extended to him.

The Secretary-General participated in the Global Launch of the International Polar Year (IPY) 2007-2008, which took place on 1 March 2007 at the Palais de la Découverte in Paris. Present at the event were HSH Prince Albert II of Monaco and Mr Thomas Rosswall, Executive Director of the International Council for Science (ICSU). In his presentation, Mr Jarraud described the global scope of the IPY and emphasized that, for the first time, an IPY would also be focusing on the social aspects, in addition to the more traditional scientific issues.

The Secretary-General also took part in the French national opening ceremony of the International Polar Year, held at the Palais du Luxembourg and chaired by Mr Christian Poncelet, President of the Senate. Present on the occasion were HSH Prince AlbertII of Monaco; Mr Christian Gaudin, Senator; Ms Catherine Bréchignac, President-elect of ICSU; HE MrsNelly Olin, Minister of Ecology and Sustainable Development; and HE Mr François  Goulard, Minister responsible for Higher Education and Research. In his speech, Mr Jarraud recalled the important contributions made by France in terms of exploration and research in the polar regions.

On 12 March 2007, the Secretary-General visited Manama, Bahrain, to participate in the inauguration of the WMO Office for West Asia.  The ceremony was attended by HECaptain Abdul Rahman Mohamed Al Gaoud, Under-Secretary, Civil Aviation Affairs; Mr Abdul Majeed Isa, president of Regional Association II (Asia) and Permanent Representative of Bahrain with WMO; and Mr Sayed Agha, United Nations Resident Coordinator and UNDP Resident Representative; as well as by the Heads of UN agencies in Bahrain and representatives of the Government of Bahrain, the private sector and universities.

In his inauguration speech, MrJarraud underscored some of the major objectives of the new Office. These included the identification of Members’ requirements and provision of WMO assistance in the formulation of project proposals for the development of the NMHSs concerned, as well as resource mobilization activities and the corresponding follow-up on actions to be undertaken in support of national and international projects in the subregion served by the new Office.

During his visit, the Secretary-General met with HH Shaikh Ali Al Khalifa, Deputy Prime Minister of Bahrain and other senior governmental officials, for discussions on technical cooperation and the strengthening of NMHSs.

The President of WMO and the Secretary-General visited Madrid, Spain, on the occasion of the International Conference on Secure and Sustainable Living: Social and Economic Benefits of Weather, Climate and Water Services, which was held in the city from 19 to 22 March 2007. In the context of his visit, Mr Jarraud met with HM Queen Sofía of Spain, as well as with senior Government officials; in particular, HEMrs Cristina Narbona Ruiz, Minister of Environment, whose mandate includes the National Meteorological Institute (NMI) of Spain.

The Secretary-General also held discussions on cooperation and the strengthening of NMHSs with the Director of the NMI and Permanent Representative of Spain with WMO, Mr Francisco Cadarso González, as well as with a number of permanent representatives of WMO Members attending the Conference.

The Secretary-General visited Curaçao from 28 to 30 March 2007, on the occasion of the 29th session of the WMO Regional Association IV (North America, Central America and the Caribbean) Hurricane Committee, which met in this city from 27 March to 3 April 2007. Mr Jarraud met with the Governor of the Netherlands Antilles, HE Mr Frits Goedgedrag, as well as with the Prime Minister, HE Mrs Emily De Jongh-Elhage, and the Minister of Education, Sport and Culture, HE Mrs Omayra Leeflang.

With regard to the Hurricane Committee session, Mr Jarraud joined the president of RA IV, Mr Carlos Fuller; the Permanent Representative of Netherlands Antilles and Aruba with WMO, Mr Arthur Dania; and the permanent representatives of RA IV Members present in Curaçao for discussions on international cooperation in reducing the impacts of natural disasters and support to socio-economic development. During a press conference, the Secretary-General stressed the importance of continued support by governments to their NMHSs, in order for them to be capable of fulfilling their fundamental mission in terms of the protection of life and property.

On 4 April 2007, the Secretary-General travelled to Rabat to participate in the Meeting on Climate Change, the Impacts on Water Resources and Adaptation Measures. The meeting was organized by the Secretariat of State in Charge of Water, through the National Meteorological Service, and held under the high patronage of HMKing Mohammed VI of Morocco.

At the opening ceremony, a royal message was followed by statements made by the Prime Minister, the Secretary-General of WMO, the Secretary of State in Charge of Water and the Chairman of the WMO co-sponsored Intergovernmental Panel on Climate Change. In his statement, Mr Jarraud referred to contemporary issues in natural disaster prevention and mitigation, climate change and the increasingly important role of Morocco within the regional context.

The Secretary-General visited Cairo on the occasion of the Regional Association I (Africa) Regional Workshop on Human Resources Development Planning, which was held from 14 to 18 April 2007, with the participation of 21 Least Developed Countries (LDCs) of Africa. The objective of the Workshop was to assist the participants in acquiring better knowledge and sharing mutual experiences of the newer aspects of human resources development planning and their implementation by National Meteorological Services.

Mr Jarraud visited the newly constructed building of the Regional Training Centre (RTC) Cairo and met with Mr Magdy A. Abass, Chairman of the Board of Directors of the Egyptian Meteorological Authority and Permanent Representative of Egypt with WMO, for discussions on the future role of the RTC.

On 20 April 2007, the Secretary-General participated in the first regular session in  2007 of the United Nations System Chief Executives Board for Coordination (CEB), which was chaired by the Secretary-General of the UN, Mr Ban Ki-moon, and held at the ILO headquarters. Following the conclusion of the session, in the evening of 20 April and on 21 April, the UN Chief Executives participated in a retreat at Mont Pélerin, which set the scene for an exchange of views on major issues in the UN arena, including, in particular, the subject of climate change and reform of the UN system.