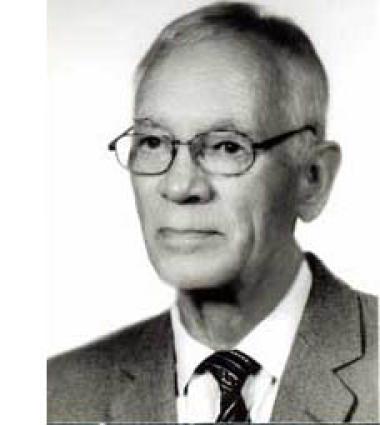 Eric Bobinski died in Warsaw, Poland, on 30 August 2008. He was born in 1926 in Moscow, where he spent his childhood and youth. In 1947, Eric went to Poland to study at the Warsaw Technical University in the Department of Engineering. He graduated in 1951 and the next year returned to Moscow for his doctorate on the foundation of river dams. In 1956, he went back to Warsaw and was employed in the design office “Hydroprojekt”. In 1959 he obtained a scholarship at Delft University, Netherlands, to follow the International Course on Water Engineering.

In the office “Hydroprojekt” Eric dealt with problems connected with the underground part of river dams. He introduced a few new methods to Polish design practice. Some of them were used on the Narew and Vistula Rivers. In 1961, he was appointed principal designer of the dam on the Vistula River in Wloclawek. He also supervised its construction, which was finished in 1970. This dam has been the greatest hydraulic work in the lowland part of Poland.

In December 1969 he was appointed Director of the National Hydrological and Meteorological Institute (PIHM). At the same time, he was promoted to the post of associate professor, Permanent Representative of Poland with WMO and member of the Executive Committee.

At the end of the 1960s, the observations and measurements were done without automation or telemetry and the data were sent by mail or by telephone and manually processed. Bobinski tried to improve the Institute’s position, with some success. He also strove to improve the working conditons of staff. In 1972 the five-day working week was introduced but he was dismissed for his pains.

Bobinski decided to remain in the Institute as a research worker, he knew PIHM and its problems well. During the period 1972-1992, he was head of the Hydrological Forecasting Division (HFD) in PIHM, which became the Institute of Meteorology and Water Management (IMGW) in 1973.

The Hydrological Forecasting Division is an important unit, as Poland suffers from flooding and droughts. The previous heads of the HFD were outstanding scientists—Julian Lambor and Zdzislaw Kaczmarek. In 1972, some modernization was badly needed. Bobinski faced three challenges: improvement of the hydrological forecast system, improved organization of operations and the introduction of new, physically based methods.

Bobinski was an attentive observer with an analytical mind. He formulated a strategy for the hydrological forecast and warning system, paying particular attention to its reliability and resistance and the negative role of random events. He wrote “floods are the best examiner of the efficiency of the warning system and simultaneously stimulate its development”.

Under Bobinski’s leadership, two large floods struck Poland. The first one in March/April 1979 in the northern part of the country, caused by snowmelt, was the worst disaster since 1888. The second one, on the Vistula River, upstream from the Wloclawek dam, was caused by a giant ice jam near the town of Plock at the beginning of January 1982. Vast areas were inundated. Subsequent flood losses were greatly reduced due to early and accurate warnings.

In HFD, deterministic mathematical models were introduced to everyday practice. For mountain areas, rainfall-runoff models were adopted and unsteady flow equations were adopted for the lower Vistula River. The new forecasting methods were based on field measurements. Some attempts were made to forecast precipitation and promising results were obtained.

Eric Bobinski was a good team leader. In HFD, he formed a group of hydrologists, mathematicians and physicists who could address difficult problems. Three of them prepared their doctoral thesis under his supervision. In 1989, he was elected Chairman of the Staff Council in the Institute of Meteorology and Water Management.

After retirement, Bobinski remained active. He lectured in hydrology and wrote the manual General Hydrology, which was published in 1983. In the period 1976-1984, he was a member of the Working Group on Hydrological Forecasting of the WMO Commission for Hydrology. He took part in the elaboration of the fourth edition of the WMO Guide to Hydrological Practices and participated in several symposiums and conferences. At the beginning of his engineering career he was involved in water projects in Iraq. For this reason he was asked to be a UN expert and consultant in five Asian countries: Nepal (1979), Burma (1981), Mongolia (1984), Viet Nam (1986) and Laos (1990) where he dealt with the irrigation of small areas.

People liked and respected Eric Bobinski for his intelligence, learning, memory and leadership. He was an honest and able man, who always tried to do his best. He was interested in many spheres of human life, including politics, economy, history, art and sport.

Eric Bobinski died on 30 August 2008 in Warsaw after a long illness and is buried in the family grave there. 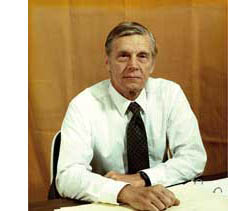 George Cressman, former Director of the US National Weather Service, died on 17 April 2008 in Rockville, Maryland, aged 88 years. He was a member of the generation—trained during World War II—that was responsible for the transformation of meteorology from a largely descriptive science to one based firmly on the principles of physics.

George Cressman was born and raised in the small town of West Chester in south-eastern Pennsylvania. He finished high school in 1937 and enrolled at Penn State University to study physics and meteorology. The Penn State programme was just being formed, built around two new faculty members: Helmut Landsberg and Hans Neuberger. After graduating with a BS degree in June 1941, Cressman applied for, and was accepted by, the new Army Air Corps training programme for meteorologists.

After the war, he received an offer from C.-G. Rossby to go to the University of Chicago. He eagerly accepted, becoming a member of the now famous Chicago School. At Chicago, he ran the synoptic laboratory and university weather station while pursuing his academic studies. He published three major papers dealing with forecast applications of Rossby’s work on the dynamics and propagation of long waves. These publications were accepted as his PhD thesis and he was awarded his degree in 1949.

After graduation, Cressman was recruited by Sverre Petterssen to serve on his staff as a consultant to the Air Force. He travelled extensively during this period and was involved in a number of special projects. One of those involved providing weather support—observations and forecasts—for tests of the atomic bomb in Nevada in the early 1950s.

In 1954, the Joint Numerical Weather Prediction Unit (JNWPU) was formed, with Cressman as its first director. Working extensively with colleagues from the Navy, Air Force and Weather Bureau, he set about the task of bringing numerical weather prediction into routine use in weather forecasting. It was a daunting task at the time. In retrospect, the research, development and implementation of numerical weather prediction, involving not just the JNWPU but researchers and practitioners worldwide, remains a superb achievement, perhaps one of the outstanding advances in science in the 20th century.

George Cressman was a hands-on leader, participating in every part of the sequence. His most lasting contribution, however, was the “objective analysis”, the precursor to today’s data assimilation. This step accomplished the part of the sequence involving the transfer of observations from their irregularly spaced locations to the regularly spaced points of the computational grid. The successful technique he developed was based on an idea developed earlier by Pall Bergthorsson and Bo Döös, and required careful attention to meteorological science, mathematical principles and computational requirements. It also required an engineering-like skill to “make things work”. The Cressman analysis method was widely used for many years in research and operations around the world.

The achievements of the JNWPU under Cressman’s leadership became the foundation for the development of modern weather forecasting in the USA, both civilian and military. Those achievements were shared freely among other nations and so contributed significantly to international advances in weather prediction.

In 1959, the military services and the Weather Bureau went their separate ways and Cressman became the first Director of the newly formed US National Meteorological Center (NMC, now NCEP) of the US Weather Bureau. NMC combined the mission and civilian parts of the JNWP unit with the older NAWAS organization, responsible for routine production of hand-drawn analysis and forecast charts.

In 1964, at the urging of Weather Bureau Director, Robert M. White, Cressman left NMC to accept a position as Director of National Meteorological Services for the Weather Bureau. One year later, when the Environmental Science Services Administration (ESSA) was formed, White became Administrator of ESSA and Cressman became Director of the National Weather Service—a position he held, under various administrations and ESSA and NOAA leaders from 1965 to 1979.

Geoge Cressman was a long-time supporter and contributor to the programmes of the World Meteorological Organization. He was elected in 1961 to a four-year term as president of the Commission on Aerology (the forerunner to the Commission on Atmospheric Sciences). In 1963, he became the first Chair of the WMO Advisory Committee which was to play a key role in the early phases of planning for the World Weather Watch and Global Atmospheric Research Programmes. As Director of the NWS, Cressman participated in all five sessions of Congress from 1963 to 1979 and played an important role in many international policy decisions, including the formation of world and regional meteorological centres.

In late1978, Cressman announced his intention to resign as NWS Director and to return to NMC—not as a manager, but as a researcher in the Development Division. His research included work on jet stream energetics and gravity waves and resulted in two published articles in journals of the American Meteorological Society (AMS).

George Cressman and his wife Frances shared an interest in travel and different cultures and travelled extensively in the 1980s. During an extended stay in China in 1982, he consulted with the China Meteorological Administration and Mrs Cressman taught classes in English. Together they developed a strong relationship with Chinese students that lasted for many years and, in Mrs Cressman’s case, still lasts today. In 1983, Cressman responded to a request from the Australian Government to help evaluate the Bureau of Meteorology. His report on the state of the Bureau and the opportunities for change is credited by many in the Bureau as providing an important justification for investment in the modern science-and technology-based service that exists in Australia today. In 1984, he performed a similar service for the Government of Spain. He retired in 1987, but kept up his intellectual interests and his hobbies of running, photography and music for a number of years.

Numerous awards have recognized Cressman’s contributions. He was awarded the IMO Prize of the World Meteorological Organization in 1978. His awards also include the Air Force Meritorious Civilian Service Award (1956), the Department of Commerce Gold Medal (1961), the Robert M. Losey award of the Institute of Aeronautics and Astronautics (1966), the AMS Award for Outstanding Contributions to the Advance of Applied Meteorology (1971), the AMS Cleveland Abbe Award (1976), and the Extraordinary Service Award of the Federal Aviation Administration (1980). He was particularly proud of the Distinguished Alumni Award from his alma mater, Pennsylvania State University (1979).

He was a Fellow of the AMS, the American Geophysical Union and the American Association for the Advancement of Science. In 1994, he was elected an Honorary Member of the AMS. He served twice on the AMS Council (1957-1959 and 1970-1972) and was president of AMS in 1978.

Many members of our community have contributed to the advance of our science and services in one particular way. Some have contributed in several ways. George Cressman was one of those rare individuals who contributed in many ways, nationally and internationally, across a broad range of our sciences and the services based on them. He will best be remembered, though, for his seminal contributions to the infant science and practice of numerical weather prediction and its application to society. He once summarized his career by saying “… I spent my professional life in pursuit of two main objectives: to learn how to integrate six simultaneous partial differential equations, and to figure out what to do with the answers.” He succeeded in this, but he also did more, providing—through his leadership and example—an inspiration to others who wished to work at the interface of science and public service.