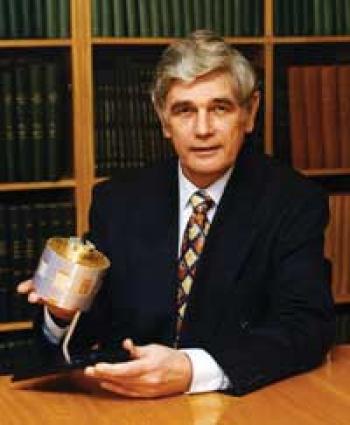 He chose to follow in his father’s footsteps by joining the Irish Meteorological Service in 1965. His career included spells as an operational forecaster at the meteorological office at Shannon Airport and in the Central Analysis and Forecast Office in Dublin, where his duties included regular appearances on television.

In his career at the Meteorological Service (Met Éireann, as it became known in 1995), Brendan progressed to a senior management position in 1978 as Head of the Dublin Airport Office and later became Met Éireann’s Head of Administration before being appointed Assistant Director in 1990. Along the way he helped to equip himself for a managerial role by successfully undertaking a Master of Business Administration degree. His distinguished career in Met Éireann was considerably amplified by two factors, namely his aptitude for the international aspects of meteorology and his writing.

Brendan grew to love the cut and thrust of international committee work and earned a reputation as an excellent performer, whether representing Ireland or as a popular choice for chairing meetings. His eloquence, consensus-building skills and excellent analytical ability were much appreciated by his international colleagues. Among the positions he held were Chairman of the Finance Committee of the European Centre for Medium-range Weather Forecasts, Chairman of the EUMETSAT Administration and Finance Group, and member of the External Advisory Group on Global Change, Climate and Biodiversity of the European Union Fifth Framework Programme. He was founding Chairman of the European Commission’s COST Technical Committee on Meteorology. He represented Ireland in many international meetings, including World Meteorological Congress.

In 1998, Brendan sought leave of absence from Met Éireann to take up the fulltime position of Director of Administration of EUMETSAT in Darmstadt, Germany. Brendan’s international experience had prepared him well for this position and during his period at EUMETSAT, up until his retirement in 2004, he worked as part of the Management Board planning the next series of satellite programmes that have recently come on-stream—Metop-A, Europe’s first polar-orbiting weather satellite, being a case in point.

However, for very many Irish people, Brendan McWilliams will always be remembered for his famous “Weather eye” column in the Irish Times daily newspaper. A few articles submitted to the Irish Times led to his being asked to start a daily column in 1988. Amazingly, he managed to maintain the challenge of turning out a column six days per week for almost 20 years and had never missed one until his final illness. In doing so, he succeeded in presenting scientific facts and information in a manner that was readily digestible to his readers.

His subjects ranged over all of meteorology, often straying into other disciplines such as astronomy, physics, mathematics and more. He drew on folklore, the classics, literature and even sport (one of the few areas of life that baffled him!). The articles were concise masterpieces of elegant writing, entertaining as well as informative, and imbued with a deft sense of humour. He added meticulous research and a passion for accuracy to a great natural gift for writing.

The fame of these articles spread well beyond Irish shores and two books containing collections of selected articles were published. His contribution to promoting a greater understanding of meteorology and science in Ireland is immense. Not the least of his achievements lay in his elucidation of the climate change challenge and the gentle rebuffing of erroneous ideas.

For all the depth of his scholarship and erudition, Brendan wore them lightly and modestly. He was good company and his humour and delicious sense of irony were often used to good effect. His courtesy and affability never failed him and colleagues search in vain to remember an occasion when he ever complained about anyone.

He was devoted to his wife, Anne (a gifted artist who designed the Met Éireann logo, based on a motif from the Tara Brooch, a famous example of Celtic art) and to his children and grandson. He bore his illness with fortitude and patience. Those of us who knew him can consider ourselves privileged to have done so.