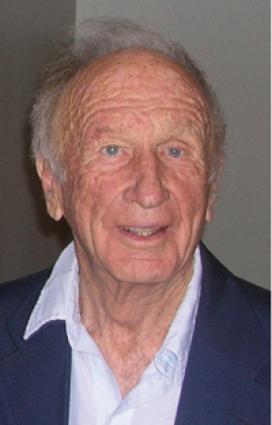 The curriculum vitae of Ed Lorenz is commendably brief. Apart from his list of publications, it more or less fits onto one page. Ed was born on 23 May 1917 in West Hartford, Connecticut, USA, and married Jane Loban in 1948. They had two daughters and a son, who survive him. Ed received a number of degrees, mostly honorary, and a number of prizes, many rather notable (e.g. the Crafoord Prize, 1983; the Kyoto Prize, 1991; and the IMO Prize, 2000). Originally trained in mathematics, Ed had a spell in the US Army, where he served as a weather forecaster. Most of his career was spent in the Meteorology Department of the Massachusetts Institute of Technology with sabbaticals and shorter visits to a number of institutes in the USA and Europe. Ed described his areas of specialization as: atmospheric circulation, atmospheric predictability and chaotic dynamical systems. He was a keen outdoorsman who enjoyed hiking and cross-country skiing.

So here is evidence of a distinguished academic, but also of a modest man. Could one ever know from this CV that Ed’s research fostered what many refer to as the third great scientific revolution of the 20th century?

The advent of chaos theory in the second half of the 20th century brought about a revolution in science, which has left untouched hardly any scientific discipline (whether physical or biological). At its essence, it brought about the most profound paradigm shift to rival that of quantum or relativity theory. Simply stated: the complex or apparently random behaviour of many physical or biological systems in the world around us does not imply that the equations which describe the evolution of these systems are themselves highly complex or random but may rather indicate the presence of one of the most tantalizing, exquisite and breathtakingly beautiful geometries that nature has to offer—the fractal geometry of the strange attractor.

One can do no better to understand the importance of the celebrated 1963 paper than to quote from Ian Stewart’s book Does God Play Dice? (Stewart, 1997) (his italics):

“When I read [Lorenz’s] words I get a prickling at the back of my neck and my hair stands on end. He knew! Thirty-four years ago, he knew! And when I look more closely, I’m even more impressed. In a mere 12 pages, Lorenz anticipated several major ideas of non-linear dynamics before it became fashionable, before anyone else had realized that new and baffling phenomena such as chaos existed.”

Fascinated by the predictability of weather, Lorenz chose to study highly truncated versions of the equations for the Rayleigh-Benard convection problem. Picking up on earlier work by Saltzman, he used his extraordinary intuition to posit that much of the irregularity of these equations was contained in a three-dimensional core. He used linear stability analysis to focus on Rayleigh numbers which make the system linearly unstable. In order to investigate the non-linear behaviour of this linearly unstable system, Lorenz coded his truncated equations on a digital computer. The realization that an investigation of the properties of his system would require integration on a computer, in addition to analytic diagnosis, itself required insight—digital computers were not routinely used to study the mathematical properties of differential equations in the early 1960s. After an initial period, when the system evolved in a regular way away from an unstable fixed point, it then behaved completely irregularly.

Lorenz then set about analysing this irregularity. He plotted trajectories of the system in the three-dimensional state space. The trajectories lived on a geometric subset of state space. This geometry had the shape of a butterfly with two wings at the back, but merged into a single layer at the front (see figure below). However, Lorenz knew that the trajectories of a deterministic differential equation cannot merge, hence, what looked like a single sheet at the front must really be two sheets together—but that meant that each sheet at the back was double, too. He wrote: “We conclude that there is an infinite complex of surfaces each extremely close to one or the other, of two merging surfaces”. Lorenz had discovered the fractal structure associated with the attractors of chaotic systems—a landmark in scientific analysis!

In what is now a famous story, Lorenz wanted to study a piece of the solution in greater detail. He re-ran the equations from a saved “dump”. But the numbers in the dump had been truncated and he found that the solution diverged totally from the original solution. The irregularity of the solutions also gave rise to an inherent unpredictability.

The term “butterfly effect” has been coined to describe chaotic amplification of error. In fact, his less well-known 1969 paper is actually more directly linked with the real “butterfly effect”—that arbitrarily small-scale disturbances can affect large-scale disturbances. As a historical note, Ed used the metaphor of a sea-gull flapping its wings, rather than a butterfly! Ed gave an excellent layperson’s account of chaos theory in his book The Essence of Chaos (Lorenz, 1993).

Consequences of the 1963 paper

This has been a long-standing problem in numerical weather prediction. The advent of computers in the 1950s and their subsequent development in the 1960s and 1970s led to more and more numerically accurate representations of the fluid dynamical equations. On average, the accuracy of weather forecasts from such models improved steadily over these decades. To many users of such deterministic (i.e. single best-guess) forecasts, however, these models are not trustworthy because of occasional forecast failures.

As well as explaining the underlying scientific reason why such forecast failures are inevitable in a chaotic system, Lorenz’s work provides a potential methodology to mitigate the problem. In particular, whilst individual trajectories are unstable to small perturbations and therefore unpredictable, the evolution of the probability distribution of the initial state is not. The figure presents a way forward in the light of underlying chaos. By predicting the evolution of the underlying probability distribution of initial states, we can assess, ahead of time, whether the state resides in a subset of the attractor where state evolution is especially sensitive to initial error.

In the 1980s, the development of numerical weather prediction systems took advantage of the power of supercomputers to move in a radically different direction to that of solely increasing numerical resolution; in the light of Lorenz’s work, the first ensemble prediction systems were developed. Ed was particularly interested in this and anticipated some of the current developments.

Lorenz was keenly aware of the conceptual difference in predicting weather and predicting climate. We now use his terminology (Lorenz, 1970) routinely: predictions of the first kind are essentially initial value problems, predictions of the second kind are essentially boundary or forced problems. The problem of anthropogenic climate change is predominantly (but not exclusively) a prediction of the second kind: how are the statistics of weather affected by some prescribed change in atmospheric greenhouse-gas concentration?

Uncertainties in predictions of the second kind arise from uncertainties both in the underlying forcing and in the model equations. Understanding the latter is critical for making reliable predictions of climate change. As elucidated in the Lorenz (1969) analysis, the effect of unresolved small-scale processes in climate models can propagate upscale and affect large-scale variables such as global mean temperature. In current climate models, individual cloud systems, so critical to climate change estimates, are not resolved and have to be represented by approximate formulae (so-called parametrizations).

The Fourth Assessment Report (AR4) of the Intergovernmental Panel on Climate Change has recognized that the only way to deal with this problem is to make use of the ensemble methodology, as discussed above. Hence, in AR4, predictions of climate change are expressed in probabilistic terms, making use of what is known as a multi-model ensemble.

Lorenz fully understood the implications of this error cascade from small to large scales and realized that model equations would ultimately have to be stochastic (Lorenz, 1975). Today, the development of stochastic parametrizations in weather and climate models is an area of cutting-edge research.

Lorenz’s work in areas other than chaos theory also had a profound effect in meteorology. He wrote a seminal report (Lorenz, 1967) discussing the circulations of the atmosphere from an energetic perspective, i.e. in terms of how weather systems can be viewed as manifestations of the processes which convert solar-forced potential energy to kinetic energy. He introduced the concept of available potential energy, widely used today, in this study. He advanced the first plausible explanation of the observed vacillation between weather regimes in both the atmosphere and in laboratory apparati. He also worked on numerical integration and discretization schemes for weather and climate prediction (e.g. Lorenz, 1971), some of which are still in use today. His work on balance conditions for initialization procedures (e.g. Lorenz, 1992), including the general impossibility of uniquely separating atmospheric flows into slow and fast components, is of considerable importance for the problem of data assimilation in meteorology and oceanography. He also worked on the problem of adaptive observations, i.e. how to locate observations in regions of dynamical sensitivity, where they would be of special value for improving forecast skill (Lorenz and Emanuel, 1998).

So, here was one of science’s giants. When Ed died on 16 April 2008, aged 91, media around the world announced the passing of the “pioneer of chaos theory”. For those of us privileged to have known him, this massive worldwide attention, although fully deserved, seemed somewhat incongruous, given the modesty of the man. If he could see all these reports and obituaries, including this one no doubt, I could imagine him commenting rather drily: “I really can’t see what all the fuss is about!”

Lorenz, E.N., 1969: The predictability of a flow which possesses many scales of motion. Tellus, 21.