Reducing Disaster Risk in Cities — the Republic of Korea’s Experience 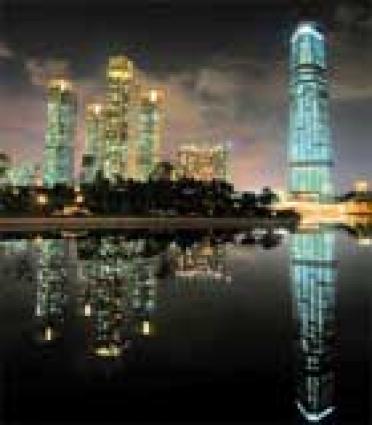 Reducing Disaster Risk in Cities — the Republic of Korea’s Experience

As the Third Session of the Global Platform for Disaster Reduction in May 2011 reminded us, half of humanity is now living in cities. By 2050, urbanization will rise to 70 per cent and urban risk will increase as well. In cities and towns around the world, mayors and municipal authorities have been taking steps to protect their populations and their economies. Climate information is one of their most important tools, even more so in a changing climate where more frequent and intense extreme events put populations and economies at risk.

Local action will increasingly rely on partnerships between local and national governments and, in particular, with national hydro-meteorological services and universities, as well as with technical and private sector institutions that provide climate information. Yet in many cases, city governments and hydro-meteorological offices are unfamiliar with each other’s roles, capacities and needs.

The Incheon REMAP promotes integrating disaster risk reduction and climate change adaptation in urban development, land-use planning and physical planning. It also calls for an increase of user-friendly climate information that can help guide informed actions at the local level. The Republic of Korea’s international leadership in this area mirrors its growing commitment to domestic risk reduction.

The Republic of Korea is prone to numerous natural hazards, including typhoons, floods, droughts, landslides, snowstorms, tsunamis and earthquakes. Heavy rainfall and typhoons are the most frequent and destructive. Two-thirds of these disasters occur in the summer months, between June and September, when the monsoon season brings heavy rainfall averaging 383 ml (about 24 inches) that often triggers flooding and landslides in country’s mountainous landscape. In July and August, typhoons originating east of the Philippines frequently travel towards the Korean Peninsula.

Climate change is further aggravating these challenges. From 1912 to 2008, the average temperature in the Korean Peninsula has increased by 1.7°C and rainfall has increased by 19 per cent. Studies have shown an increase in average rainfall intensity and a strengthened average minimum pressure in typhoons.

The Republic of Korea is committed to mitigating or lessening the effects of natural disasters by improving land-use planning, particularly in floodplains and on steep slopes; upgrading building standards for schools, hospitals and other critical infrastructure; enhancing the protection of forests and wetlands; and strengthening early warning systems and preparedness capacities. All of these endeavours rely on climate information.

In 1960, only 38 per cent of the national population of the Republic of Korea lived in cities. Due to rapid industrialization and economic growth, by the turn of the millennium, this number skyrocketed to 88.3 per cent. Today, the capital city of Seoul and its surrounding five satellite cities of Ilsan, Bundang, Sanbon, Pyeongchon and Jungdong are home to more than 20 million people, or 47 per cent of the nation’s total population.

This rapid population growth in urban areas led to housing shortages and increasing land prices in cities. To address this problem, the government increased the supply of land available for residential construction and built small housing units. Land-use planning is at the heart of these efforts and disaster risk reduction is playing an increasingly prominent role in guiding these plans.

In the Republic of Korea, land use planning involves roles and responsibilities distributed between national and local authorities. Climate information plays a vital role in support of these planning processes. Land-use planning and water resources are managed by the Ministry of Land, Transport and Maritime Affairs. National laws govern land-use planning and zoning regulations through the National Land Plan and Utilization Act. The City Planning Law applies to urban areas and establishes limitations on zoning and building plans. Individual buildings are further subject to a building law for individual buildings.

Metropolitan city governments and local governments have the authority to develop city plans. These plans are submitted for approval to the Ministry of Construction and Transportation. The Comprehensive Flood Mitigation Plan (CFMP) policy further requires that all city plans consider disaster risk reduction factors. CFMPs are approved by a special NEMA committee. Experts from local universities and technical institutions are often hired by city governments to develop the CFMP using historic weather information from the KMA and historical disaster damage and loss data from NEMA or the disaster mitigation division in the city government.

Protecting schools and hospitals from disasters is essential for saving lives. While most hospitals are constructed by the private sector, schools are within the public domain. School facilities are subject to national laws that require earthquake-resistant design for buildings higher than three storeys. In addition, the 2001 Comprehensive Earthquake Prevention Plan of Seoul Metropolitan Government requires that every existing building of any type be examined.

In local school districts, school principals carry out a monthly check of the condition of the buildings based on earthquake-resistant design standards. Local authorities have also established and are implementing mid-term and long-term reinforcement plans to strengthen earthquake resistance. To date, there are no regulations that directly address school safety standards in relation to storms and floods.

However, maintaining urban drainage and water management systems is regarded as an essential factor for mitigating flood risk. A national law governs the design and maintenance of drainage systems. The Ministry of Environment is responsible for developing technical standards. During the process, local governments provide feedback to the Ministry through public hearings. City governments also participate in developing supporting enforcement ordinances and regulations.

In general, city governments are responsible for maintaining sewage systems and levees, with the exception of levees along larger rivers, which are maintained by the national government. The KMA provides valuable hydro-meteorological data to municipal government departments such as the water management bureau. These departments then analyse the data using their own models and processes.

These standards are reviewed and renewed every five years. Climate change is now an established factor in reshaping design standards. The city of Seoul announced its plans to expand capacity levels to 100 ml per hour, which may include increasing the sewer pipe capacity, building additional pumping facilities and other measures.

More recently, in an effort to promote design standards for resilience in a changing climate, NEMA and the Ministry of Land and Maritime Affairs have launched a cooperative initiative that studies the effects of climate change on rainfall, snowfall and typhoons in the Republic of Korea. Through this project, the national government and an expert team from the University of Inha are working together to apply climate information to issues that concern national and city governments.

The focus on land-use planning and structural safety and resilience are only two elements of a much broader programme of disaster risk reduction in the Republic of Korea. Cities are now beginning to integrate climate change adaptation efforts into their plans. Guided by the internationally agreed Hyogo Framework for Action, the Republic of Korea already reports substantial progress in achieving many indicators. Early warning and preparedness, in particular, stand out as key components of national and local disaster risk reduction strategies.

The national government and the Local Headquarters for Disaster and Safety Management, which both receive alerts from KMA, have responsibility for informing citizens and managing evacuations. Community-based preparedness, another key feature of the Korean approach to building resilience, brings climate information directly into people’s homes. The ancient custom of Phom-A-Si, or working in turn for one another and exchanging services, has been practiced since the Yi Dynasty (1392 to 1910), and today serves as the basis for volunteers’ participation in disaster relief activities.

More formally, Community Volunteer Disaster Prevention Teams have been established. While the national government provides training to the heads of these teams, local government assumes responsibility for educating the wider team, including in the appropriate response to seasonal forecasts and early warnings.

A culture of cooperation

Looking at the experience of cities and communities in the Republic of Korea, it is clear that disaster risk reduction and prevention requires a culture of cooperation. This means that community organizations, civil society, women and youth, academic and technical institutions, and the private sector must all work together towards this goal.

Recognizing the power of global cooperation, the Government of the Republic of Korea, in partnership with the city of Incheon and the UNISDR Office for Northeast Asia, has launched a Global Education and Training Institute for Disaster Risk Reduction (GETI) at Incheon. GETI’s goal is to build resilience to urban risk by integrating disaster risk reduction and climate change adaptation into economic and social planning. To realize its goal, GETI advances investment in disaster risk reduction and climate change adaptation through advisory and training initiatives, targeted advocacy, expert and peer-to-peer learning, and technology transfer.

GETI was launched by the United Nation’s Secretary-General, Ban Ki-moon. In his speech, he emphasized GETI’s commitment to equip a new generation of urban planners and city managers with state-of–the-art knowledge of risk sensitive development to better manage emerging risks from a changing climate. GETI provides education and training as another way to raise awareness among government authorities.

Active cooperation between national and local governments is essential for effective disaster risk reduction, and the role of national hydro-meteorological services and other providers of climate information is fundamental. While the basic elements are in place, with a more concerted effort, partnerships between these institutions can grow into a formidable alliance for resilience.