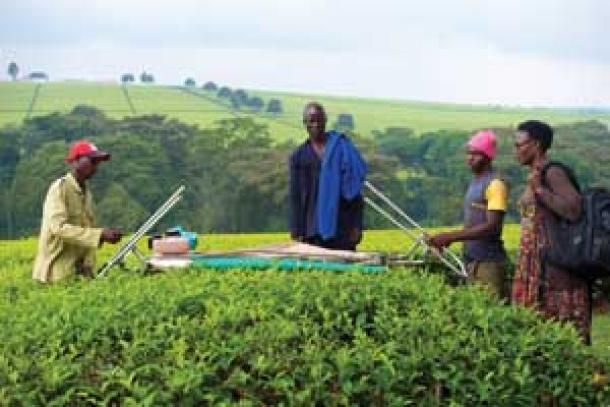 Vociferous debate has been underway over whether a rise in malaria in the Kenyan highlands, observed during the last thirty years, can be associated with local temperature changes, and whether these changes are connected to global climate change processes. Many studies document the debate (12, 16, 18, 19). The case of the Kenyan highlands is pertinent as other parts of Africa face similar challenges including highlands of Ethiopia, Rwanda, Burundi and the United Republic of Tanzania.

A new study (2), supported by the Kenyan Meteorological Department, establishes a long-term warming trend at Kericho, in the Kenyan highlands, and associates the trend partly with sea surface and land surface temperatures in the tropics. The study provides important evidence to resolve the debate. It also demonstrates that partnership with National Hydrological and Meteorological Services is essential to ensure that the most climate-relevant data and services are available.

Malaria is the best-known disease that is sensitive to changes in climate. The dynamics of its transmission are complex, with interactions between multiple, constantly changing factors that are challenging to measure. The development of the mosquito vector and parasite are temperature-dependent and so transmission models are highly sensitive to variations in ambient temperature.

To make use of new opportunities for climate-related health risk management, the health community must:

Likewise, national meteorological and climate communities need to take steps to provide effective, policy-relevant climate information and services for the health sector. The Global Framework for Climate Services, the key outcome of the World Climate Conference-3 (2009), along with African initiatives such as Climate for Development in Africa, will address the availability of data, tailored climate services and effective relationships that focus on user needs. Services should be tailored to demand and the health community should make its needs heard (18, 19). For this reason, the full Kericho study has been published within health circles and this companion article has been prepared for the meteorological community.

Since the suggestion in 1998 that global warming may trigger geographic spread of malaria transmission into previously malaria–free highland areas (1), multiple peer-reviewed publications, newspaper articles, editorials and blogs have been written without resolving the debate. The controversy has centered on tea estates in Kericho, an East African highlands district that lies 1 600 to 3 000 metres above sea level, west of the Great Rift Valley in Kenya. The region is ideally suited for growing tea, with its warm climate and well-distributed rainfall. Over 30 years of laboratory-confirmed malaria incidence data are available from the Brooke Bond (Unilever) tea estate health facilities, with careful attention to intervention coverage, demographics and environment. Local, official climate data have not been available, leading to debate about the correlation between temperature trends and malaria.

A time series of quality-controlled daily temperature and rainfall data from the Kenya Meteorological Department observing station at Kericho has helped to resolve this decade-long controversy. A significant upward temperature trend has occurred over the last three decades. These results support the view that climate should be included, along with factors such as land use change and drug resistance, when considering trends in malaria and the impacts of interventions for its control.

Controversy: Some found it hot, some not

Previous studies of Kericho and elsewhere in the East African highlands provide strong evidence of resurgence and emergence of malaria in the 1980s and 1990s (3). This trend may have been arrested or reversed in some areas by large-scale malaria interventions since 2005. Studies using malaria data from the Kericho tea estate argued that climate changes were not a significant factor contributing to the trend observed (3, 4). The reason that previous studies disagree is that researchers had limited access to quality data from Kericho meteorological stations. Studies relied heavily on short-time series of station data, with inadequate quality control, or ignored local ground observations completely in favour of interpolated data that are intended for regional or global-scale analyses, and use only a fraction of the stations maintained by National Meteorological and Hydrological Services. As a result, analysts relied on the interpolated temperature surfaces, a poor choice for local-level analyses. These limitations have been clearly stated by the producers of these data (5).

Although available within national meteorological services, the cost to obtain daily records is a significant constraint. Technical, capacity and institutional gaps need to be bridged to enable full access, quality control and proper use of these data (6).

Public domain, gridded climate data have improved for many parts of the world but their accuracy relies heavily on the quality and consistency of observation input data. Given inadequate access to station observations, many studies of Kericho temperature trends based their analyses on versions of gridded data developed by the Climate Research Unit of the University of East Anglia. The data are monthly mean values of surface climate variables for global land areas developed for continental or global applications (5). The lack of agreement regarding temperature trends over Kericho has largely resulted from the use of these interpolated data.

Previous analyses of the Kericho tea estate malaria data with local monthly averaged meteorological observations recorded at the Tea Research Foundation found no evidence of significant changes in climate during the period of observed malaria increase (3,7). The authors concluded that drug resistance, rather than climate change, was the likely cause of increased malaria transmission. Furthermore, Fourier Analysis of an extended version of the same data set was used to infer that the observed inter-epidemic period of malaria incidence at Kericho was related to population dynamics rather than cyclical changes in temperature or rainfall (8,9). Including the Southern Oscillation Index in the analysis did not change the result. Subsequent studies by the same authors were reinforced by the University of East Anglia gridded data set (4, 9-12) and led the authors to conclude that “analyses of malaria time-series at sites such as Kericho have shown that malaria incidence in the Kenyan highlands has increased in the absence of co-varying changes in climate.” (10)

Others drew attention to the inappropriate use of the UEA data (13), while some misconstrued the results to be based on local official meteorological records and concluded that climate cannot be considered an important factor in the frequency and intensity of malaria epidemics in the Kenyan highlands. For example, a 2008 review article on malaria and global warming (14) referred to the Kericho analysis (18) and wrote, “Moreover, a set of well-maintained meteorological records shows no significant change in temperature over recent decades.” Other studies (9,15,16) have made conclusions along the same lines.

Three recent versions of the University of East Anglia data were compared in the latest study, the most recent incorporating an additional four years of observations; all were examined for temporal consistency. The local, observed climate variations at Kericho were also compared with larger scale climate variations, including tropical sea-surface temperature and the El Niño-Southern Oscillation.

The Kenya Meteorological Department (KMD) bridged the data gap by constructing digitized time series of daily maximum and minimum temperature and accumulated precipitation for the Kericho observing station (33.35E, 0.36S). The data cover 1 January 1979 to 31 December 2009 for maximum and minimum temperatures and precipitation for the period 1 January 1980 to 31 December 2009. The KMD Institute of Meteorological Training and Research in Nairobi performed quality control, including:

An adjusted monthly time series of maximum, minimum and mean temperatures was examined for statistically significant temporal trends between 1977 and 2009. Upward trends on the order of +0.2°C per decade were found for all three of the temperature variables. While local factors may contribute to the upward trend at Kericho, it was found to be consistent with trends in the global tropics. This indicates that both local and large-scale climate variations are likely at work and gives additional validity to the finding of an increasing trend in temperatures at this site.

The value of reliable data

Climate remains a potential driver of malaria. Climate measurements, made outside of the health sector, are unique because they are recorded according to globally recognized standards at defined, regular time intervals. This allows for systematic analysis at local and global scale, in order to allow comparison across geographical sites and over extended time periods. The fundamental characteristics of climatology, seasonality, diurnal rhythm and potential predictability at multiple timescales (weather, seasonal, decadal and longer) make them ideal as additional information layers for the health sector to apply in malaria vulnerability assessment, surveillance and forecasting.

Climate data helps us understand the epidemiological characteristics of malaria in a changing global environment. A prerequisite is relevant quality control for both climate and epidemiological data. The positive trends in all three climate variables (mean temperature, maximum and minimum temperatures) suggest that climatic factors in Kericho cannot be dismissed as a driver of variability and trends in malaria incidence.

While the significance of the warming trend observed in this study (>0.2°C per decade) to changes in malaria transmission potential has yet to be assessed, indications from other studies suggest that in this region, even a modest change in temperature can have a significant effect on transmission (16, 17). To ensure adequate understanding of climate processes in disease transmission, high-quality data coupled with the skilled interpretation of epidemiologists, climate scientists and meteorologists is required.

The study is partially funded by a grant/cooperative agreement from the National Oceanic and Atmospheric Administration and by a grant from Google.org.

1 Kenya Meteorological Department
2 International Research Institute for Climate and Society, The Earth Institute at Columbia University, USA
This article is adapted from a full report of the study, Raised temperatures over the Kericho tea estates: Revisiting the climate in the East African highlands malaria debate, published in Malaria Journal 2011, 10:12, at