Weather and Climate Forecasting: Chronicle of a Revolution 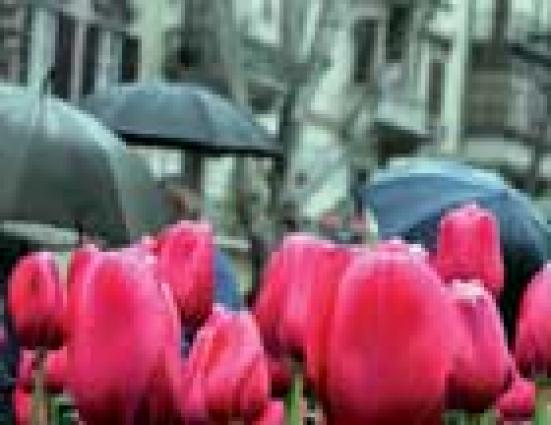 Weather and Climate Forecasting: Chronicle of a Revolution

Today people know sooner whether to carry an umbrella for a rainy day, thanks to a revolution in weather and climate forecasting.

Remarkable advances in weather forecasts during the past half-century have brought great benefits to humanity. Accurate forecasts save many lives, and early warnings mitigate the worst effects of extreme weather events, when they are available. Detailed, accurate forecasts are of huge economic value, with numerous studies showing that the benefits of forecasts outweigh the costs many times over.

Advances in climate modelling over the past fifty years have also been outstanding. General circulation models have been developed and applied to examine the factors causing changes in our climate, and their likely timing and severity.

When the European Centre for Medium-Range Weather Forecasts was established in 1976, forecast skill ten days ahead was little more than a dream. The centre’s stated goal was to produce weather forecasts in the range of four to ten days. In February 2010, the “ten-day barrier” became reality.

The birth of scientific forecasting

The study of thermodynamics – which took a great leap in the nineteenth century – completed the set of fundamental principles governing the flow of the atmosphere. By about 1890, the great American meteor­ologist Cleveland Abbe recognized that meteorology is simply the application of hydrodynamics and thermodynamics to the atmosphere.

Shortly afterwards, the Norwegian scientist Vilhelm Bjerknes analysed weather more explicitly with a two-step plan. In the diagnostic step, the initial state of the atmosphere is determined using observations; in the prognostic step, the laws of motion are used to calculate how this state changes over time. Bjerknes saw no possibility to put his ideas to practical use.

The English scientist Lewis Fry Richardson was bolder. Richardson’s forecasting amounts to implementation of Bjerknes’ prognostic step. As Richardson observed, his scheme is complicated because the atmosphere is complicated. It involved a phenomenal volume of numerical computation, quite impractical in the pre-computer era. But Richardson was undaunted. “Perhaps some day in the dim future it will be possible to advance the computations faster than the weather advances… But that is a dream,” he said in 1922. Today, forecasts are prepared routinely on powerful computers running algorithms remarkably similar to Richardson’s scheme. His dream has indeed come true.

While Richardson’s dream appeared unrealizable at the time his book was published, key developments in the ensuing decades set the scene for progress.

Profound developments in the theory of meteorology provided crucial understanding of atmospheric dynamics. Advances in numerical analysis enabled the design of stable algorithms. The invention of the radiosonde, and its introduction in a global network, meant that timely observations of the atmosphere in three dimensions were becoming available. Finally, the computer provided a means of attacking the enormous computational task involved in weather forecasting.

In the mid-1930s, John von Neumann became interested in turbulent fluid flows. Von Neumann knew of Richardson’s pioneering work, and saw that progress in hydrodynamics would accelerate if a means were available of solving complex equations. It was clear that very fast automatic computing machinery was required. Von Neumann recognized weather forecasting – a problem of great practical significance and intrinsic scientific interest – as an ideal problem for a computer.

Von Neumann discussed the prospects for numerical weather forecasting with Carl Gustaf Rossby, who arranged for Jule Charney to participate in a weather prediction project. Charney directed the Princeton Project (USA) for eight years, and led the team who performed the first computer weather forecasts.

Computers, motor of the forecasting revolution

Arrangements were made to run the integration on the only computer then available, the Electronic Numerical Integrator and Computer (ENIAC) in the late 1940s. The ENIAC integrations were truly ground-breaking; indeed, weather forecasting had been regarded as a Grand Challenge problem throughout the history of computing. Four 24-hour forecasts were made. Each 24-hour integration took about 24 hours of computation – that is, the team was just able to keep pace with the weather.

The ENIAC forecasts were made using a highly simplified model. In the ensuing years, several more sophisticated and realistic models were developed.

The impact of climate change is of enormous importance for our future, and global climate models are the best means we have of anticipating likely changes.

Norman Phillips (Princeton University, USA) carried out the first long-range simulation of the general circulation of the atmosphere in 1956, for about a month.

Following Phillips’ seminal work, several models were developed. Solar heating, terrestrial radiation, convection and small-scale turbulence and other processes are now included in these models. Modern models include the oceans, ice and land processes. The EC-Earth model, being developed by a community of European scientists, has the Integrated Forecast System as its base. It is used to provide state-of-the-art computer simulations of the Earth’s past, present, and future climate states.

Comprehensive atmospheric models are among the finest achievements of meteorology in the twentieth century. These models are constantly refined and extended, and are ever more sophisticated and comprehensive. They simulate the atmosphere and oceans as well as geophysical, chemical and biological processes and feedbacks. The models, now called Earth System Models, are applied to weather prediction and also to the study of climate variability and humankind’s impact on it.

It is no exaggeration to describe the advances made over the past half century as revolutionary. Thanks to this work, meteorology is now firmly established as a quantitative science, and its value and validity are demonstrated daily by the acid test of any science, its ability to predict the future.

Operational forecasting today uses guidance from a wide range of models. In most centres, a combination of global and local models is used. By way of illustration, consider the global model of the European Centre for Medium-Range Weather Forecasts. The centre aims to deliver weather forecasts of increasingly high quality and scope from a few days to a few seasons ahead. Operational since 1979, the centre continues to develop forecasts and other products of steadily increasing accuracy and value, maintaining its position as a world leader.

The rise of ensemble forecasting

The chaotic nature of the atmospheric flow is now well understood. It imposes a limit on predictability – unavoidable errors in the initial state grow rapidly, and render the forecast useless after some days. The most successful means to overcome this obstacle is to run a series, or ensemble, of forecasts, each starting from a slightly different initial state. To allow for uncertainty, the physics parameters of the forecast model are also perturbed at random. The combined result is used to deduce future changes in the atmosphere.

Since the early 1990s, ensemble forecasting has been operational at both the European Centre for Medium-Range Weather Forecasts and at the National Centers for Environmental Prediction in Washington. At ECMWF they perform an ensemble of 51 forecasts, each having a resolution half that of the deterministic forecast.

Probability forecasts have emerged as the key guide for medium-range prediction. They are generated and disseminated for use in operational centres. The European Centre, for example, prepares seasonal forecasts, with a range of six months. They are made using a coupled atmosphere-ocean model, and a large number of forecasts are combined in an ensemble each month.

These ensemble forecasts have demonstrable skill for tropical regions. Recent predictions of the onset of El Niño and La Niña events have been impressive. However, in temperate latitudes, and in particular for the European region, no significant skill has yet been achieved. Indeed, seasonal forecasting for middle latitudes is one of the great problems facing us today.

Timely warning of weather extremes may be the most important application. Many lives can be saved and property losses averted through these warnings. Transportation, energy consumption, construction, tourism and agriculture sectors, all sensitive to weather conditions, are increasing their demand for accuracy and detail of short range forecasts, as decisions with heavy financial implications must continually be made.

The marine community also uses numerical weather prediction. Predicted winds are used to drive wave models, which estimate sea and swell heights and periods. Forecast charts of the sea-state, and other specialized products can be automatically produced and distributed to users.

Aviation benefits significantly from numerical weather prediction guidance, with warnings of hazards such as lightning, icing and clear air turbulence. Many airports can be serviced from a central forecasting facility based on automatic generation of terminal aerodrome forecasts.

Computers have enabled a revolutionary leap in forecasting. The eminent Norwegian meteorologist Sverre Petterssen noted that, prior to the computer, advances occurred in homeopathic doses.

Yet formidable challenges remain. Sudden weather changes and extremes cause much human hardship and damage to property. These rapid developments have fast and slow time scales, with intricate interactions between dynamic processes and physical parameters. Computing these complex interactions is a significant challenge.

Nowcasting is the process of predicting changes over periods of a few hours. Guidance from current numerical models can fall short of what is needed to take effective action to avert disasters. For now, the best results systematically combine numerical weather prediction products with conventional observations, radar imagery, satellite imagery and other data. But much remains to be done to develop optimal nowcasting systems, and we can be optimistic that future developments will lead to great improvements in this area.

At the opposite end of the time scale, the atmosphere’s chaotic nature puts a limit on what standard forecasts can achieve. While the ensemble prediction technique provides probabilistic guidance, so far it has proved difficult to use in many cases. Interaction between the atmosphere and the ocean becomes a dominant factor at longer forecast ranges. Although there is good progress in seasonal forecasting for the tropics, useful long-range forecasts for temperate regions remain to be tackled by future modellers. Another great challenge is the modelling and prediction of climate change, a matter of increasing importance and concern.

Developments in atmospheric dynamics, instrumentation and observing practice and digital computing have made the dreams of Bjerknes and Richardson an everyday reality. Numerical weather prediction models are now at the centre of operational forecasting. Forecast accuracy has grown apace, and progress continues on several fronts.