Hydrology in the WMO mandate 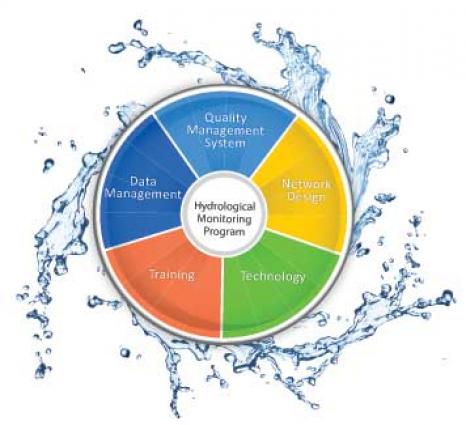 Hydrology in the WMO mandate

“[WMO] is providing critical hydrological services and helping its members to establish and maintain systems for acquiring and disseminating timely and reliable weather, climate, and water- related data. Equipped with such information and forecast, countries are able to formulate and implement smart water policies, prevent and resolve water-related disputes, and respond to threats of floods and droughts. I appeal to all of you to ensure that WMO is inspired and empowered to make the maximum impact on the global water agenda; for its members, and with its members.”  - Opening remarks by the late Mr Kofi Annan, at the 70th Session of the WMO Executive Council – Special Dialogue on Water.

Striving to remain fit-for-purpose and become increasingly nimble and cost-effective, WMO has embarked in a major reform exercise of its governing structure. The WMO Constituent Bodies reform (WMO reform) aims at improving the coordination of observation and data management, the standardization of observations and measurements, and the provision of services for decision-making and socioeconomic benefits. It also offers the best opportunity to expand hydrological data, information and services provision and better respond to users’ demands. It will provide a more solid home to hydrology within an integrated earth-system approach, bringing hydrological, meteorological and climatological expertise together, to contribute to water resources management, multi-hazards early warning systems, climate change impacts mitigation, sustainable urban development and food security.

Since the onset of the reform debate, it was recognized that operational hydrology as a discipline is an integral part of WMO mandate, and that synergies and coordination with WMO meteorological and climatological activities need to be strengthened. Hence, WMO is needed to find ways to enable the hydrological community to bring its requirements, expectations and programmes into the strategic discussions shaping the Organizations plans of action.

The first step in this reflection has been the convening, together with other United Nations agencies and international partners, of the Global Conference on Prosperity through Hydrological Services (7-9 May 2018) that gathered 219 participants from 85 countries and 34 organizations. In its final statement, the Conference stressed the importance of fora for intergovernmental cooperation in operational hydrology to support Member States and Territories in providing hydrological data, products and services, and recommended strengthening hydrological representation in WMO Constituent Bodies.

The Seventieth session of the Executive Council (EC-70) in June 2018 hosted a Special Dialogue on Water, which recommended

i) to support and expand the operation of observational hydrological networks
ii) to promote hydrological data exchange
iii) to better understand and define what is required in terms of hydrological services to support decision-making.

In this context, it recognized the necessity  to maintain and strengthen the traditional engagement of National Hydrological Services with WMO and the representation of hydrologists in the governance of WMO.

On the basis of these considerations, EC-70 decided to convene an extraordinary session of CHy (CHy-Ext) to lay out the path forward with regard to the major WMO developments in hydrology and to propose the necessary organizational arrangements. EC-70 also established a Task Force on Water to develop recommendations to the Congress regarding the WMO vision and strategy for the future effective and fit-for-purpose hydrological services delivery.

The Task Force elaborated a document assessing the relevance of hydrology in WMO with respect to global frameworks such as the 2030 Agenda for Sustainable Development (especially SDG 6 “Water and Sanitation”), the Paris Agreement on climate change, the Sendai Framework for Disaster Risk Reduction and the UNECE Water Convention. The document identifies the following eight ambitions, subsequently revised and adopted by CHy-Ext (Rec 1 (CHy-Ext)), on which to build future WMO strategic plans:

CHy-Ext (February 2019) suggested to prepare a Declaration, consistent with the roles and responsibilities of WMO, that reinforces the importance of operational hydrology and hydrological services in addressing global water challenges, to be discussed by the Extraordinary session of Congress in 2021. Also, CHy-Ext tasked Regional Associations and their Hydrological Working Groups with preparing Plans of Action, to be presented to the Extraordinary Session of Congress in 2021, to strengthen operational hydrological services and the ability of national service providers to support better water resources decision-making and to address the above-mentioned ambitions.

Furthermore, CHy-Ext suggested a number of criteria ((Rec 2 (CHy-Ext)) to Congress in view of integrating hydrological activities into the new WMO structure. These include inter alia an adequate and appropriate representation and participation of hydrologists in all constituent bodies of WMO, a coordination function of operational hydrological activities along the value chain as well as across relevant scales, and the integration of hydrology with the other Earth-system sciences in all relevant WMO structures and activities. These considerations were echoed by WMO President Mr Grimes in his opening speech, where he stressed that water resources are key to ensure a sustainable future and that there is a need for a more visible role and a stronger voice within WMO for the hydrological community.

The main hydrology-related Cg-18 document is Doc 5.3(1) “Vision, Strategy and Organizational Arrangements for Hydrology and Water Resources in WMO”, which addresses the requirements for adequate and appropriate representation and participation of hydrologists in all constituent bodies of WMO.

It notably proposes, through amendments to the general regulations, that in each session a Hydrological Assembly shall be convened attended as a rule by the Hydrological Advisors of Members and by other representatives designated by Members. Guided by the WMO strategic plan, the Assembly will mobilize the hydrological community to participate in WMO work, integrate hydrology in the Organization’s work programme and advise the governing bodies on water-related issues and global challenges.

To strengthen WMO’s position  in the global water scene, it also proposes that the Hydrological Advisor shall be appointed by each Member, in consultation with the Permanent Representative.

Doc 5.3(1) also proposes to establish a Hydrological Coordination Panel that provides the practical mechanism for WMO to ensure an integrated delivery of water-related activities, by interacting with Executive Council's new Technical Coordination Committee, Regional Associations, both Technical Commissions and their subsidiary bodies. Its Terms of Reference are presented in Doc. 3.2 (EC-71).

Finally, it requests  Executive Council to follow up on the preparation of an Action Plan and a draft Declaration to be submitted to the Extraordinary Congress in 2021, as suggested by CHy-Ext. The outlines of these two documents will be presented during the Hydrological Assembly.

Doc. 5.3(2) “Major Hydrological Initiatives” identifies the ongoing activities and initiatives that are crucial for the successful implementation of the WMO Vision and Strategy for hydrology, notably:

These proposals and suggestions represent the outcome of in-depth debates within the WMO community and beyond, involving external partners and stakeholders such as UN agencies and scientific associations. The proposals have been reviewed by SOP, and are now put forward to  Congress for consideration. As a key feature for the successful implementation of the reform, hydrology will help increase the integrated delivery capacity of Members. It also broadly strengthens WMO’s role and capacity to deliver hydrological data, information and services in support of  sustainable development, mitigation and adaptation to climate change and future global stocktake for water.