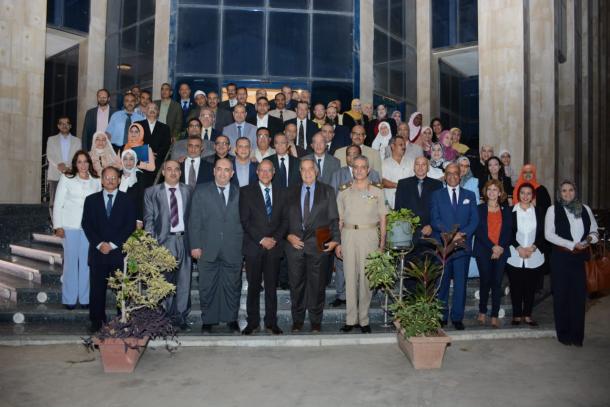 Egypt celebrated Arab Meteorological Day on 18 October with the theme of Climate services in Arab States. The celebration was held under the patronage and support of the Minister of Civil Aviation - Younes El Masry, headed by Dr. Ahmed Abd El-Aal, Chairman of the Egyptian Meteorological Authority, and Chairman of the Permanent Arab Meteorological Committee of the League of Arab States, and several leaders of the Ministry of Civil Aviation, which is responsible for meteorology in Egypt.

During the celebration participants expressed concerns that climate variability and change have been causing significant impacts to the whole world and that no country has immunity against this challenge! Furthermore, no country alone can cope with the challenges caused due to climate change impacts. Despite the efforts to overcome poverty and drive economic growth, developing countries are among the most vulnerable to weather and climate hazards, which are becoming more frequent and severe due to climate change, as the climatic risks erode the gains achieved and undermine the prospects for the development process.

Coping with the challenges posed by climate variability and change requires creativity and cooperation, and we must act now! Because what we will do today, will determine the climate of tomorrow! Especially, since most of the research results show that climate change impacts will intensify over the next decades, and the Arab countries will witness more severe climate induced hazards that did not happen before!

And now, the population of Arab countries is increasingly affected by extreme weather and climate events, such as severe heat waves, drought, severe floods the effects of climate change, so the Arab countries should take the necessary measures to provide high quality and reliable climate services in support of decision and policy making. The partnership between the NMHSs, governmental institutions and private sector in Arab countries will facilitate provision of further improved climate services.

During the celebration the Egyptian Meteorological Authority was solemnly granted quality certificates, in recognition of  implementing international quality standards

The signing of a Memorandum of Understanding took place between the Egyptian Meteorological Authority and a number of qualified companies that were awarded quality certificates.

Further more, a number of distinguished employees of the Meteorological Authority were awarded by Certificates of Appreciation for their valuable contributions on provision of high quality services in the area of their expertise.