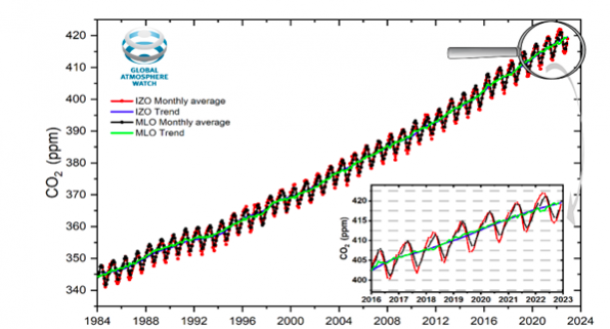 The ongoing volcanic eruption at Mauna Loa in Hawaii has caused the Mauna Loa Observatory (MLO) data series to be temporarily interrupted since November 29. But this does not mean that atmospheric CO2 monitoring has not been interrupted.

On a global scale, more than a hundred stations currently measure CO2 in sites representative of very different environmental conditions and climates, contributing to the Global Atmosphere Watch (GAW) Program of the World Meteorological Organization (WMO).   Moreover, Europe manages the Integrated Carbon Observation System (ICOS) research infrastructure whose network of 150 stations monitor CO2 and other gases in the atmosphere, oceans and major ecosystems.

The Mauna Loa Observatory (MLO) holds the world's longest record of surface atmospheric carbon dioxide (CO2) measurements. In March 1958, C. David Keeling of the Scripps Institution of Oceanography (https://scripps.ucsd.edu/) implemented the CO2 observing program at a National Oceanic and Atmospheric Administration (NOAA) facility [1]. In May 1974, NOAA started its own CO2 measurement program and since then both observing programs have been operating in parallel [2,3]. The graph that shows the evolution of the CO2 concentration in MLO since 1958 is known as the Keeling curve.

In fact, the German researchers who, a decade earlier, had proposed Izaña as a station for the Background Atmospheric Pollution Monitoring Network (BAPMoN) referred to Izaña as the “European Mauna-Loa”. IZO has contributed to the Global Atmosphere Watch (GAW) Program of the World Meteorological Organization (WMO) since 1989, the year this network was created, but also to the NOAA CO2 database (ObsPack CO2 Data).