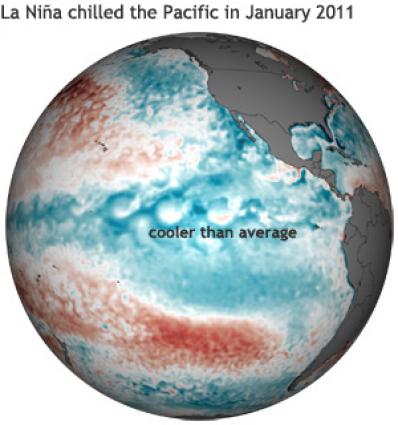 New NOAA-led report examines climate conditions experienced around the world. The lead character of the 2011 climate story was a double dip La Niña, which chilled the Pacific at the start and end of the year. Many of the 2011 seasonal climate patterns around the world were consistent with common side effects of La Niña.

Worldwide, 2011 was the coolest year on record since 2008, yet temperatures remained above the 30 year average, according to the 2011 State of the Climate report released online today by NOAA. The peer-reviewed report, issued in coordination with the American Meteorological Society (AMS), was compiled by 378 scientists from 48 countries around the world. It provides a detailed update on global climate indicators, notable weather events and other data collected by environmental monitoring stations and instruments on land, sea, ice and sky. >> More