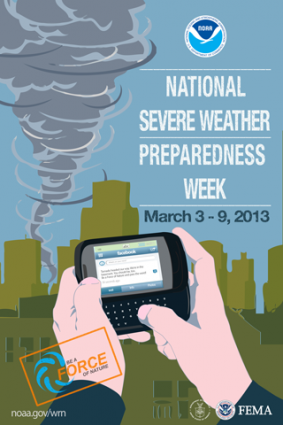 Know your risk. Take action. Be an example.

Be a Force of Nature this year with National Severe Weather Preparedness Week, March 3-9, 2013.

During this week, NOAA and FEMA are highlighting the importance of planning and practicing how and where to take shelter before severe weather strikes. Being prepared to act quickly can be a matter of life and death.

Being a force of nature goes beyond taking appropriate preparedness action. It’s about inspiring others to do the same. We’re asking people not only to be prepared, but also to encourage their social network to act by texting, tweeting, or posting a Facebook status update. >> More