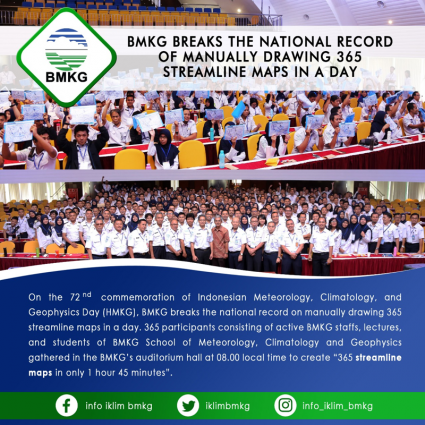 As a part of activities to commemorate the 72nd Indonesian Meteorology, Climatology and Geophysics Day (HMKG), BMKG has organized a unique, educational, and creative activity to create 365 streamline maps in only 1 hour 45 minutes involving 365 participants consisting of BMKG staff who are still active, lecturers, and students of BMKG School of Meteorology.

This activity is intended to be registered at the Indonesian Record Museum as a record of “creating the highest number streamline maps carried out at the same time”, which has never been done in Indonesia.

For "meteorologists ", knowing the general circulation of wind at regional scale is crucial to predict the movement of air masses, cloud formation, and area with high probability of potential tropical cyclone to form.

The participants actually no longer manually draw the streamline in their routine jobs. Instead, they use digital application in this modern era. Thus, this breaking record activity provides a moment of nostalgia for weather forecaster to re-memorize the fun time in creating streamline map.

By this activity, BMKG wants to appreciate their weather forecasters who continuously analyse the streamline map, day by day and this analysis process has been carried out for 72 years since BMKG has begun.