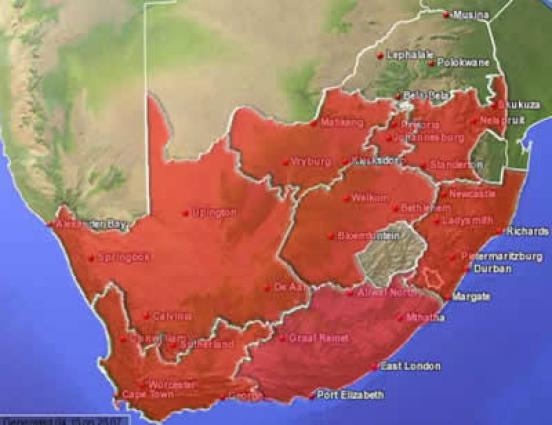 The South African Weather Service is continuing to monitor the weather system that is expected to cause a range of extreme weather conditions over the majority of South Africa as from today, Monday, 6 August 2012 onwards.
The areas most likely to be affected are as follows: Western Cape, Eastern Cape, Northern Cape, KwaZulu-Natal, Free State, Mpumalanga and Gauteng as well as the southern parts of North West province. In other words, the only province not to be directly affected by these extreme winter conditions will be Limpopo province.

The cause of the above-mentioned extreme weather conditions will be the combination of a well-defined cut-off low pressure system (located in the upper regions of the atmosphere), interacting with a cold frontal system. An additional feature associated with this weather pattern, is the presence of a strong surface high (also known as an anticyclone) that will be ridging very strongly overland, immediately following the passage of the cold front. This process of surface ridging is expected to advect (i.e. move horizontally) very cold air from our sub-Antarctic southern ocean areas. Daytime temperatures for South Africa are thus likely to drop significantly over the majority of the interior between today and tomorrow, with many areas likely to experience daytime maximums of only 10˚C (or even less!) by tomorrow. >> More