The weather in Poland was affected by a vast low pressure system in May and at the beginning of June. Heavy rain developed in the south with rain amount significantly exceeding monthly precipitation rate. There were two such rain ‘waves’. The first one occurred on 15-17 May and the second one on 1-3 June.

Rapid flooding which occurred in southern Poland endangered lives and caused considerable damage in a number of areas. The aftermath of severe flooding characterised in water discharge, flood embankment failures, flooding, damaged bridges and other elements of infrastructure. Flooding threat moved towards the major rivers in northern Poland in the third decade of May. Huge waves on the Vistula and Odra rivers caused rapid increase in the discharge section line, exceeded ever recorded historic maxima in a number of places and rose above alert levels. Flood embankments were destroyed due to water pressure and caused flooding in the secured areas. A number of cities were damaged, several thousand people were forced to evacuate.

The second rapid rain wave hit on 1-3/06/2010 – the precipitation sum on the Upper Vistula basin was higher than 100mm. The drainage basins on the Vistula river and partly on Odra were once again affected by heavy rain. Although, the precipitation sum was lower than in May the mountainous tributaries rose past the alert level due to the drainage basins being absorbed with water. Overbank stage which developed on the Vistula river was at times greater than the one which occurred in May. Flooding and embankment damage were once again recorded.

The second Odra river wave is lower than the one which developed in May. Though, it still rises above the alert level. The water stage was also greatly affected by the Odra drainage basin on the territory of the Czech Republic.

At the moment the wave is passing through Warsaw. The Odra wave is above the Warta river mouth. 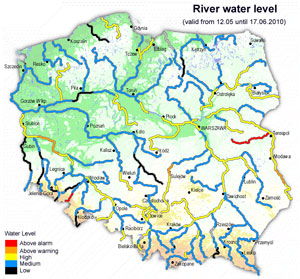 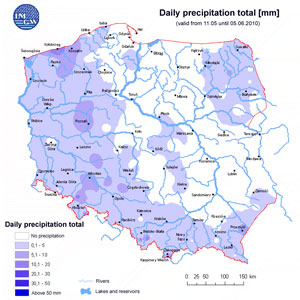 Areas along the Odra river:

The media are welcome to make this report available to the public by giving credit to the IMGW as an information source.