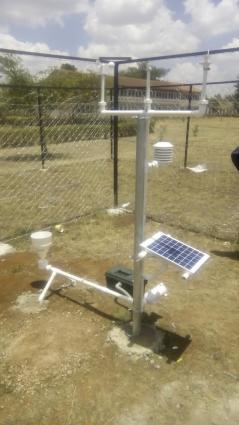 Paul A. Kucera and Martin Steinson

In many regions of the World, surface weather stations are sparsely located and/or of poor quality.  Existing stations have often been sited incorrectly, not well maintained, and have limited communications established at the site for real-time monitoring.  The University Corporation for Atmospheric Research (UCAR) and US National Weather Service (NWS) International Activities Office (IAO) with support from USAID Office of U.S. Foreign Disaster Assistance (OFDA) has started an initiative called 3D-PAWS (3D-Printed Automatic Weather Station) to expand observation networks in sparsely observed regions of the world.

The 3D-PAWS effort involves the development and deployment of low-cost surface weather stations utilizing 3D printer technology.  A very high quality surface weather station can be manufactured in about a week, at a cost of $300-500, using locally sourced materials, microsensor technology, low-cost single board computers, and a 3D printer.  Deployment of 3D-PAWS systems consists of installing a station and providing a 3D printer and training to manufacture additional stations.

The goal of the project is to make the 3D-PAWS weather station designs, software, and processing tools an open community resource.  The weather stations can be built locally by agencies, through educational institutions, and residential communities as a citizen effort to augment existing networks to improve detection of natural hazards for disaster risk reduction.

The 3D-PAWS has been integrated with GLOBE (Global Learning and Observations to Benefit the Environment: http://www.globe.gov).  GLOBE is an international science and education program that provides students and the public worldwide with the opportunity to participate in data collection and the scientific process, and contribute meaningfully to our understanding of the Earth system and global environment. To date, 117 countries have participated in The GLOBE Program.

The initial 3D-PAWS and GLOBE pilot program has focused on training to fabricate the stations locally and install the stations at schools in Kenya.  At the beginning of April 2017, seven 3D-PAWS station have been installed at local schools.  The project has reached a successful milestone.  The first-ever locally made and installed 3D-PAWS station is now operational at Moi Forces Academy, Nairboi, Kenya. The station was installed by 3D-PAWS colleagues, Charles Mwangi (Kenya Deputy Coordinator for GLOBE Program; Kenya Ministry of Defense) and Andrew Nyawade (Kenya Ministry of Defense).  They plan to install an additional 10 stations at schools in the near future.

The project has also partnered with the Kenya Meteorological Department (KMD).  One 3D-PAWS station has been installed at KMD Met Garden for testing and evaluation with other commercial sensors.  The future plan is to provide 3D-PAWS training at KMD in an effort to expand their regional observation capability.

3D-PAWS data are available in real-time on the project data server: http://3d-kenya.chordsrt.com.  CHORDS (Cloud-Hosted Real-time Data Services for Geosciences) program is a US National Science Foundation (NSF) Earthcube initiative to provide a platform to make geosciences datasets available to the community.  CHORDS is supported and managed the UCAR/National Center for Atmospheric Research (NCAR) Earth Observing Laboratory.

3D-PAWS stations systems have been deployed in the United States (3), Kenya (7), Zambia (5), Barbados (1), and Curacao (1).  The effort is focused on least-developed, data sparse regions around the World in an effort to improve real-time monitoring in an effort to reduce societal risks due to high impact weather.