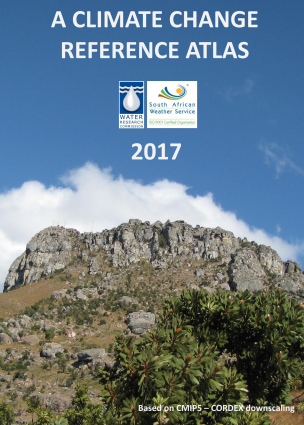 “Creating an accessible climate basis for national and local scale climate change impact, adaptation and response planning”
The South African Weather Service (SAWS) has developed and released a new CLIMATE CHANGE REFERENCE ATLAS for South Africa on 29 March 2017. This forms part of our World Meteorological Month celebrations as well as the organisation’s vision to create a WeatherSMART nation

The South African Weather Service (SAWS) has developed and released a new CLIMATE CHANGE REFERENCE ATLAS for South Africa on 29 March 2017. This forms part of our World Meteorological Month celebrations as well as the organisation’s vision to create a WeatherSMART nation.

With climate change becoming a greater reality, National Government, provinces, municipalities and even Non-Governmental Organisations (NGOs) are increasingly involved instrategic initiatives to adapt and respond to the risks posed by global warming. General assumptions about global warming are frequently made - for example, it is generally assumed that global warming will lead to an increase in heat waves, floods and dry periods, regardless of the area of interest. These assumptions originate from a generalisation of scientific findings, which are published in sophisticated scientific papers and technical reports, and which are not always addressed to the general public. In reality, projected climate responses to global warming differ from location to location, and changes in the level of confidence in these projections between different geographical locations and climate variables occur.

Furthermore, future climate change cannot be separated from trends and variations in the historical climate, meaning that any climate change study or report needs to contain an analysis of the historical climate. Observed local-scale climate trends can already be calculated from observation points, in some places as far back as the start of the industrial revolution and the onset anthropogenic global warming. It is therefore important to realize that climate change not only deals with climate projections, but that climate change consists of a continuous record of variable weather patterns extending from the past into the future.

From this background, SAWS, with its wide network of observations as well as its vision of creating a WeatherSMART nation, has decided to develop an easily accessible, visual, interactive and living Climate Change Reference Atlas. The first version of the atlas contains climate change projection results that have been produced during a recently completed Water Research Commission (WRC) funded project on “Projected future climate change impacts on flood and drought hazards in South Africa”. The atlas contains 140 spatial South African maps of average and extreme rainfall and nearsurface temperature climate change projections as well as indications of confidence in each projection map. South African province border lines are indicated on these maps, meaning that the projections could also be of value on the provincial and local levels. It is envisaged that the atlas will grow to include scientific findings based on historical climate trends, with more detail on local-scale frequency changes in both historical and projected climates, especially as far as extreme weather events are concerned. Reliable climate records from SAWS will also be used in climate change downscaling initiatives which will be of great value to users.

With the CLIMATE CHANGE REFERENCE ATLAS, SAWS has established a product aimed at providing a climate service to future climate change impact, adaptation and response planning. This is aimed at fulfilling the SAWS vision of creating a WeatherSMART nation. It is believed that the atlas will contribute significantly to national and local efforts to reduce the risks posed by global warming, such as the Climate Change Response Policy and the development of the National Adaptation Plan (NAP) by the Department of Environmental Affairs (DEA), meaning that the atlas will contribute in creating a weather and climate resilient society in South Africa.

The atlas is available on the SAWS website weathersa.co.za, at the link http://www.weathersa.co.za/climate/climate-change-reference-atlas and will also be made available to the South African Risk and Vulnerability Atlas (SARVA).