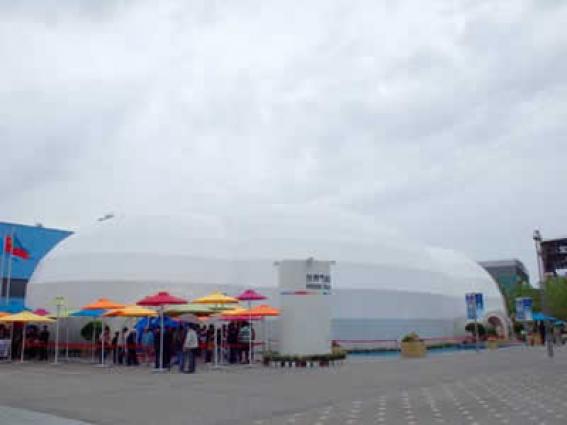 “MeteoWorld” on the theme “for the safety and well-being of the people” is operated by the World Meteorological Organization (WMO) and China Meteorological Administration (CMA), in partnership with the Intergovernmental Panel on Climate Change, the Group on Earth Observations, the European Organization for the Exploitation of Meteorological Satellites, and the Association of Hydro-Meteorological Equipment. The pavilion covers 1 500 m2 and has the form of a white cloud with surrounding mist. Visitors are able to see a rainbow when the angle of the sunshine is below 42 degrees, as well as simulations of climatic extremes. “MeteoWorld” is adjacent to the United Nations pavilion, in which WMO participates as the UN Specialized Agency for meteorology (weather and climate), operational hydrology and related geophysical sciences.

The future version of the World Weather Information Service (WWIS) Website of the World Meteorological Organization (WMO) is showcased in the “MeteoWorld” Pavilion at the Shanghai World Expo 2010 that runs from May to October 2010.

This brand-new version of WWIS is Google Earth enabled. It allows users to freely move around a virtual globe by changing the viewing angle and position, and has the additional capability of representing many different views such as geographical and man-made features on the surface of the Earth. It features a versatile "fly-over" function to any part of the world and a quick search function. This revamped version of WWIS will therefore provide users with more intuitive and flexible access to the official weather forecasts for more than 1 300 cities around the world.

The WWIS Internet website (http://worldweather.wmo.int/) was established in 2000 to provide authoritative and reliable weather information of National Meteorological and Hydrological Services (NMHSs) around the world to all Internet users.  In 2008, WWIS won the prestigious Stockholm Challenge Award in the Environment Category.  The Stockholm Challenge is a major international IT competition and some IT people label it as the Oscar Award for the IT sector. The Secretry-General of WMO Michel Jarraud said, “The new version of WWIS has strengthened our capability to serve the users even better through a modernized website that is attractive and allows easy access to information and forecasts through an easy to use Google application2. He thanked Hong Kong China for coordinating and maintaining WWIS on behalf of WMO.

“On behalf of the World Meteorological Organization, I pay tribute to the People’s Republic of China and to the China Meteorological Administration for generating this first-ever opportunity in history to reach such a large audience and to educate so many people about science that impacts their daily life.

Whatever achievement is made in the science of meteorology and hydrology serves a purpose only if the outputs benefit the people. MeteoWorld is unprecedented as a pavilion for enhancing awareness of the public on the benefits they can draw from the work of meteorologists working together beyond political borders across the world.”

“MeteoWorld is a new symbol of international cooperation. This partnership goes beyond the World Meteorological Organization and the China Meteorological Administration, to include the broader meteorological, hydrological and climate community including the WMO co-sponsored Intergovernmental Panel on Climate Change, partners such as the Group on Earth Observations, the European Organization for the Exploitation of Meteorological Satellites, the Association of Hydro-Meteorological Equipment Industry and many others working together with the same objective which is to protect people and to improve their quality of life. The continued improvement of weather forecasts and early warning systems is a priority for WMO and its Members. Today, we are in a country and a city that have played a pioneering role in this respect: the Shanghai Early Warning System is a pilot model for others.

WMO and its Members are grateful to the People’s Republic of China and to the China Meteorological Administration for MeteoWorld. Among the visitors will be civil society, high-level representatives of the world meteorological community, as well as Senior Officials of the United Nations system and other international and regional institutions. More importantly, the pavilion will receive thousands of citizens and non-technical visitors who will have an opportunity to better understand the products and services they can access from National Meteorological and Hydrological Service of their countries. “