News from the MeteoWorld pavillion 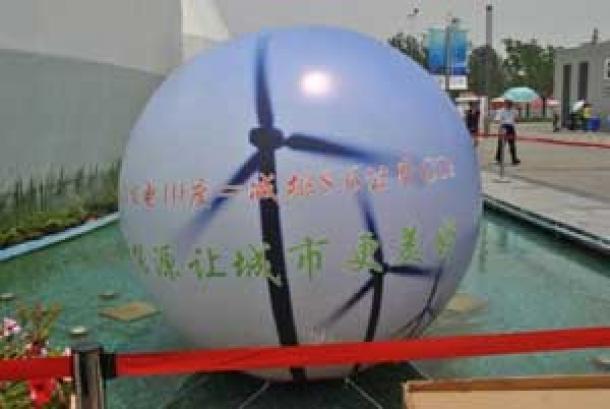 News from the MeteoWorld pavillion

During the exhibition, MeteoWorld organizes a different theme activity each month from June to October 2010, focusing on metrological observations, weather forecasting, service delivery and exploitation and utilization of climate resources respectively. Correspondingly, the exhibits on the related topics will be shown in the MeteoWorld. On the theme day of each month since June, the interactions between meteorologists and public will be increased.

On 20 June, the theme day activity was held in the MeteoWorld focusing on new energy and low carbon life, which was organized by the National Climate Center of China Meteorological Administration (CMA), having attracted many people on the theme day on “Renewable Energies, Better Cities”.

During the day, visitors joined in such activities as gift-giving Q&A, wind force game, and saw a wind turbine model, and wind power distribution in China

It was reported that the activity would last till June 30. The organizer also called the public to contribute their works on the theme to be selected for exhibits in the pavilion. 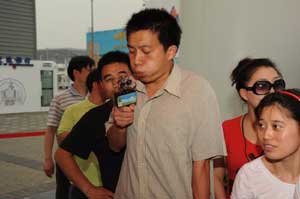 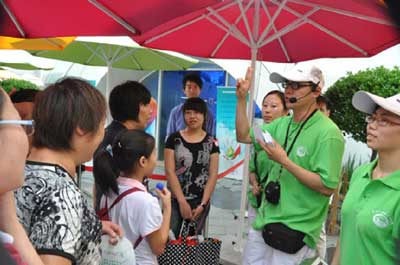 On 17 July, the second theme day activities focusing on “City Life and Meteorological Risks” was launched in MeteoWorld Pavilion, which were sponsored by Chinese Academy of Meteorological Sciences, these activities were attended by Dr. Yu Rucong, Deputy Administrator of China Meteorological Administration (CMA) and Yan Hong, a Representative from WMO.

Despite of hot weather, more than 5000 visitors came to the Pavilion experiencing the theme day activities. During the activities, visitors could see films outside of the pavilion on meteorological science and risk mitigation in cities and answer prize-giving questions. Some meteorological equipment and models were on display.

Dr. Yu said that the theme day activities were very relevant to the Shanghai Expo, city, and citizens’ life. He added, as always, meteorological service was playing an increasingly important role in the economic and social development, especially in the urban disaster mitigation. 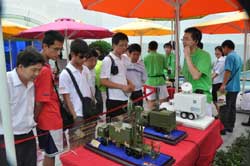 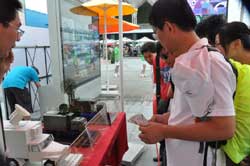 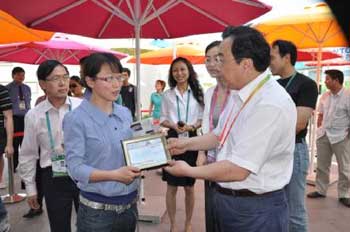 The 100 000th visitor.
The MeteoWorld Pavilion met its 404186th visitor on 2 August. It is reported that the operation and service in MeteoWorld Pavilion has been improved steadily since its opening to public, with its unique design and the exhibits in the pavilion have left a deep impression on its visitors.

The head of the pavilion operating team says that his team will continue to enhance operation and management from scientific prospective and improve the service, especially under the sever weather conditions known for high temperature in Shanghai in order to enhance the capability and efficiency of the pavilion. 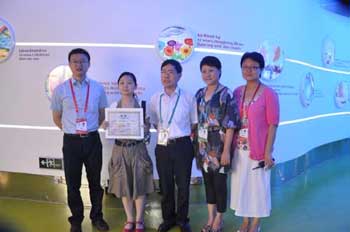 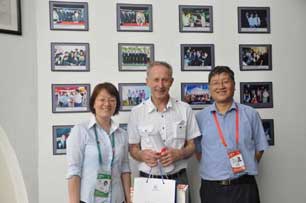 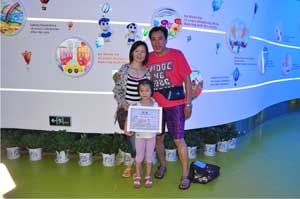 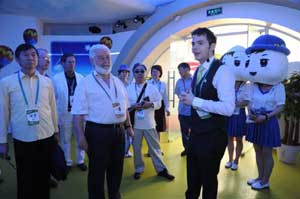 On 7 July, Mr. Vincente Gonzalez Loscertales, Secretary General of the Bureau of International Expositions (BIE), Mr. Lan Feng, Chairman of BIE and Mr. Wu Jianmin Honorary Chairman of BIE among the 9 experts from the World Expo International Selection Committee (ISC) visited the MeteoWorld pavilion. The purpose of the visit was to propose and determine the Urban Best Practices Area (UBPA), exhibition cases, and select the Best Exhibit(s) in the UBPA during the Expo, according to rules set by the organizer of the World Expo 2010 Shanghai China.

Based on some sources, this visit was the firest site view by ISC, and the second selection view will take place in 11-15 October 2010. The criteria for selection will focus on thematic interpretation by spcific pavillions, innovative exhibits and architecture design, the fial selection results will be made public on 30 October.

The 9-member ISC group stayed in MeteoWorld for about 40 min, hearing a detailed presentation at each section of the pavilion. At the Expo Weather Office, the ISC members were very much interested in the personalized heat-stroke index related forecasts and service delivery, among other meteorological operations, and they also enquired about intercations with general public, operating details and security issues, etc.

Mr. Wu Jianmin said, MeteoWorld is very unique, and he would strongly recommend it. At the same time, he also would like to see further efforts in outreach to general public. Mrs. Anna Kajumulo Tibaijuka from Japan mentioned that she worked closely with the Japan Meteorological Agency and she was aware of the meteorology. In her visit to MeteoWorld, she was more deeply impressed by the “one family” spirit of the international meteorological community. Mr. Vincente Gonzalez Loscertales reconfirmed the success of the MeteoWorld as an independent exhibitor, and he said that in the Expo 2012 Yeosu Korea on theme of ”the Living Ocean and Coast: Resource Diversity and Sustainable Development”, which would be closely related to meteorology. Based on the successful experience of MeteoWorld as an independent exhibitor, he would actively supported Korea Meteorological Agency to involve in the Yeosu Expo. 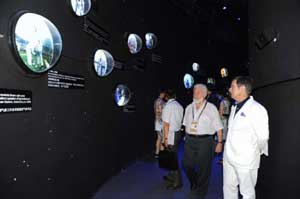 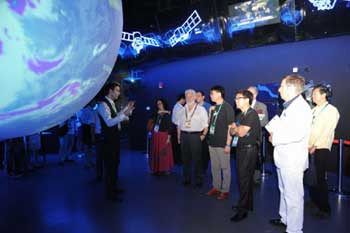 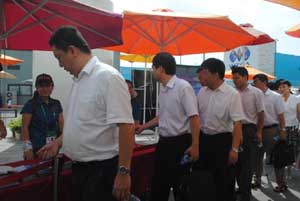 The MeteoWorld Theme Day - “Eyes” on Global Weather opened on 8 August 2010. Dr. Yu Rucong, Deputy Administrator of the China Meteorological Administration (CMA) gave an opening remark. He said that observation was the basis for meteorological predictions, hence the importance of this theme. He also pointed out that the theme of the World Expo Shanghai was “better Cities, better life”, but better and convenient city life needed various supports, especially the meteorological support. A better meteorological service delivery in the future also required more attention to meteorology from all social sectors and communities, he added, each step forward in meteorology was always associated with meteorological observations. Dr. Yu hoped that the theme activity in August would allow visitors to have comprehensive and in-depth understanding of meteorology.

To our knowledge, the activities related to “Eyes” on Global Weather is the 3rd monthly theme launched at MeteoWorld in sequence, and this time they are co-sponsored by the National Satellite Meteorological Centre and the CMA Meteorological Observation Centre. 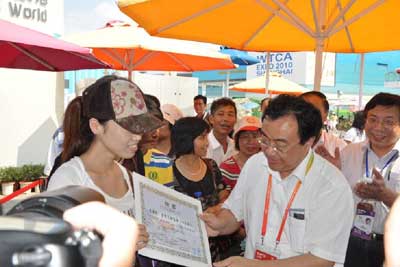 MeteoWorld saw its 500 000th visitor at about 14:00 on 24 August, who was lucky Miss Lu Ping from her city Shanghai, as it happened. Entrusted by the World Meteorological Organization (WMO) and the China Meteorological Administration (CMA), Mr. Tang Xu, General Director of the Shanghai Meteorological Bureau, presented her a memorial certificate and a package of interesting gifts.

Like previous visitors of the MeteoWorld, Miss Lu was escorted in a VIP tour with full narrations in all sections of the pavilion. After her visit, she said, MeteoWorld was small in size, but it was very innovative, so delicate and just splendid.