NOAA: Major flooding on the Mississippi river predicted to cause largest Gulf of Mexico dead zone ever recorded 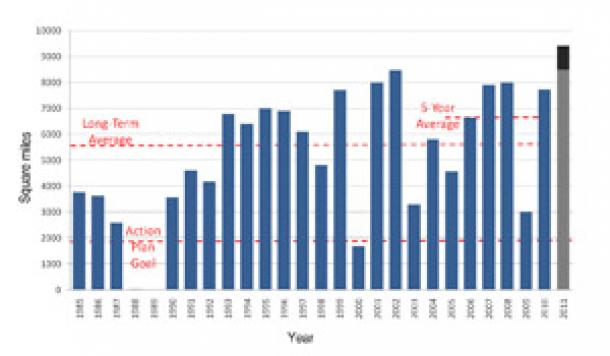 NOAA: Major flooding on the Mississippi river predicted to cause largest Gulf of Mexico dead zone ever recorded

The Gulf of Mexico’s hypoxic zone is predicted to be the largest ever recorded due to extreme flooding of the Mississippi River this spring, according to an annual forecast by a team of NOAA-supported scientists from the Louisiana Universities Marine Consortium, Louisiana State University and the University of Michigan. The forecast is based on Mississippi River nutrient inputs compiled annually by the U.S. Geological Survey (USGS).

Scientists are predicting the area could measure between 8,500 and 9,421 square miles, or an area roughly the size of New Hampshire.  If it does reach those levels it will be the largest since mapping of the Gulf “dead zone” began in 1985. The largest hypoxic zone measured to date occurred in 2002 and encompassed more than 8,400 square miles.