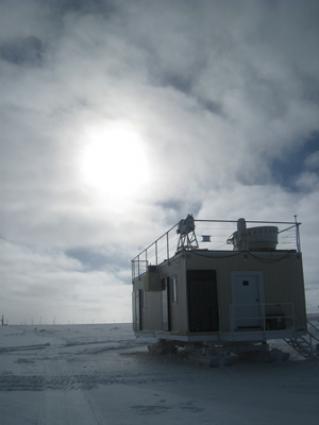 New study shows clouds will be important in region’s future

The ICECAPS Mobile Science Facility at Summit Station against a backdrop of Arctic clouds. ICECAPS is short for Integrated Characterization of Energy, Clouds, Atmospheric state and Precipitation.

Clouds over the central Greenland Ice Sheet last July were “just right” for driving surface temperatures there above the melting point, according to a new study by scientists at NOAA and the Universities of Wisconsin, Idaho and Colorado. The study, published today in Nature, found that thin, low-lying clouds allowed the sun’s energy to pass through and warm the surface of the ice, while at the same time trapping heat near the surface of the ice cap. This combination played a significant role in last summer's record-breaking melt.

“Thicker cloud conditions would not have led to the same amount of surface warming,” said Matthew Shupe, research meteorologist with NOAA’s Cooperative Institute for Research in Environmental Sciences at the University of Colorado and the NOAA Earth System Research Laboratory. “To understand the region’s future, you’ll need to understand its clouds. Our finding has implications for the fate of ice throughout the Arctic.” >> More