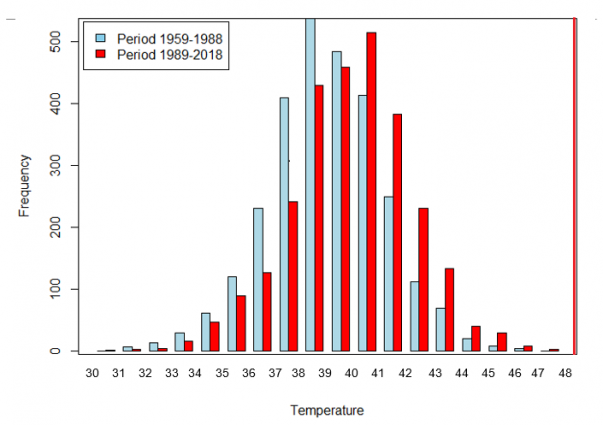 An extreme Sharav occurred in Israel on July 17th. In Sedom (southern Dead Sea) the daily maximum temperature reached an outstanding high of 49.9°C, which is the highest temperature recorded in Israel since June 1942 (On June 21st 1942, 54°C was measured at Tirat Tzvi, the highest temperature ever recorded in Israel). A Sharav depression (warm cyclone) reached Israel from North Africa, which is unusual for the main summer months (it mostly occurs in spring). As a result there was a sharp rise in temperatures, which reached 40-42°C in the Coastal Plain, the Northern Valleys and the northern Negev, 42-43°C in the central Negev, 37-39°C in the Coastal Strip and 34-36°C in the mountainous areas. In the Jordan Valley and the Arava 43-46°C were measured with some places even warmer: Paran (central Arava) measuring 47.1°C, Hazeva (northern Arava) 48.5°C and the aforementioned 49.9°C in Sedom. The relative humidity was very low (10%-25%) in all areas, including the Coastal Plain which normally is humid in summer, with relative humidity values of  60%-70% at noon.