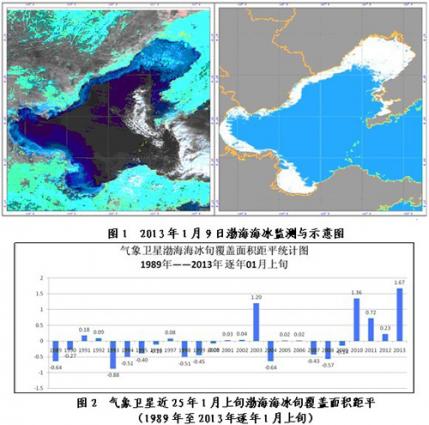 On January 9, the monitoring from FY-3 meteorological satellite shows that the Liaodong Bay, Bohai Bay and Laizhou Bay have been covered by sea ice. In Bohai, the area of sea ice covers about 24,700 square kilometers.

It is reported that since 1989, the largest area of sea ice in Bohai was about 21,800 square kilometers in 2010. In the past 25 years, the average area of Bohai sea ice is approximately 9,200 square kilometers. In the early January of this year, the sea ice area in Bohai reached the highest level, 2.5 times more than the average compared with the same period in the past 25 years. The amplification of the sea ice area is related with the frequent cold air activities. If the cold air continues to affect Bohai seas, the sea ice area may further increase. >> More