“Let us remember this as a Blue COP” 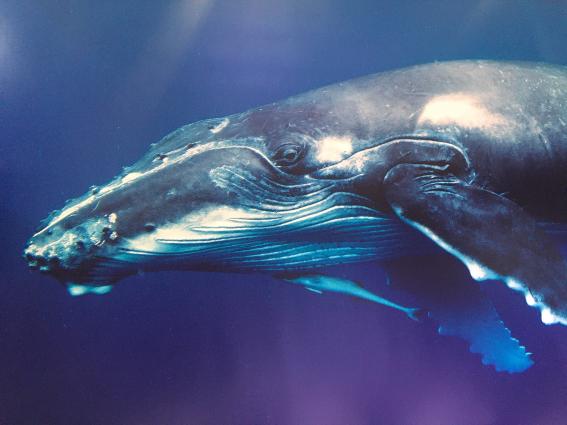 “Let us remember this as a Blue COP”

Chile, in its role as presidency, designated the UN Climate Change Conference, COP25, as the ‘Blue COP,’ in order to increase awareness of the impact of climate change on the ocean and to harness ocean science to support climate action.

COP 25 President Carolina Schmidt, Minister of Environment, Chile, and HRH Albert, Prince of Monaco, jointly launched the Platform for Science-Based Ocean Solutions, which stresses the need to address ocean and climate issues synergistically and to factor in potential marine nature-based solutions in national climate commitments and strategies to implement the Paris Agreement.

Recognizing the critical role of the ocean in climate solutions, this new Platform will be open to all, to develop tools and methods for adaptation and enable solutions.

“Let us remember this as a Blue COP,” said UN Ocean Envoy Peter Thomson of Fiji, stressing the need to incorporate the study, protection and sustainable management of ocean within the mainstream of the UN climate change conferences.

The Intergovernmental Panel on Climate Change presented its Special Report on the Ocean and Cryosphere in a Changing Climate. It said there is overwhelming evidence that global warming is resulting in profound consequences for ecosystems and people. The ocean is warmer, more acidic and less productive. Melting glaciers and ice sheets are causing sea level rise, and coastal extreme events are becoming more severe. 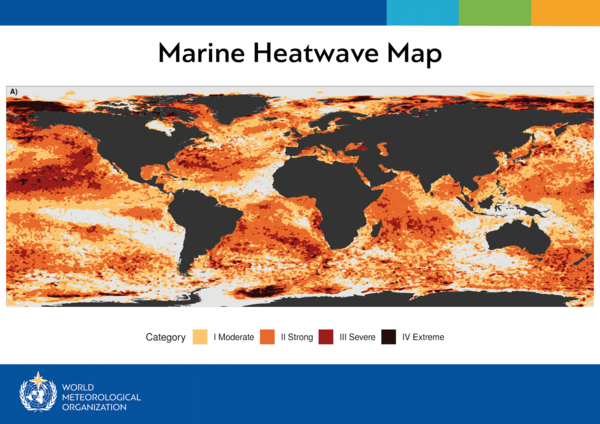 WMO’s Provisional Statement on the State of the Climate in 2019, released at COP, said that sea level rise has accelerated since the start of satellite measurements in 1993 partly because of the melting of ice sheets in Greenland and Antarctica. Sea water is 26 percent more acidic than at the start of the industrial era. Ocean heat is at record levels and there have been widespread marine heatwaves. So far in 2019, the ocean has on average experienced around 1.5 months of unusually warm temperatures.

“The warming of the ocean has given more energy for tropical storms. Tropical cyclone Idai hit Mozambique as the strongest cyclone hitting the southern hemisphere in 100 years. Hurricane Dorian hit the Caribbean islands and the Bahamas lost 25 percent of its GDP in one day,” WMO Secretary-General Petteri Taalas told the opening of the high-level segment of COP on 10 December.

IPCC-WMO Science pavilion and side events

The IPCC-WMO Science Pavilion was sponsored by Chile’s Meri Foundation, a philanthropic initiative to promote the conservation of biodiversity, and the marine, freshwater, terrestrial and cultural heritage of Chile, especially northern Patagonia.

There were at least 87 events related to the ocean. The Chilean presidency hope is that this will influence the Parties to consider using ocean-based mitigation and adaptation strategies within the NDCs.

Many events highlighted concern for climate change impacts on Polar regions and Small Island Developing States, which are being hit hard by sea level rise, marine heatwaves and impacts on coral reefs and fisheries. Port infrastructure – critical transport and food supply points – is likely to be impacted by more storms and sea level rise.

A UN Ocean Side Event ‘Raising the ocean ambition in climate’ included a presentation from Agnes Kijazi, WMO 3rd Vice President and Permanent Representative of Tanzania. 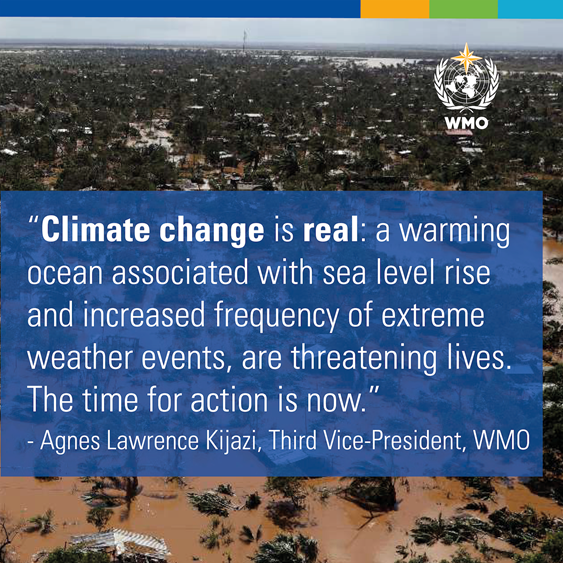 She gave examples of sea level rise, coastal impacts and tropical cyclone frequency and severity in Africa, including Tropical Cyclone Idai which killed hundreds of people, displaced tens of thousands, destroyed houses and crops, with cascading impacts on  food security and health in Mozambique, Zimbabwe and Malawi.

A WMO-IPCC-FAO side event focussed on " State of climate services report: lessons learned and ways forward for “leaving no one behind” in SIDS."

WMO also organized a side event on “Ocean Regions and a Changing Climate: Polar and SIDS Perspectives” in the IPCC-WMO Pavilion. This offered the opportunity to join the Polar and SIDS ocean regions - with fragile ecosystems and areas where populations are reliant on the blue economy and vulnerable to changes in climate.

“What is happening in the Arctic is having an impact on Fiji. We are seeing a boost in the melting of glaciers which is impacting sea levels in the southern hemisphere,” said Mr Taalas, for WMO.

UN Ocean Envoy Thomson praised the WMO community for the huge improvement in weather forecasts and communication of the impacts to save lives and help people be better prepared.

WMO and the Korea Meteorological Administration funded a coastal inundation demonstration project, which ended last month and which significantly improved the forecast of coastal inundation across the Fiji Islands.Tropical Cyclone Winston hit Fiji in February 2016 with the equivalent of Category 5 winds.

“Fiji has started to relocate the most vulnerable communities. But some islands – such as the Marshall Islands where the highest point is the landfill, or coral atoll nations such as Kiribati – , cannot,” he said. 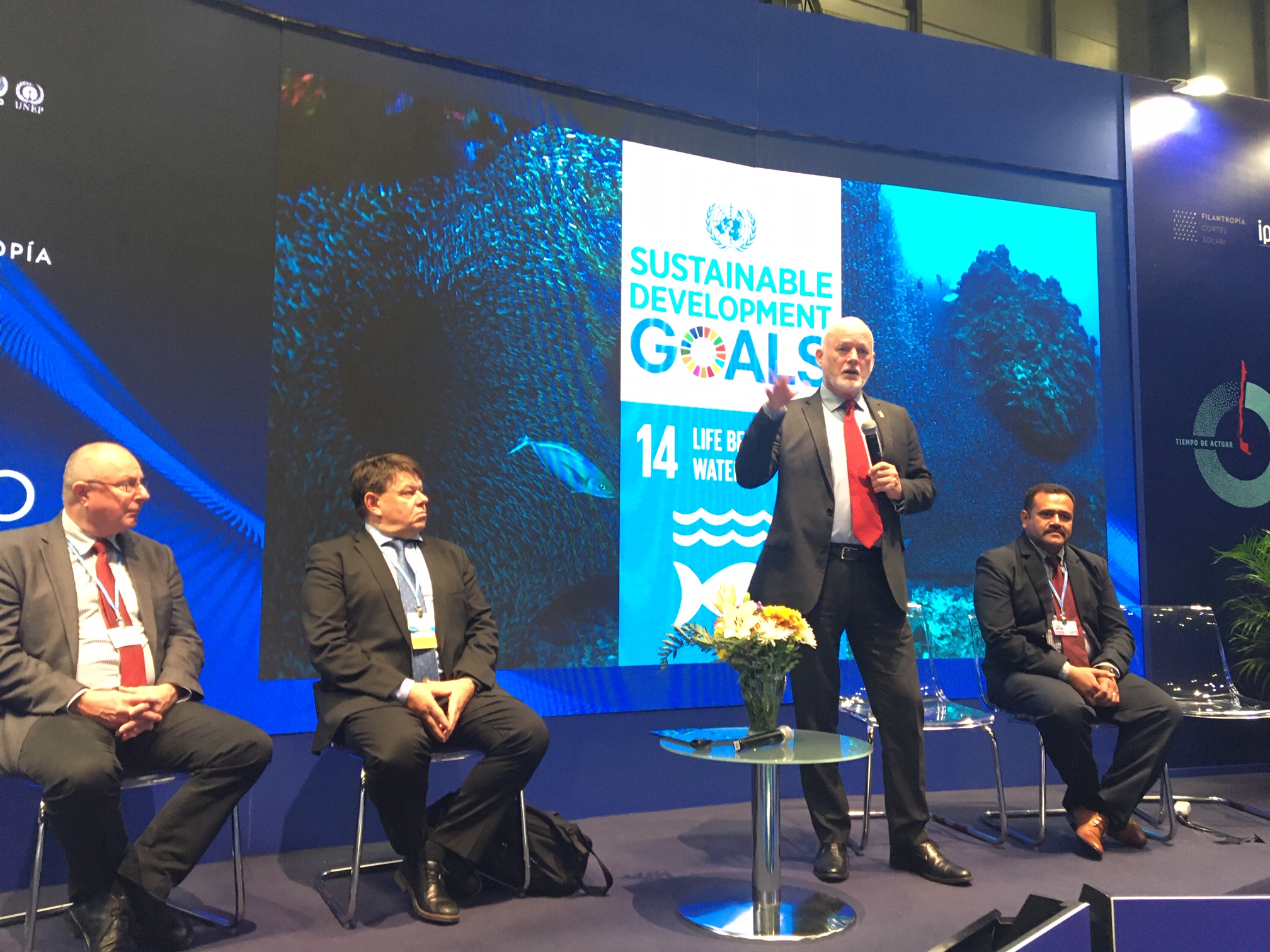 The Permanent Representative to WMO of Iceland, Árni Snorrason, presented the Arctic perspective. He said it was vital to: